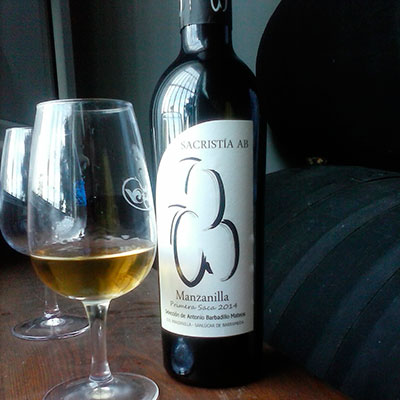 A member of the extended Barbadillo saga, producers in Sanlúcar de Barrameda since 1821, Antonio Barbadillo Mateos launched his own project in 2010, after having grown up and worked in the family estate for several decades.

He doesn’t have a winery. Instead he visits Sanlúcar producers to select casks that draw his attention “for their candour” and he bottles wines in seasonal sacas (extractions) under the brand Sacristía AB. He chose the name to honor his personal commitment to quality: his initials, AB, and sacristía, which is the name used in the area to refer to a corner in the winery where the best wines are stored.

He started his project with two wines but he plans to expand the range in the near future. Sacristía AB manzanilla is a selection of old soleras aged for eight to 10 years under flor and bottled en rama, without filtration, in small 37.5 cl format (€16, 4,000 bottles in each saca) and in magnum (150 on the first saca, in 2013) priced at €110. According to Antonio, stating the bottling date is important to prove that great biologically aged wines “do not deteriorate in the bottle”. Instead, they can evolve and turn into complex and elegant wines with very different aromas to young wines.

His manzanilla, golden colored and concentrated, comes since 2018 from Bodegas Orleans in Sanlúcar. Until the 2018 saca, he used to draw the wine from casks belonging to Bodegas Francisco Yuste, a new winery in the region which has purchased historical soleras like Conde de Aldama’s, some of Pedro Romero’s and recently Argüeso. The first casks selected by Antonio Barbadillo for his Sacristía AB came from Sánchez Ayala, an almacenista with a winery in Sanlúcar’s Barrio Bajo district, where Equipo Navazos has sourced some of its legendary manzanillas.

His first Sacristía AB Amontillado, released in 2014, also came from old soleras owned by Bodegas Francisco Yuste but it now comes from Orleans. Dried fruit (hazelnut) aromas and saline mineral notes stand out in this amontillado (€78, 50cl capacity) with great personality and an original label split in two parts and designed by his son Antonio, who is behind the brand’s logo. Another of his sons, Álvaro, has applied his knowledge of marketing and business administration to help with Sacristía AB’s strategy, a project where his wife Mª Ángeles and his other two sons are also involved.

Antonio Barbadillo also sells a very old Oloroso (50cl, €78) which he selects from Bodegas Urium and a limited release Palo Cortado from Juan Piñero with over 90 years of age (50cl, €119)

His third wine, launched in 2015, is Sacristía AB Oloroso, which unlike his other wines, has been selected from a winery in Jerez.

Sherry 101: An introduction to styles and pairings
Spain’s best somms reveal their top Christmas wines
Sherry Festival in San Sebastián: Our top 10 wines
A complete Sherry guide: our best articles about the region
From our archive: a sherrylover’s guide to the region and its wines