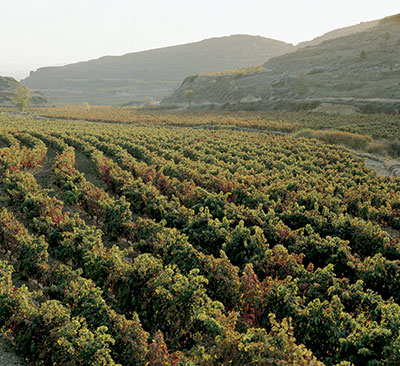 This was the first prominent venture of the now famous Eguren family in Rioja. It perfectly exemplifies the origins of its single vineyard wines spread across different wineries since they carried out a masal selection of its oldest vineyards in the eighties.

La Canoca vineyard, planted in 1985, provided the grapes for San Vicente: 18 hectares of trellised vineyards with high plant density geared to obtain yields of approximately one kilo per vine. They lie on calcareous clay soils and rugged terrain on the south facing slopes of the Sierra Cantabria hillside. The variety is Tempranillo peludo, a type of Tempranillo with a characteristic furry leaf underside. A manor house in San Vicente de la Sonsierra was restored to act as an independent winery. The wine, San Vicente, was unveiled with the 1991 vintage and it brought a revolutionary change. For the first time, a red wine from the modern era dared to disregard the traditional Crianza sign and was sold with the same back label as a young wine. The meaning between the lines was that the amount of time spent in oak was not a synonym of quality. Rioja had woken up to modernity and the Eguren family would become one of its most staunch advocates.

The concept of wine (one vineyard, one variety, one winery, one wine) has remained intact until today. The use of French oak has increased from 40% to 90%. The only vintages with no production were 1992 and 1993. With approximately 50,000 bottles and a retail price of about €35, it is one of the most affordable labels within the Eguren family premium range. It is a fruit-forward wine, with distinct power and unctuous texture as well as optimum bottle potential.