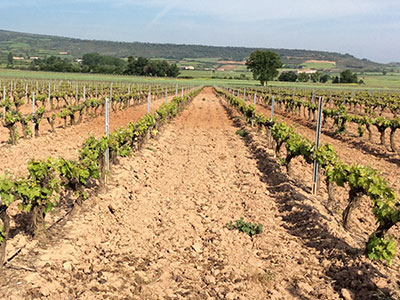 The current winery was built for the 2001 vintage, with grapes sourced from a 150-hectare estate, 32 of which are under vine. It is located in the Iregua Valley, between the villages of Nalda, Sorzano and Entrena. Behind the project was Gregorio Martínez, a well-known Rioja entrepreneur operating in the building and excavation sectors who in the 1970s started to buy land around Sorzano, his wife’s home town.

Currently managed by his descendants, the project changed dramatically after the arrival of winemaker Ricardo Cantera in 2009. They used to sell grapes to other wineries and make a classic range of wines based on the Crianza, Reserva and Gran Reserva categories but now they have started making a new range of fresh reds and whites. Cantera has patented an energy-saving system that uses the carbon dioxide that is naturally generated during fermentation to break the cap from the inside of the vat through a mushroom-shaped device which spews the wine as if it were a volcano. Another advantage of this system is the ability to work with very low quantities of sulfites.

At 700m of altitude and north-oriented, the vineyard suffers under these extreme climate conditions. Harvest never starts before the second week of October and in some years it may finish in November. With up to five different clones grown on the estate, Tempranillo is the dominant grape while Mazuelo (Carignan) and Viura cover around two hectares each.

The new range under the brand Finca Gregorio Martínez (all wines around €9.5 in Spain) includes an exotic, minty white Viura; a vibrant, pale-coloured rosé made from Tempranillo and Mazuelo (the first is fermented in stainless steel tanks, the latter in barrels) and aged in oak for 14 months plus two single-varietal reds made from Tempranillo and Mazuelo respectively. Both of them are light-colored and fermented at low temperature in stainless steel tanks almost as if they were whites. Curiously enough, malolactic fermentation takes place in the same tank with skins but on the glass these wines feel fresh and expressive with lots of herb flavours and aromas. It is challenging indeed to grow late ripening varieties like Mazuelo in such a cool area.

The two premium wines cost around €22 in Spain. Called Gregorio Martínez Selección Mónica Martínez, they include a Tempranillo and Mazuelo blend with more weight on the palate and lots of juiciness, and an oxidative-style white Viura aged for over 30 months in barrel. The grapes were macerated for 10 to 12 days with their own skins. Freshness and lively acidity counterbalance the wax, dried fruits and stewed notes of this wine which could still handle some extra cellaring.

Rioja in the 21st century: styles and categories of wine