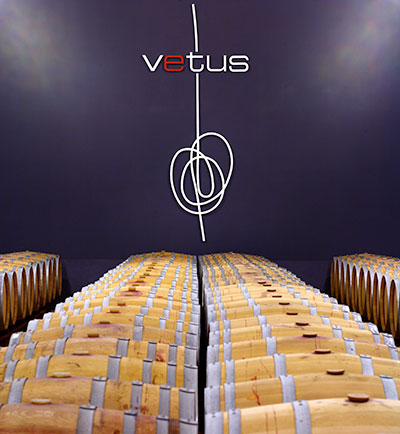 Bodegas Vetus was born in 2003 and belongs to Grupo Artevino, which includes Rioja-based wineries Izadi and Orben and Ribera del Duero-based Finca Villacreces. The basis of the project is a low-yielding 20-hectare single vineyard located in Toro. The name of the winery comes from the Latin word vetare (forbidden) – the winery's founders believe that “prohibition is the origin of attraction and curiosity”.

Wines in the portfolio show good fruit definition and good control of the powerful character that can be found in Toro. They include Flor de Vetus (8.5€) an entry-level red aged for nine months in 50% American and 50% French oak; Vetus (13€), its flagship red, which comes from a selection of the best plots in the vineyard and is aged for 12 months in the same combination of oak; and Celsus (26€), its premium wine whose name comes from Finca Villacreces and was used very occasionally. The grapes for Celsus are sourced outside the estate; they come from low-yielding pre-phylloxera vines -one of the great assets of this appellation- located in Morales de Toro. Only 2,000 bottles are made.
The Toro winery has served Grupo Artevino as a platform to get into Rueda with Flor de Vetus,a Verdejo which escapes from the boring, mass produced style that abounds in the area, and is made from old vines located in the most obscure part of the appellation, in the province of Segovia.

Since restrictions to use the same brand in different appellations were lifted, a large number of Ribera del Duero wineries have launched their own Verdejo, jumping on the bandwagon of Rueda's commercial success. Most of them are vinified at one of the large producers in this DO. The winery has an online shop.

Toro: the land of hearty reds and old vines