Winery Viña Nora | Spanish Wine Lover ﻿
This site uses cookies. By continuing to browse the site you are agreeing to our use of cookies.Cookies policy hidden 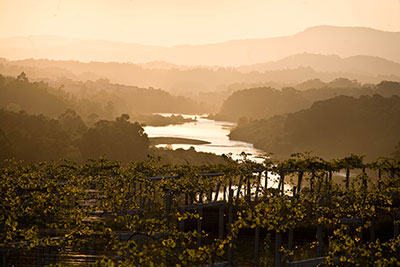 Founded in 2002 and part of the Avante Selecta group since 2007, Viña Nora is one of the leading wineries in Rias Baixas which has focused on working Albariño with its lees. The winery is located in As Neves, a small village in the inland subzone of Condado do Tea, which registers less rainfall than anywhere else in the appellation. Perched on a natural terrace overlooking the Miño river, vineyards are grown in terraces that descend towards the river, trellised with the traditional parral or pergola system.

Soils combine a distinctive granite character so common in Galicia with rolling stones. Due to the extra heat radiating from stony soils, grapes mature early giving way to more structure. The winery also manages other vineyards scattered across subzones of Val do Salnés, Ribeira do Ulla and Condado do Tea belonging to approximately 100 growers.

All wines are 100% Albariño and ferment in stainless steel tanks except for top Nora da Neve, which is barrel-fermented. Selected yeasts are the norm, although they must be neutral in style, so that the character of Albariño is preserved.

The winery produces around 250,000 bottles per year distributed in three labels. Val de Nora (90,000 bottles, €8.5) is the entry level white with grapes coming from associated grape growers working in different sub-areas within the appellation. Nora (115,000 bottles, €11.5) is the flagship label that has helped to gain a high-quality reputation for the brand. It comes from grapes grown in the Condado do Tea subzone; after fermentation, the wine ages with its lees in stainless steel tanks for a few months. Finally, top Nora da Neve (15,000 bottles, about €22) ferments and ages for about six months in 600- and 225-litre casks. It comes from a particularly stony vineyard found next to the winery that provides great structure and volume combined with selected vineyards from the cooler area of Ribeira do Ulla. The brand has proved that Albariño and oak can work together in order to make high-quality white wines in Rías Baixas.