Bodega Naia Rueda | Spanish Wine Lover ﻿
This site uses cookies. By continuing to browse the site you are agreeing to our use of cookies.Cookies policy hidden 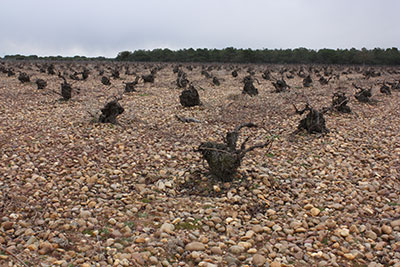 Founded in 2002 and part of the Avante Selecta group since 2007, Bodegas Naia is located in the village of La Seca (Valladolid), reputed for its high-quality Verdejos. Here the company owns 23.5 hectares - 20 of them are bush vines over 40 years old in a single vineyard; two more are trellised vines while the rest are 35-year-old Viura plants. They also buy grapes from local growers who own very old plots ranging from 80 to 130 years old.

Bodegas Naia is a renowned Verdejo producer. Avante Selecta’s technical manager Eulogio Calleja was one of the founders of Viña Nora and knows Rueda like the back of his hand. He defends the grape’s ability to make structured whites like “a red variety with no colour” and thinks that Verdejo is more expressive on the palate rather than on the nose. The Segovia clone, he says, is the one that more accurately fits this style of Verdejo.

Most wines ferment in stainless steel tanks at Viña Nora but two 10,000-litre French oak vats are also employed. “Quality doesn’t necessarily involve oak but I like a touch of wood in Verdejo”, says Calleja, who recalls that white wines from Rueda were traditionally fermented in foudres.

Roughly 840,000 bottles are annually produced. Except for the single varietal low-production Sauvignon Blanc S-Naia (17,000 bottles, €6.5), wines are made from Verdejo, the local grape variety perfectly adapted to the harsh Castilian climate. The entry level and on-trade focused K-Naia (310,000 bottles, about €5.5) is the only one that includes a small percentage of Sauvignon Blanc in the blend. Naia (210,000 bottles, €9) is a 100% Verdejo that benefits from 15% of oak-fermented wine which adds complexity to the mix. It is made from 35 to 45-year-old vines and is stirred with its lees for 4 months in order to obtain well-defined and expressive fruit and extra volume on the palate.

Finally, the top Náiades (19,400 bottles, €20) is sourced from very old vineyards located in different parts of the region, around the villages of Matapozuelos and Tordesillas in Valladolid, Segovia and some pre-phylloxera sandy plots located in Madrigal de las Altas Torres (Ávila), the birthplace of Queen Isabella of Castille and supposedly one of the most important sources of Verdejo in the early 16th century. The wine ferments in 225-, 500- and 600-litre casks where it ages for seven months. No doubt this is one of the top whites in Rueda, showing the quality of the grapes with which it is made and capable of developing in bottle for at least five or six years after bottling.