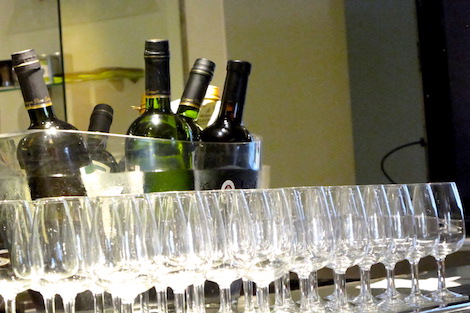 Thousands of manzanilla, fino and other fortified wines will be poured this week to celebrate International Sherry Week with events across the world on the first week of November. Aside from these activities to promote these wonderful little known wines, there are plenty more events for wine lovers across Spain. Check our agenda throughout the month for updates!

2-8 November. Sherry Triangle wines celebrate their International Week with all kinds of events across the world in countries such as the US, México, New Zealand, Brasil or Japan. The list of activities in Spain includes a tasting of eight wines from Bodegas Tradición coming from different criaderas or aging stages at Reserva y Cata wine store in Madrid (Conde de Xiquena, 13; €25 and includes a bottle of Fino Tradición), a tasting of El Maestro Sierra wines paired with tapas and flamenco at Peña Bulería in Jerez or a workshop pairing salted meat and fish with sherry wines led by Pepe Ferrer, Sherry Wines Ambassador in Gastronomy. Check the calendar of events around the world.

5 November. The 1989 vintage was one of the earliest ever in the history of Bordeaux with summer temperatures reaching unseen levels since 1947. There were concerns about the grapes’ low acidity and the possibility of wines unfit for long aging. Such fears proved to be unfounded —reds are opulent, rich and superlative. Today’s tasting at El Mostrador de Vila Vinoteca (General Díaz Porlier, 45), will be led by sommelier David Martínez, who will uncork gems like Château Palmer; Château Pichon Longueville Baron; Château Montrose and Château Latour. But that’s not all —as a starter, David will prepare a mini-vertical of three Latour wines from Pauillac. Time: 20:00 - 22:00 Price: €225

5-15 November. Most Festival in Catalonia’s Penedès features some very interesting films about vineyards, wine and cava culture. On this fifth edition of the festival several films will be screened such as Chasselas Forever, Insecticide Mon Amour or Jerez & el Misterio del Palo Cortado followed by a wine and cheese tasting. On November 6th there will be a chance to try the wines  featured on Jerez & el Misterio del Palo Cortado with José Luís Jiménez, who has studied the influence of sherry in fiction and Òscar Guitart, a Catalan sommelier with a gift to explain sherry. Tickets can be purchased at the festival’s website with prices ranging between €4.5 and €25.

6 November. Xabier Sanz, from Proyecto Zorzal, will finally not be able to be at Vinoteca Belostikale (Belostikale, 8) in Bilbao to present the wines he makes in Navarra. Instead, the store has put together another tasting with the following wines: Sant Jeroni 2013 (PX, Garnacha Blanca, Viognier) de DOQ Priorat; Fuentenarro 4 meses 2012 (Tempranillo) DO Ribera del Duero; Zorzal Graciano 2013 DO Navarra; Zorzal Corral de los Altos 2013 (Garnacha) y CF de Altolandon 2010 (Cabernet Franc) DO Manchuela. Information and bookings on: +34 94 679 38 51 Time: 19:30

7 November. After the row over the announcement of its departure from the DOCa Rioja, Juan Carlos López de Lacalle, owner of Bodegas Artadi in Laguardia, has organized a conference under the name Denomination of Origin: Identity and Differentiation. The vent will be held in Laguardia (Palacio de Samaniego)and includes round tables and debates with leading winegrowers such as Álvaro Palacios, Daniel J. Landi, Pedro Balda and Telmo Rodríguez. Former Basque prime minister Juan José Ibarretxe will also be there talking about "culture and identity". Time: 09:30 - 18:00 Price: €10, €25 with lunch.

7 November. Priorat holds a fun wine event called Tasta Porrera where visitors have the opportunity to taste wines from the 15 or so cellars along with a couple of the side projects produced using fruit from this Catalan village. Lunch will also be provided after the tasting (8 €) and there’s a chance to buy the wines you try. Time: 11:00 - 14:00 Price: 12 € More information on 630 941 959

9 November. After their debut in Bilbao last month, Experiencia Verema travels to Barcelona's Maritime Museum. More than 100 Spanish wineries will offer their wines to professionals and aficionados. The tasting is free for Verema subscribers. Time: 12:00 - 21:00

9 November. Sherry producer Delgado Zuleta (Avda. Rocío Jurado s/n) is behind  Gastrocádiz 2015, an open-door day event to celebrate the region's cuisine with a tasting and sale of local foodie products. Several chefs from the area will hold live show cookings; their dishes will be paired with Delgado Zuleta wines (including their gorgeous Goya XL!) by Pepe Ferrer, Sherry Wines ambassador. Time: 10:30 - 15:00 Further information on +34 956 360543

10 November. Marcial Dorado is a winegrower from Galicia who tends 13 hectares of vineyards on the Portuguese side of the river Miño. His vines are primarily Alvarinho and his wines —complex and meant to be laid down despite having no oak treatment— are among the most respected whites in the Iberian Peninsula. Today he will be at Velo de Flor, a wine bar in the Basque town of Zalla (Artebizkarra 17) where he will uncork different vintages of his wines, Dorado and Auratus. Time: 20:30  Bookings: +34 946 39 14 95

12 November. Alicante's Auditorium will hold the Monastrell Variety International Congress, where producers from Alicante, Murcia, Albacete and Valencia along with others from France and Australia will talk about this grape. Speakers at the conference include Pedro Ballesteros MW, who will talk about the opportunities for Monastrell wines in international markets and a pairing of wines from this variety led by Spanish food critic Rafael García Santos. Chef  Quique Dacosta (3 Michelin stars) will present a dish to all congress goes using a traditional local sweet wine called Fondillón. Price: €40 (€60 with lunch).

14 November. If you have young children and enjoy nature and wine you may fancy a walk around Cañada Real nature centre for wounded animals in El Escorial. Child minders have prepared various fun activities for the kids while adults taste five wines (brands not available) provided by retailer Tomevinos paired with La Cabezuela cheese. Time: 11:00 Price: €20 adults and €10 children Bookings: +34 91 859 6830

14 November. Retailer Majuelos Singulares in Valladolid (San Ignacio, 9) has invited writer Jordi Melendo to present his Champagne Guide, which will be followed by a tasting of Champagnes and Cantagrullas cheese. Time: 12:30 Price: €12 More information on +34 983 370974

16-17 November. Wine has managed to find a discreet space at Forum Gastronomic de Girona with four sessions spread over two days. On November 16th, wine writer Joan Gómez Pallarès will talk about the moon’s influence on wines (16:00). The following day, Josep Roca (El Celler de Can Roca, 3 Michelin-stars), will lead a workshop that combines music, wine and the senses (11:30). This activity will be followed by a tasting of Mediterranean wines by sommelier Carlos Orta, who works at Villa Mas, a wine-friendly restaurant in Sant Feliu de Guíxols (13:00) and ends with a tasting of top wines from the Sherry Triangle led by Pepe Ferrer (16:00). Price: €20 per workshop (except Roca’s, which costs €50). Inscription is necessary.

17 November. Bodega Urbana in Bilbao (Gran Vía, 66) presents a tasting with Víctor del Campo, director of the International Print Fair (@figBilbao) which will be held in the city  this week. Three Garnachas will be on show (Camins del Priorat, Garnacha Centenaria by Coto de Hayas and 7 pulgadas by Rubor Viticultores en Cebreros) while attendants talk about wine, art and print. Time: 20:00 Price: €15 Bookings on +34 94 4416181

18-19 November. Restaurant Surtopía in Madrid (Núñez de Balboa, 106) organizes a sherry-paired dinner presented by Armando Guerra, owner of Taberna der Guerrita in Sanlúcar de Barrameda and one of the great ambassadors of the wines from the Sherry Triangle. Time: 20:30 Price: €50

19 November. Coinciding with the third Thursday of November, Los Quesos de L’Amélie in Madrid (Torrecilla del Puerto, 5 Local 1) holds its own Beaujolais Nouveau party. The new 2015 vintage will be paired with assorted cheeses specially prepared for the occasion. Booking is not necessary.

19 November. Mariano García, owner and winemaker at Bodegas Mauro, presents his wines Mauro, Mauro VS, Prima and San Román in Piñera restaurant in Madrid (Rosario Pino, 12). A menu prepared by chef Jesús Almagro will be served after the tasting. Time: 20:00 Bookings and information on +34 914 251 425

21 November. Barcelona producer Alta Alella (Camí Baix de Tiana s/n, Alella) holds a blending workshop with a chance to try three white wines from the 2015 vintage as well as its AA Laius blend. Winemaker Vicenç Albany will explain how a blend is defined and created while wine lovers make their own blend. Price: €20 Time: 16:30 Bookings on +34 628 624182

23 November. Monvínic in Barcelona (Diputació, 249) presents Monvínic Experience which on this edition encompasses music, humour and wine. Gonzalo Rubalcaba, Afro-Cuban pianist and contemporary jazz personality will put the music; comedian Carlos Latre will bring on the laughter and Quim Vila, owner of wine store Vila Viniteca, will take care of the wine selection. Price: €175. Bookings on +34 932 726 187

26 November. Marqués de Riscal’s technical director, Francisco J. Hurtado de Amézaga, will lead a horizontal tasting of four of the Rioja producer’s most representative wines in the 2010 vintage. The tasting, which will be held at Bodega Santa Cecilia (Núñez de Balboa 103, includes: Marqués de Riscal Reserva; Arienzo; Finca Torrea and Chirel. There will be snacks after the tasting. Price: €24 Time: 19:00 - 20:30

26 November. Natural wine specialist restaurant Solo de Uva (Príncipe de Vergara, 210) in Madrid will hold a monthly tasting to introduce young people into the world of wine, those who think there is no life beyond calimocho, a popular drink with red wine and cola. Three wines will be tasted followed by a few snacks to eat. Time: 19:30-21:00 Price: €15 Bookings on +34 914 267405

26 November. Agullers, Consellers and Canvis Vells streets in central Barcelona will hold retailer Vila Viniteca's presentation of the new 2015 wines from wineries such as Abel Mendoza, Artadi, Castaño, Gramona, Llopart, Raventós i Blanc or Muga, among many others. The wine list will be a accompanied with tapas and small bites from local restaurants such as Cal Pep, Escuela de Hostelería Hoffmann or La Vinya del Senyor. Time: From 17:00 Price: €5 Glass + wine tasting.

28 November. As part of its children's Wine Culture education programme, Vivanco Museum has prepared a series of talks and encounters with some representatives of Spain’s cultural world. Today is the turn of artist Ouka Leele, who will show kids how to combine textures in leaves and wood and will chat with adults about her experience as an artist working alongside designer Javier Mariscal or film director Pedro Almodóvar. Time: 11:00-13:00 for children and 20:00-21:30 for adults. Price: €3 for kids and €10 for adults. Inscriptions on reservas@vivancoculturadevino.es

28 November. As part of the the programme Otoño Enológico (Wine Autumn), Palacio Quintanar in Segovia holds the Rythm and Wine Fiesta with the six best wines in the 2015 Ranking of Mileurismo Gourmet blog written by Mariano Fisac. The party will include live jazz and a few bites to eat. Time: 19:30 Price: €7  More information on +34 921 414 322.  For those who cannot go to the event but want to get hold of the six-wine pack, they can be purchased for €65 (postage included for Spain) on A la Volé website. The proceeds will go entirely to a local charity called Neurofuturo Segovia.

30 November. Arturo and Kike de Miguel are the brothers behind Artuke, a winery which makes terroir-based wines from their vineyards in Ábalos, San Vicente de la Sonrierra and Baños de Ebro, where their winery is located. Members of Rioja ’n’ Roll, the new group of indie winegrowers who defend wines with their own identity and origin, will be present today at La Tavina (Laurel, 2) in Logroño to talk about their project and their wines. Time: 20:30 More information on +34 941 10 23 00

30 November and 2 December. Guía Peñín holds its Salón de las Estrellas tasting in Barcelona (30th, World Trade Center) and Madrid (2nd, Chamartín Railway Station Attic) presents wines which have been awarded four and five stars for being good value for money, with a special focus on organic wines. The tasting is open to the public between 17:00-20:00. Tickets cost €15

Do you know of any interesting wine events which are not on this list? Are you a restaurateur or retailer who organises tastings or wine events for the general public? Send us your calendar for free to info@spanishwinelover.com