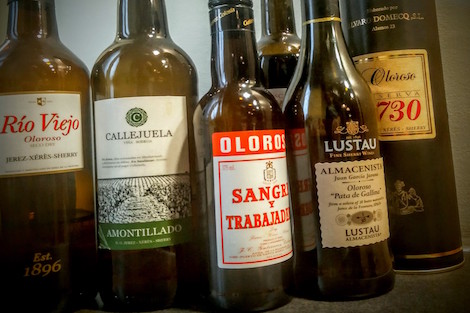 Wines from the Sherry Triangle will be on show in Valencia during the Sherry Festival Photo: Yolanda Ortiz de Arri

Over 180 national and international producers will show their wines at Música del Vi, a one-day showroom organized by Vila Viniteca which this year is held in Barcelona on the eve of Alimentaria, Spain largest food and wine biannual trade fair.  One day earlier, on April 24, 130 pairs of contestants will try and guess which wines they are tasting blind in order to claim the €20,000 prize. Tickets were sold out within minutes of being on sale, but wine lovers may attend and taste wines from about 50 (mostly Spanish) producers who exhibit their wines as the competition is being held. Remember to come back to this page for updates on further wine events across Spain this month.

1 and 2 April. The fifth edition of Vinofest, Navarra's wine festival, takes place in Pamplona with 24 producers based in this DO who will present their wines at the city’s Baluarte Congress Centre. Osasuna football club coach, Enrique Martín Monreal, will officially launch the festival. Times: Friday 18:00 - 21:00 and Saturday 11:30-14:30 and 18:00-21:00 Price: €6 which includes a free wine glass. Vinofest continues on the weekend starting April 8th at the wineries, with various activities for visitors.

1-30 April. The Empordà region holds the third edition of Vivid, with a month full of all kinds of wine tourism activities such as a wine-based cocktails workshop, sommelier-led tastings, hiking routes, winery tours, exhibitions and even a wine & kayak circuit. Prices vary based on the chosen activities, which are her in various villages around Empordà. Vivid festival will finish its activities with Arrels del Vi, a one-day fair which takes place on 30 April in Born Market in Barcelona with 19 Empordà producers and three guest wineries from Rousillon. Time: 12:00-21:00 Price: €20

2 April. Madrid-based natural wine retailer and restaurant Solo de Uva (Príncipe de Vergara, 210) organizes its Spring Wine Festival 2016 to publicize “natural, alive, clean wines or whatever else we want to call it”. Wines such as Ossian, Las Moradas de San Martín, Gran Cerdo, Viña Enebro or Ziries, among others, will be available to taste. Time: 11:00-18:00. Price: €10 per person. Booking is not necessary.

6 April. Miguel Martínez is a young producer who grows 10 hectares of organic vineyards in Sojuela, a cold and difficult area in Rioja, following his grandfathers’ traditions. At this Ojuel tasting, organized by Lo Mejor del Vino de Rioja, Miguel will present the following wines: Ojuel Blanco Fuente de León 2015 (Tempranillo Blanco and Garnacha Blanca); Ojuel Tinto from the 2013 and 2014 vintages (Tempranillo, Garnacha and Maturana Tinta) and Ojuel Supurao from the 2013 and 2015 vintages. Location: Hotel Gran Vía in Logroño. Time: 20:30 Price: €6

6 and 27 April. Wine retailer Lavinia in Madrid (Ortega y Gasset, 16) organizes a series of tastings to present the wines of Grandes Pagos de España. On the first day the tasting will be led by Toni Sarrión, of Mustiguillo, although there will be reds, whites and sparkling wines from other producers in the country, while on April 27 it will be the turn of Isabel Salgado, winemaker at Bodegas Fillaboa and Marina García, winemaker at Finca Moncloa and Secastilla. Tastings will continue on May. Time: 19:00 Price: €10

11 April. The Verema Experience moves to Palma de Mallorca (Sala Magna del Pueblo Español) where over 60 Spanish producers and distributors will present their wines. Inscription is free but a €5 glass deposit is requested and will be reimbursed after the event. Time: 12:00 - 21:00

6, 13, 21 and 27 April. The Unión Española de Catadores (Lope de Vega, 27) presents in Madrid a selection of wines which have won a medal at the Bacchus 2016 awards. Sessions, held over four different days, include 15 wines each and are themed as follows: Rioja 2012 and 2013, Ribera del Duero 2012 and 2013, Bargains and Collectibles and Noble Wines. Members who sign up for at least three presentations will will be given two bottles of Bacchus Awards participant wines. Time:19:00  Price: €10 (UEC members) – €20 (non members).

14 April. Iberico products from Guijuelo and Jabugo and wine are the main attractions in tonight’s paired dinner in Enotoca Barolo (Príncipe de Vergara 211, Madrid. Hams, sausages and lomos will be matched with Champagne, Cava, reds from Ribera del Duero, fortified wines and a sweet surprise for the caramelized torrija dessert. The tasting will be led by sommelier Félix Lanz. Time: 20:30  Price: €40. Further information on +34 91 745 1927

14 April. For TV series fans, Espai Penedès in Barcelona (Muntaner, 24) organizes a cycle of wine & TV series which have been important in our lives. This month series is Game of Thrones and the idea behind this tasting is to discover five Penedès wines which fit characters like Tyrion Lannister, a great wine drinker in the series. Wines will be paired with artisan cheese and the tasting will be led by a sommelier and two writers of specialist magazine Serielizados. Time: 20:00 Price: €19

14 April. The Cloister of the Romanic monastery of San Sebastià dels Gorgs will hold a tasting of Sumoll wines with the presence of a great deal of producers from Penedès such as Can Ràfols dels Caus, Celler Pardas, Clos Lentiscus, Jané Ventura or Vins de Foresta. The tasting will be led by wine critic Joan Gómez Pallarès. The following day, at Can Ràfols dels Caus estate in Avinyonet del Penedès, there is a chance to taste wines from 12 producers working in the Garraf mountains near Barcelona, with the presence of some of the producers mentioned earlier and more.Time: 20:00 Price: €10

15-24 April. After previous editions in Madrid and Barcelona, the Sherry Festival moves onto Valencia. The main event will take place on April 18 at Hotel Balneario Las Arenas with a professional showroom with over 200 brands from across the Sherry Triangle. The programme includes tastings, workshops, gourmet experiences, paired dinners and special promotions.

16 April. Celler de L’Aspic (Miquel Barceló 31) in Falset (Tarragona) organizes a dinner and tasting with the wines of Mas Alta from Priorat and Tardieu-Laurent from the Rhône which will be led by winemakers Bixente Oçafrain and Michel Tardieu. Time: 20:30. Further information on +34 977 831 246

17 April. The Guía Peñín Wine Tasting School in Madrid (Gran Vía, 16) joins in the Malbec World Day celebrations with two tasting sessions. Participants will learn about production areas, soils, climate and production in Argentina, where Malbec arrived in 1853. Most of the wines will be from Argentina but the organizers warn they might be some surprises. There will be two sessions: 11:30-14:30 and 18:00- 21:00 Price: €50 Further information and bookings on +34 914 119 464

17 April. Rioja Alavesa producer Contino holds a tasting of its wines at the winery in Laserna (Rioja Alavesa) paired with pintxos and olive oil from Rioja Alavesa. Time: 11:00 Price: €25

18 April.  Coinciding with this year's Sherry Festival in Valencia, wine storeTiza y Flor in Alicante (César Elguezábal, 31) has prepared a Sherry wine tasting led by Jesús Barquín, the man who has chelped to bring quality sherry back to prominence along with Eduardo Ojeda and their Equipo Navazos wines. Tiza y Flor is finalizing the list of wines to taste and the cost of the tasting, but we'll publish them as soon as they are available. Time: 20:00 - 21:15 Further information and bookings on +34 965 14 20 03

19 April. Vináliti tasting school in Málaga (Cortina del Muelle, 7) has invited winemaker Lauren Rosillo to present a mini-vertical of his wine Laderas del Sedella, made with the obscure Romé red variety on the slate slopes of the Axarquía mountains in Málaga, at around 750 meters of altitude. Vintages 2009, 2010 and 2013 will be tasted. Time: 20:30 Price: €15 (Free for members) Bookings on +34 952 218 906

20-24 April. The city of Córdoba holds the 23rd edition of Montilla-Moriles wine tasting with exhibitions, conferences, workshops and tastings with members of some of the leading wineries in the region such as Pérez Barquero, Toro Albalá, Bodegas Robles or Bodegas Alvear, among others. Tickets are for sale online and cost between 8 or 10 euros.

23 April. The Museum of Wine in Málaga (Plaza de los Viñeros, 1) presents a tasting of reds from Serranía de Ronda, a mountainous region with around 20 producers who make their wines very close to one of Spain's most touristy areas. A good opportunity to learn more about the region, soils, climate and styles of wine. Time: 12:30-13:30 Price: €15 Further information on +34 952 228493

23-24 April. The itinerant Torres Experience show travels to the Church Square in Altea (Alicante) where there will be over 60 wines and spirits form around the world to taste plus the chance to take part in cocktail and culinary workshops.  Time: 11.00 - 21:00 on Saturday and up 19:00 on Sunday. Tickets cost from €10 and can be purchased on the day or early on at the group's online store.

24-25 April. The 120 places to take part in the Tasting in Pairs Competition which distributor and retailer Vila Viniteca organises every year in Barcelona and Madrid alternatively were sold out in minutes, but there is a chance to attend the tasting and see which couple takes the €20,000 prize. Between the classifying stage and the final, the public can taste the wines served by over 50 producers at the Llotja in Barcelona (Passeig d’Isabel II, 1) as well as craft cheeses at lunchtime. Tickets (€15) can be purchased here. A day later, on April 25, La Música del Vi will gather 180 bodegas from across the world with a chance to try some amazing wines. Time: 11:00 - 20:00 Price: €150

25 April.  The eighth edition of Salón Vinoro gathers at the Ritz Hotel in Madrid (Pza. Lealtad, 5) a selection of Spanish wines which have won awards at various internacional competitions. It is a trade event during the day but doors are open to the general public in the evening. Time: 19:00 - 22:00 Price: €25

28 April. Tándem Gastronómico from Valencia organizes a Champagne tasting led by sommelier Eva Pizarro with a chance to taste wines from different terroirs and producers such as Jaques Lassaigne, Pascal Doquet or Rafael and Vincent Bereche. The tasting will be followed by a snack. Location: Fierro (Doctor Serrano, 4). Time: 19:00 - 22:00 Price: € 100

29 April - 1 May. The Priorat regions have prepared a wealth of wine activities this weekend. The first event starts at Castillo de Falset at 19.00 with a tasting of white wines from 40 producers based on DOQ Priorat and DO Montsant, followed by a festival of Cariñena wines from Porrera and the Nit de les Garnatxes, at Celler de Capçanes. The main events of the weekend are Tast amp Llops in Gratallops with first class producers such as Álvaro Palacios, Clos Figueras, Fredi Torres, Clos Mogador, Vall Llach or Sara i René Viticulture and Falset Wine Festival, with guided tastings, concerts, musical aperitifs, the super-hip food trucks and even a kids area. Check the programme for a full list of events.

29 April - 1 May. The Feira do Viño do Ribeiro celebrates its 53rd edition in Ribadavia (Ourense) with a programme including sports activities, wine & cooking workshops, magic show, balloon trips, guided winery tours and live music, among other thins. At the stands, visitors can taste wines made by regional producers such as Viña Costeira, Val de Souto, Ramón do Casar, Alter or Pazo do Mar among many others as well as taking part in tastings led by local sommeliers.