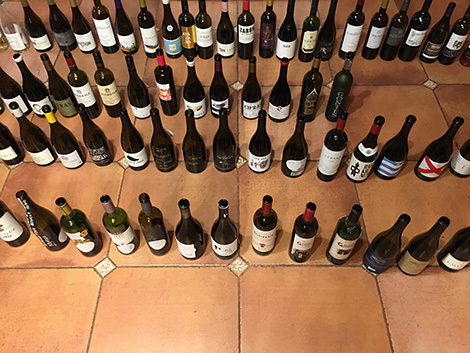 We have been enjoying many stimulating sips. Photo credits: Amaya Cervera.

Perhaps some of you share my feeling that spring challenges our resilience. I won’t say that I suffer from asthenia, but I often feel that my lack of my energy makes me an easy prey for viruses. Masks have proved useful this year, but nevertheless I have been experiencing annoying back pain and tension. My recipe to get through it is visiting a physiotherapist, a few pilates sessions, long walks with my dog and many stimulating sips and wine stories like the ones that follow.

Quite a few of them originated in Rioja and featured small, exciting producers and classic wines making a comeback. I also had the chance to explore different grape varieties and village wines as well as listening to the news of restless producer and Master of Wine Fernando Mora.

9 March. An inspiring preamble with Monopole

As winter slowly faded, Madrid woke up to one of those perfect sunny days with blue skies that lit up my first face-to-face professional wine tasting of the year. A group of us journalists gathered at the cosy terrace of Arzábal, a restaurant next to the Reina Sofía museum. Despite the required social distancing -we tasted in separate tables-, it was wonderful to see fellow colleagues in the flesh instead of meeting online. Cvne was presenting the new Monopole Gran Reserva. The tasting was hosted by winemaker María Larrea and CEO Víctor Urrutia, who welcomed us dressed in his old lab coat, in tune with the historic labels that have been recovered for the Gran Reserva.

Cvne has been producing whites since the 19th century. Monopole was registered as a brand in 1915. In the 1950s a small amount of Manzanilla from southern Spain was blended in to add some structure to the light, acidic, low alcohol (11% abv) Viura from Haro. As the style went out of fashion and demand dropped in the 1980s, the wine stopped being produced in favour of a young, fruit-driven white. But in the 2014 vintage, the tasty, mineral white re-emerged under the name Monopole Clásico. 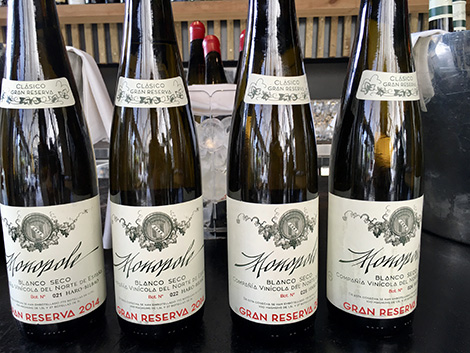 According to María Larrea, the new Gran Reserva takes ageing a step further -the wine remains in seasoned barrels for five years and Manzanilla represents 12% of the blend compared to 8-10% in the Monopole Clásico. Slightly oxidative and rich, the nose displays dried apricots, hazelnut, almonds and nutmeg and the palate is creamy and gorgeously sapid ending with a long, savoury finish. The bad news is that only 778 bottles have been produced. At €100, this is set to be Cvne’s most expensive wine.

Our advice for tight budgets is to get hold of some bottles of Monopole Clásico (€20) and age them at home. Do not mistake this with the young, widely available €6 Monopole that lacks the wonderful touch of Manzanilla. Surely, prices help to tell the difference.

The Cusiné family owns Castell de Remei, a historic property in Cataluña that bottled Cabernet Sauvignon as early as the 1920s. Additionally, Tomás Cusiné also works in mountain vineyards in Sierra de Prades where he successively launched Cérvoles Celler and Tomás Cusiné in DO Costers del Segre in the province of Lleida and a third winery called Cara Nord on the other side of the mountain, in land that belongs to the DO Conca de Barberà in Tarragona.
His latest limited-release wines, which I had the chance to taste online, explore the potential of different grape varieties grown on high-altitude vineyards which are part of the winery bearing his name. All the vineyards are organically certified since 2018.

It was interesting to compare Finca Barqueres, a serious, mineral, structured Cariñena aged for 24 months in barrel, with the joyful Carinyena Fantasía 2020 which felt lighter, fresh and straightforward, with blueberries and fresh herbal aromas. Garnacha del Triangle 2020, partially fermented with stems, was surprisingly full and balanced despite the 15.5% abv. Grapes for this wine are sourced from a plot planted in 1999 at 720 metres above sea level. Floral and spiced, this was one of the most expressive reds in the flight with depth, plenty of fruit and violet and pink pepper aromas. 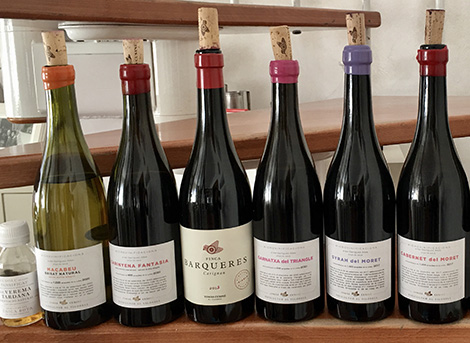 As for the international grape varieties, Syrah del Moret 2017 retained some floral and blueberry aromas despite having been aged in 600-litre barrels. The palate was ample, gentle and finely textured, very different from other Mediterranean Syrah wines that might feel heavy. I found similar richness and gentleness in Cabernet del Moret which was from the same vintage. According to Tomás Cusiné, despite the fact that his two wineries in the Prades mountains in DO Costers del Segre are barely five kilometres   away from each other, the wines display almost opposite styles. Whereas the ones produced at Tomás Cusiné in El Vilosell are gentle and supple like the aforementioned Syrah and Cabernet, those from Pobla de Cérvoles feel harsher and need to be tamed.

We also tasted a skin-contact Macabeo with no added sulfites. There were some oxidative notes on the nose, but the palate was full and creamy. Macabeo is Cusine’s benchmark white variety. “Grown at an elevation of 700 metres where alcohol can reach 14 to 15% abv., Macabeo provides structure and length to all our whites wines,” he said. This explains the planting of three additional hectares of this variety and the announcement that a white Gran Reserva is set to be released soon.

Online presentations let you move from one tasting to the next in the blink of an eye. In barely five minutes, I left behind the Catalonian mountains to travel to Ribera del Duero to taste the new vintage of Legaris village wines. This winery, owned by the Codorníu Raventós group, has been drawing attention to the remarkable character of several villages since the 2015 vintage. This is the third vintage of a project that, to date, has sourced grapes from the same two villages -Alcubilla de Avellaneda in Soria and Moradillo de Roa in Burgos-, and a third one that changes every year: Olmedillo in 2015, La Aguilera in 2016 and Peñaranda de Duero in 2017.

According to winemaker Jorge Bombín, 2017 was a very challenging year. Beyond the frost that conditioned the vintage, grapes were harvested early so Legaris struggled to have moderate alcohol levels (all the wines reach 15% vol). Furthermore, as grapes ripened faster, the wines naturally tend to be more uniform and differences are less evident. To maintain the wines’ natural freshness, the three villages chosen in 2017 are located in cool, high areas. These were our impressions of these Tempranillo wines which are set to be sold at around €32 in Spain. 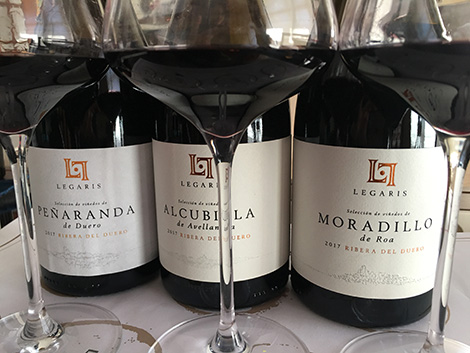 Alcubilla de Avellaneda 2017. Red clay soils with high iron content at an elevation of 930 metres. Spicy forest fruits with aromatic herbs and some cocoa aromas on the background. Less rich and more fluent on the palate with firm, yet approachable tannins. This is really savoury and different.

Moradillo de Roa 2017. Stony, alluvial soils at an elevation of 970 metres on the moorland. Intense dark fruit, liquorice and dried herb aromas and a mineral undertow. More tannic structure here and lots of potential. This Tempranillo will benefit from some cellaring.

My physical resilience was put to test during a marathon Rioja tasting featuring wines from different valleys and landscapes spanning the appellation. The event was curated by Alberto Gil (in the photo below), a journalist and wine columnist for La Rioja newspaper who is the co-author of Rioja: vinos silenciosos, a delightful book featuring the lesser-known wine producers in the appellation. Over the course of three days we tasted blind in the spacious premises of Finca La Emperatriz, the estate owned by the Hernaiz brothers, who generously let us stay in their pretty villas. Getting up early to enjoy a lovely stroll through the vineyards towards the Oja river, where I bumped into a fearful roe deer, is an unusual pleasure for those of us who live in a big city. 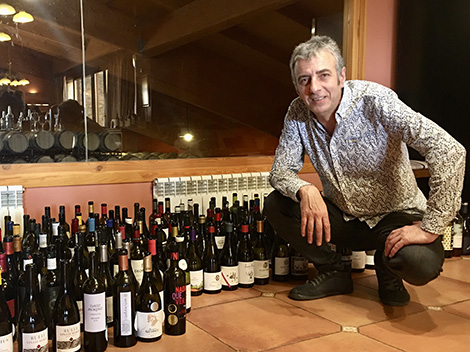 The wines that performed less consistently in this fantastic overview of styles, landscapes and trends were those with excessive ripeness and oak, two features that prevented us from appreciating the grape varieties and terroirs behind. The tasting confirmed Rioja's huge potential to produce diverse, unique and age-worthy whites. And I came to the conclusion that Tempranillo Blanco is better suited to cool, high elevation areas, while Maturana, despite its quality, is of little interest to winegrowers.

Rioja has plenty of room for many different wines. I was delighted to taste some excellent 2020 carbonic maceration reds; this is a category to champion and one in which excellence can be certainly achieved. Garnacha grown in cold, elevated, fresh areas like the Alto Najerilla valley, Tudelilla, Ausejo and Yerga in Rioja Oriental, as well as some isolated vineyards in the Sonsierra, is fantastic. Rioja Oriental becomes fresher and more approachable when the focus shifts from Tempranillo to late ripening varieties: Garnacha, Graciano and Mazuelo. And there is much to explore in bordering elevated areas where climate change is being beneficial like the western end of the appellation or vineyards grown on the slopes of Sierra de la Demanda.

The new single vineyard and village wine designations do not seem to appeal to established, well-known producers but despite their limitations and shortcomings, they may help small and out-of-the-radar growers to get to know their terroirs better and challenge themselves to make better wines.

Best of all, the tasting was an inspiration to explore lesser-known areas and producers and for future articles and recommendations.

Following a meteoric career that has led him to farm 65 hectares of traditional, goblet-trained vineyards in IGP Valdejalón and Alpartir in Sierra de Algairén, Aragonese Master of Wine Fernando Mora spent a couple of days in Madrid presenting new Frontonio vintages and recent releases. 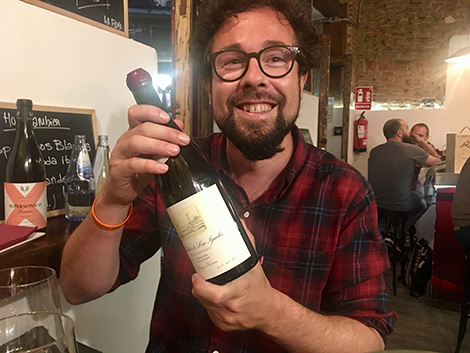 Some wines are no longer made so their grapes are now destined to improve other cuvées. This is the case of Botijo Rojo Viñas Viejas (old vines), whose grapes are now part of the entry-level red Botijo Rojo. Telescópico Blanco is now blended in Microcósmico, Mora’s white village wine. Finally, the now defunct Telescópico Mazuela (Carignan) adds extra complexity and freshness (blueberries, wild berries, floral notes) to the single Telescópico cuvée remaining in the portfolio which, starting in the 2018 vintage, blends Garnacha Tinta, Garnacha Peluda and Mazuela. As opposed to both Garnachas, which are fermented with whole bunches and undergo long vatting periods, Mazuela is fermented without stems to avoid heavy extraction.

I also tasted Supersónico 2019. Grapes sourced from high-altitude Garnacha vineyards are now aged entirely in foudre. A fruit-driven wine with plenty of herbal notes, it was round, savoury and with zesty acidity, which is rare to find in Aragón.
For Mora, "typicity is a temporal concept". The way Frontonio wines are made does not differ much from what locals used to do when destemmers were not around and vatting times were very long. Yet the elders say their wines are 'decaf'! But, as Fernando points out, "the only difference is that our grapes are harvested earlier."

The star 2018 release is Psicodélico. This is a serious, consistent version of the vin de soif sold in the first Frontonio wine club pack launched at the start of the pandemic. The focus is on minority varieties like Cribatinaja, Robal and Provechón blended with Macabeo and Garnacha. White grapes represent 65% of the blend. The wine, which is due to be sold for €30, will not carry the IGP Valdejalón seal.

As for premium 2018 Garnacha reds, we enjoyed the combination of lightness, depth and minerality of Frontonio La Cerqueta and the amazing freshness and spicy, herbal notes (coriander, pink pepper) of El Jardín de las Iguales. This is the second vintage of El Jardín after 2016 as it was not produced in 2017. This is a terrific Garnacha, yet very different from the aerial and super expressive Quiñón de Valmira 2019 which was one of the highlights of the Rioja blind wine tasting a few days earlier. You don’t often have the chance to taste such special wines in such a short period of time.