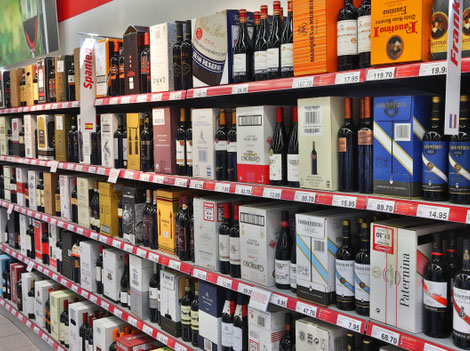 Switzerland represents a strong and growing market for wines from Spain. According to recent figures from the Swiss Customs Administration Swiss-Impex, Spain occupies second place for bottled red wine exports to Switzerland by volume, preceded by Italy and followed by France. In terms of value, Spain follows Italy and France. Red wine is the most popular foreign wine in Switzerland, representing 42% of total imports. Spanish bottled white wines account for just 10%, as also sparkling wine.

Red wine in bottle remains the principal Spanish export: in 2014, 17 million litres were exported to Switzerland, representing about 22% of the country’s red wine import quota. The volume of bottled white wine exported (1.7 million litres in 2014) is still fairly small, but there has been an impressive 24% increase in the last 5 years. Annual exports of sparkling wine are fairly stable at around 2.4 million litres.

The chief thing to note is the rise in quality of Spanish wine exports to Switzerland. Thus, while the volume of wine has decreased somewhat (thanks mainly to a reduction in exports of bulk wine), its value has increased. Figures from the Spanish Ministry of Agriculture show that the decrease can be traced to regions that traditionally exported bulk wine. There are notable increases in exports from up-and-coming regions such as Ribera del Duero, Toro, Catalunya and Rueda, to name but a few.

Maria Escudero, market analyst at the Spanish Embassy in Berne, observes that these figures are an accurate reflection of the purchasing practices of today’s wine-buyers in Switzerland, who are increasingly interested in discovering new wines from quality areas outside the familiar stamping grounds of regions such as Rioja.

Hansjörg Löschmann at Paul Ullrich, a high-end Swiss wine merchant with three stylish shops in Basel and one in Zurich, is one retailer who has noted increasing interest among his customers in wines from Spain. “They’re definitely a theme for us today – in the past, it was all about Italian wines. Nowadays Spain is more and more interesting for our customers – the country is on the wine lover’s map.”

There’s more to life than Rioja

Löschmann rejoices in the dramatic developments in Spanish wines of the past 20 years, and agrees that nowadays “there’s more to life than Rioja!” He salutes the courage and vision of wine makers who are sticking with indigenous varieties (e.g. Garnacha/Garnatxa - both red and white - Mencia, Godello, Verdejo), resurrecting old vineyards and making wines in the traditional style with real local identity.

Ullrich has something for all tastes and all budgets (from a decent Rueda by Ipsum at CHF11.50 to Vega Sicilia at CHF369), sourced from regions throughout the peninsula. Catalunya is well represented with wines from Priorat (René Barbier, Joan Simó), Montsant (Acustic), Terra Alta (Edetaria) and Costers del Segre (Castell del Remei). Raul Pérez’s wines from Bierzo and Galicia get a good showing and there are many fine bottles from Ribera del Duero (Vega Sicilia but also the more affordable Pico Cuadro and Emilio Moro). A series of tasting events are scheduled throughout the year.

Denner, the discount store with branches all over Switzerland and an online store, is a significant player in the wine field. Their shops are often strategically placed next door to a branch of the Migros supermarket, which by its statutes is forbidden to sell alcohol. They are very secretive about what actually sells in their shops, but the selection is certainly eclectic. Thomas Kaderli in the Press Department was prepared to divulge that Spanish wines have always been a central part of their wine offer. They have enjoyed steady popularity with customers in high street stores as well as in the online shop.

Denner customers, he confirms, look not only for value but are also prepared to pay good prices for the better wines. "We offer a wide range from excellent-value entry-level wines to more expensive bottles for connoisseurs. As a discount store, it's important for us to offer wines across the range - the key thing is to offer good value for money at every level."

Coop has an impressive and reliable wine selection, with a wide range from all over the world and a decent showing from Spain. In an email, their press department informed me that Spanish wines in general and red wines in particular are an important part of their offer, making up approximately one-fifth of their total selection. “We offer a wide variety at various price points, from bargain wines (at less than CHF5) to the most expensive Gran Reservas.” Coop customers, they explain, are looking for good value for money, which doesn’t preclude their buying certain bottles at elevated prices, as long as the quality is there. Rioja and Ribera del Duero remain the big sellers, and Priorat is always popular. Cava is increasingly seen as a decent alternative to Champagne - they stock a range from Codorniù and Freixenet, with a little organic cava from Castell d’Age.

Silvia Berger, Coop’s wine buyer, keeps a finger on the pulse by attending wine fairs, visiting Spain, keeping track of new and interesting developments and inviting samples. New lines are announced and described in their wine magazine Spanien (a recent issue covered wines from Bierzo) and they stage their own wine fairs for customers to taste and discover new wines for themselves. Overall, comments Berger, the development of their Spanish offer is extremely positive.