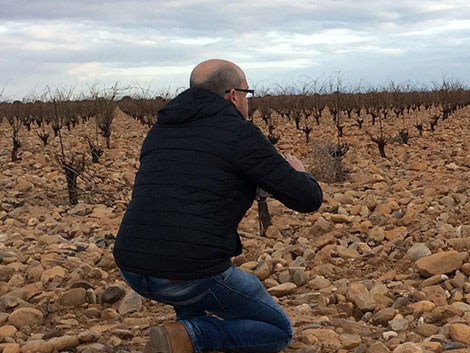 The last photo I have from Xavier Ausàs was taken in Toro earlier this year when we visited some of Vega Sicilia’s vineyards. I enjoyed photographing the winemaker while he was busy taking pictures of the vines. Photo: Amaya Cervera

Born in 1968, Xavier Ausàs came to this world far away from Ribera del Duero, in Figueras (Girona). He moved to Valladolid when he was four after his after took over Flor de Esgueva, a cheese making plant. He spent two years at the Vineyard School in Requena (Valencia) but given that winemaking was not yet taught at university, he moved to Blanquefort (Bordeaux) to study a BTS (Higher National Diploma) and then obtained a Winemaking Diploma in Toulouse.

By 1990 he was doing his internship in “Vega”, as he always refers to the winery and estate. From 1982, the winery had been in the hands of the Álvarez family (read more about the winery's 150-year history). “I started cleaning harvesting boxes”, he recalls. Maybe this is one of the reasons why he always referred to Pablo Álvarez as “don Pablo”, despite the countless number of times he had asked him to drop formality. “I just couldn’t bring myself to do it”,  Ausàs adds. The following year he became winemaker at Alión, Vega Sicilia’s modern winery in Ribera, which was launched with the 1991 vintage.

Vega Sicilia announced yesterday that Gonzalo Iturriaga de Juan would be the new technical director at Tempos Vega Sicilia, the name of the parent company. Iturriaga worked for five years as winemaker at Bodegas Habla in Extremadura and later became export director at Lamothe-Abiet, a company specialised in oenological products.

In the same company statement, Pablo Álvarez praised Xavier Ausàs’ career and described him as a “great winemaker who has bestowed the wines with a well defined personality respecting the identity of the terroir and the styles of each region”.

This is likely to be Ausàs most unusual —and quiet— summer after 24 years of uninterrupted harvests at Vega Sicilia. At this calm time, we have asked him about his departure from Vega Sicilia, what are his best memories from such legendary firm and his plans for the future, about which he keeps mum.

It has escaped no one’s attention that your departure comes a few months after the excessive levels of sediment found in Alión and Pintia.
I’d rather not talk about this issue. In the life of any technician there are trials, successes and mistakes. My departure has been mutually agreed and has not been in the least dramatic. I do not forget that I’ve made a name thanks to Vega Sicilia, which has allowed me to grow personally and professionally; and to whom I have devoted a large part of my life.  I think we are even.

How do you see Vega Sicilia today?
I think it will be hard to engage in investments like those carried out in the last years. Alión and Pintia are doing well, the road for Macán has been laid and Vega Sicilia has never been as successful as today. It is Spain’s greatest icon. To achieve this you need to be a pioneer and a visionary. Vega Sicilia is fully integrated in the 21st century.

Will the new winery and the decision to vinify plots individually mark a big difference in the style of Vega Sicilia?
Plot analysis was started in 1998 and has been completed on the 2010 vintage. Working so many plots separately is complicated but the result is much more accurate. Vega Sicilia is not Burgundy; it is a domaine wine where individual plots form part of the final blend. The project is designed to obtain the maximum expression from each plot —they behave like links in the chain, which is what really matters.

The brand Vega Sicilia always seems to be raise above its owners or winemakers.
The brand is super generous in that it allows you to share its fame; it is indeed above the persons. Lots of people know the brand but are not aware of the winemaker.  One must learn to take fame in his stride.
What is the best contribution of the Álvarez family to Vega Sicilia?
A  complete internal reorganization and projecting the company to the outside world. Not to mention a considerable expansion that makes sense if it is aimed at making complementary wines; not wines that engulf each other.

You started working side by side with Mariano García. What did you learn from him?
That intuition is also important. It was something I lacked because I was a very technical person. It’s hard to explain —it’s that feeling of “I don’t know why but we’re going to do it this way”. At times, it can just be the smell of a tank or a low density level which make you aware that there might be a problem. Actually, I have learnt a lot in Vega Sicilia; even from the most trivial things.

Who is Xavier Ausàs in 2015?
I have been involved in the launch of many great projects so I would like to spend a little bit more time on myself. I have enough experience and capacity to do it. Plus I need challenges; I’ve had plenty of them in my life —the launch of Pintia, the restyling of Valbuena. Not to mention that every time the group launches a new wine it is thoroughly scrutinised.

Do you have any projects in mind?
Yes, I do, and not only in Spain, but I cannot talk about them yet. Opportunities abound for enthusiastic, honest people whose modus vivendi is wine. I have had various offers and proposals throughout my professional career, but I have always been loyal to Vega.  I do not exclude the possibility of making my own wine; it’s one option within the range of possibilities.

Most people are unaware of your ample experience with white wines.
The level in Vega is very high so there is a need to keep under check all the wines that are launched onto the market. This is the reason why none of the white trials we carried out saw the light. There have been some trials in Rioja with the 2013 and 2014 vintages. Whites require careful handling;  precision and skill need to be applied at the right time.

And the most difficult?
1993 was extremely challenging,  more so than 1997; only Valbuena was made that year. In 2002, we scraped by thanks to our technical skills, both in the vineyard and in the winery. Advanced winemaking techniques mark the difference nowadays, meaning that quality is still achieved in bad vintages. 2003 was an atypical year because of the extreme heat.

How do you see the evolution of Spanish wine in the last couple of decades?
The way things work in Spain is just like our character: by impulse. Concentration used to the byword but now we’ve moved onto lighter-bodied wines. Making good wines has already been achieve, I think each region should focus on defining its identity; it would also help to preserve the enormous diversity found across Spain.

After this change in your life, which wine would you take to a desert island?
Vega Sicilia Único 1998.

If you could ask for three wishes…
One is enough: good grapes. Other things can be kept under control or solvable.