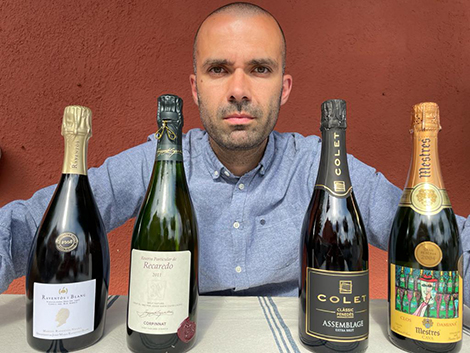 Álvaro Ribalta with bottles of the four sparkling wine labelling options that can be found currently in Penedès.

Anyone reading this article hoping to find a solution to the current situation of the sparkling wine production in Penedès, please stop reading now. The complexities that have arisen as a result of years of frictions between some producers and the Consejo Regulador of DO Cava cannot easily be unlocked, not least in fewer than 10,000 words – the word limit for a Master of Wine Research Paper.

For those new to the topic, there are currently four labelling options for traditional method sparkling wines in Penedès: Cava, Clàssic Penedès, Corpinnat and Conca del Riu Anoia (plus Can Ràfols dels Caus, who left the DO and remains independent. This fragmentation is a result of 29 producers choosing to label their wines outside of DO Cava’s regulations.

The slow but steady stream of wineries leaving the appellation started in 2002, when Mas Comtal begun labelling their sparkling wines under DO Penedès, followed by others such as Colet or Mas Bertran.

But in 2012 the media turned its attention on the region after Raventós i Blanc, direct descendants of the first Cava maker in history and founder of Codorníu, chose to label their wines outside of the appellation’s rules and created their own designation: Conca del Riu Anoia.

Some years later, in 2019, the nine producers that formed the private association Corpinnat also left DO Cava. Despite only accounting for a mere 1.5% of the total production of Cava, those 29 wineries include some of the most prestigious names in the region, including Recaredo, Gramona, Colet or Raventós i Blanc. The spotlight was back in Penedès.

In the summer of 2020, the DO Cava reacted and approved a raft of measures to address the concerns that many wineries had cited as the reason for their departure from the appellation.

The aim of this paper was chiefly to understand the motivations that led those producers to label their wines outside DO Cava, to identify the advantages and disadvantages of being outside of the appellation, and to do a comparative analysis between all four labelling options. Interviews were then arranged with all those 29 producers, eight Cava houses (including the three largest in volume) as well as other relevant associations and experts.

Reasons for leaving DO Cava

Somewhat predictably, the most frequently mentioned reasons for producers to leave DO Cava (or to label their wines outside of it) were twofold:

1.- The desire to identify the origin on the labels of their wines was mentioned by 22 producers as a primary motivation.

Since the creation of the DO in 1986, Cava wines are made in several autonomous communities (Catalunya, Aragón, Basque Country, La Rioja, Navarra, Extremadura and Comunidad Valenciana). However, producers were not allowed to mention the origin of their wines on the labels.

2.- The reputation of the Cava brand as a low-price wine was stated by 13 interviewees as a primary motivation.

The average retail price of a bottle of Cava is €3.96 but finding bottles under €2 is not uncommon. The producers that gave this reason felt the image of low prices associated to the Cava brand was harmful to their own brand.

As expected, being allowed to mention the origin of the wines was identified as an advantage of being outside of DO Cava. Interestingly, Clàssic Penedès is the only designation that can mention the word Penedès on its labels. Both Corpinnat and Conca del Riu Anoia set their own boundaries based on different surveys and each have different demarcations. The paradox that resulted from this research is that, given the limited volumes and premium nature of most of these producers, the channels through which their wines are sold (high end on- and off-trade), seldom require specific origins to be stated on the labels. Instead, producers can rely on the very gatekeepers who recommend/sell their wines to explain their origins in detail.

Consequently, it can be argued that the channels not guarded by such figures would benefit the most from being able to communicate the origin through their labels.

Stricter production requirements of the options outside of DO Cava was also stated as an advantage. Organic and biodynamic credentials are indisputably at the forefront of such claim, not least the positive impact they can have on the environment but also commercially. However, producers who focus on producing basic Cava (nine-month lees ageing) must also be aware that switching to a stricter option (15 or 18 months minimum) will inevitably require a large investment in extra stock held at the winery prior to release.

Being part of a smaller group of like-minded producers was also highlighted as an advantage. Indeed, the profile of producer outside of DO Cava differs greatly from the 71 companies who only buy base wine and which account for 37% of Cava’s production. Likewise, Reserva and Gran Reserva Cava and organic Cava only account for 12.3% and 5.5% of Cava’s total production, compared with 100% of the producers outside of it.

Despite no advantages being reported by the Consejo Regulador or other Cava producers, the great majority of interviewees declared that the exodus of producers from DO Cava was a clear catalyst for the improvement plans to be considered and approved after years of lobbying by the very producers that left the appellation.

By far, the most mentioned disadvantage by those producers that left DO Cava was the unawareness of their new “brand” amongst standard consumers. Despite the perceived poor image of the Cava brand in some markets, it remains one of the most recognisable Spanish wine brands and arguably the third most famous sparkling wine in the world after Champagne and Prosecco. Achieving this global recognition is not an easy task and requires years of promotion and brand development. As such, producers choosing to label their wines outside of DO Cava must be aware of the commercial risks involved.

Additionally, other disadvantages mentioned were the impossibility to apply for Scandinavian tenders or EU subsidies.

For those producers that remain in DO Cava and for the Consejo Regulador, the exodus of high-profile producers (despite accounting for less than 1% of the total production) was seen as damaging to the overall image of the appellation. It must be noted that  the region’s prestige was largely built thanks to bodegas such as Recaredo, Gramona and Raventós i Blanc.

After reviewing the reasons why most producers left DO Cava, such motivations were used to critically analyse each labelling option.

Regarding identification of origin, Cava has now four main areas and seven subregions to allow producers to state the origin of their grapes. This new zoning classification carries an implicit risk given the current political situation in Spain: Catalan wineries adopting this classification and using Catalan names for all their subdivisions could further jeopardise sales in the rest of the country. However, the use of the word “Barcelona” in the labels offers a welcome reference point (and a positive global image) to those inexperienced consumers who are not familiar with complex regional subdivisions.

Furthermore, DO Penedès has 10 different subregions approved by its Consejo Regulador with complex boundaries, to which the different demarcations of Corpinnat and Conca del Riu Anoia must be added. Additionally, there are three areas that use the word Anoia on the label (Valls d’Anoia-Foix, Costers de l’Anoia and Conca del Riu Anoia), all with their own different boundaries, adding confusion to the current offering.

As far as prestige of the brand is concerned, numerous respondents alluded to the poor image of Cava in certain export markets. After most of the highest profile producers left DO Cava, some interviewees expressed concern at the prospect of its image being rebuilt. However, there was consensus amongst most respondents that, although Cava´s improvement plans came too late, they were well drafted. This, coupled with a strong marketing budget and the will to improve its image, could help the Consejo Regulador to achieve such endeavour.

Clàssic Penedès’ unknown nature in the trade was seen as negative, perhaps explained by being a relatively small initiative without enough marketing force to promote itself in certain channels. The opposite could be said about Corpinnat and Conca del Riu Anoia – the prestige tag attached to their producers has brought positive attention from trade and media.

In regard to production requirements, Cava’s clear hierarchy (not found in the other labelling options) plays in its favour, as it enables consumers to trade up. Clàssic Penedès’ flexibility regarding the use of méthode ancestrale, was identified as a strength: it is a category growing in popularity and a “fantastic style to attract new consumers from other beverages to the category”. However, the laxity of other requirements such as the broad palette of permitted varieties was seen as negative. Interestingly, Conca del Riu Anoia’s strictest requirements of all labelling options was not seen as a positive, for it promotes a sense of alienation preventing other producers from joining.

Cava’s new “Productor Integral” emblem is undoubtedly useful for those producers who vinify all their production, enabling them to differentiate themselves from those wineries who either buy base wine or finished en punta bottles. This can be particularly effective in channels where such differentiation makes more sense, such as in restaurant wine lists (Is it time for local wine lists to be sorted by type of operation as opposed to by appellation after the current fragmentation?). However, drawing on the Champagne analogy, growers who made their name as récoltant-manipulant have not seemingly lost any market share after becoming négociant-manipulant forced to buy fruit to meet demand. This could suggest that a producer brand is more important than such distinction.

There is a clear profile difference between the producers outside DO Cava and the volume leaders inside the appellation. These differences, coupled with the delay in the implementation of Cava’s improvement plans, triggered changes in the sparkling wine structure in Penedès.

Cava is the only option available to larger wineries who do not follow organic viticultural methods, harvest most of their fruit by machine and buy base wine and/or finished product.

Those producers who follow organic or biodynamic grape growing philosophies, focus on Reserva wines and above and prefer to be part of a smaller group of individuals could choose to join any of the other three initiatives (providing other criteria are met).

The current fragmentation is undoubtedly confusing for the standard consumer and a degree of consolidation might be welcome in the future. Cava’s new plans seem to have addressed the shortcomings in the appellation and, whilst they might prevent further departures, it is unlikely that they will help bring back those producers who have already left. A merge between Clàssic Penedès and Corpinnat and the formation of a new DO in the region was the best prospect for such consolidation, however, ethos differences between producers have hitherto prevented it. Is it perhaps time for the upcoming generations, more travelled and open minded, to take the reins of the negotiations and bring clarity to the current offering?

The research paper can be downloaded here.

What’s all the fuss about Cava?
“As long as there is a surplus of grapes, it will be difficult to lift the image of Cava”
Cava finally linked to terroir with 12 new 'grand cru’ sites
Cava de Paraje Calificado - what’s it all about?
Corpinnat opens the way to private designations in Spain
Corpinnat leaves DO Cava. What comes next?