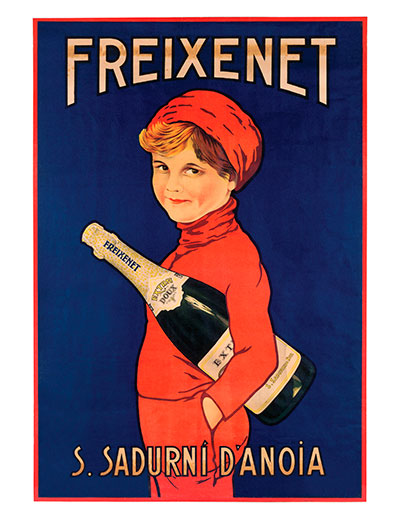 Freixenet is one of the largest sparkling wine producers in the world and the biggest player for Cava producing more than 114 million bottles. Founded by Pere Ferrer and Dolores Sala in the early 20th century, their initial philosophy was based on hard work and ambition focusing on innovation in winemaking, commerce, communication and foreign markets. The group retained a family-own status until 2018 when German sparkling wine company Henkell became the major stakeholder.

The first bottle bearing the name of the company was released in 1914. Freixenet was the coloquial name given to the Freixeneda family estate as well as Pere Ferrer’s nickname. Pere’s commercial genius and Dolores’ sensitivity worked so well that the brand became Spain’s second largest cava house in just 22 years. They also built a winery in Sant Sadurní d’Anoia’s Barrio de la Estación, where it still has its headquarters.

After the Spanish Civil War hiatus, the company returned to growth with the arrival of youngest son, José Ferrer Sala. Under his tenure, facilities were revamped and he set up a sales network and launched advertising campaigns. Current President José Luis Bonet did likewise in the sixties. He relaunched Carta Nevada with a brilliant advertising campaign supported by a powerful distribution structure and commercials introducing the slogan “Burbuja Freixenet” (Freixenet bubbles) that were a huge success for the brand, specially in Spain.

Investment in technology turned Freixenet into the first producer worldwide to ferment its base wines under controlled temperatures. As a result, Cordón Negro was launched in 1974. It combined a sophisticated packaging with affordable prices and offered three different types of dosage: Brut, Dry and Medium-Dry.

Aside from bestsellers Carta Nevada (€5.5 in Spain), Parellada-based Cordón Negro (€6) and Brut Barroco -a Macabeo-Xarel.lo-Parellada blend with 24 months aging (€9.5)-, Freixenet has considerably expanded its Cuvée Prestige range. Its most original wines are focused on native varieties: Malvasia, a dessert cava made with the eponymous grape aged for 20 years to use as dosage (€10); Monastrell Xarel.lo, which blends local white and red grapes (15,000 bottles, €9) and the blanc de noirs Trepat (about €10), made with grapes from Conca de Barberà (Tarragona) where this variety thrives.

The Elyssia range includes international grapes such as Pinot Noir for the rosé (€10) and Chardonnay and Pinot Noir alongside local grapes for the Grand Cuvée (€12). Other labels include Cuvée DS (150,000 bottles, €15), a Gran Reserva blend of Macabeo, Xarel.lo and Parellada that pays tribute to founder Dolores Sala and is only made on the best vintages and Top Real Reserva (€24), aged for 30 years and blended with Reserva wines.

Finally, Casa Sala (20,000 bottles, €30) is a dosage-free blend of Xarel.lo and Parellada made in the original Freixeneda estate which has been transformed into a boutique winery and operates separately. As such, it is a company in its own right and meets the standards of the Cava de Paraje Category, including the requirement to produce 85% of their base wines.

The Sant Sadurní d’Anoia cellars offer many activities for visitors, who can choose between the standard tour, the kids tour (where they taste musts before fermentation), the schools tour or à la carte visits for those willing to delve further into the world of Cava. There is even a visitor train that drivers through the cellars, which is a tourist attraction in itself. You can also visit the 13th century farmhouse La Freixeneda in Mediona that was restored in 2014 to commemorate the centenary of the company and from whose vineyards comes Freixeneda, a 70% Cabernet Sauvignon and 30% Grenache red in the style of Italian Amarone.

Recently the group has launched Tannic by Freixenet in Barcelona, a gastrobar and shop where the whole range of Freixenet wines and cavas can be tasted and bought. The aim is to expand the concept worldwide.

At present, there are 21 wineries in the Freixenet group spread across Europe, America and Oceania. These include Henri Abelé, a historic Champagne maison, Gloria Ferrer in California or Wingara in Australia. In Spain the list includes wineries in Rioja (Solar Viejo), Ribera del Duero and Rueda (Valdubón), Priorat (Viticultors del Priorat / Morlanda), Montsant (Fra Guerau) and Rías Baixas (Vionta).

Our top cavas and sparkling wines for Christmas
Cava finally linked to terroir with 12 new 'grand cru’ sites
Cava de Paraje Calificado - what’s it all about?