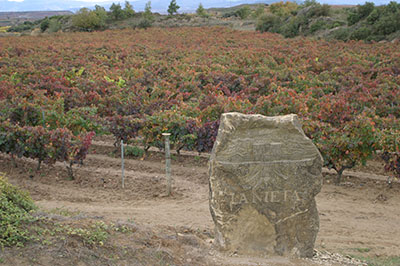 The Eguren family set up this winery in 1998, right in the midst of modernisation in Rioja. It is located in Laguardia, beneath the protective barrier of the eastern end of Sierra Cantabria and within the boundaries of the Basque province of Alava, thus making it part of Rioja Alavesa. One of the most distinct features of Viñedos de Páganos are its underground cellars. Excavated in the rock, they provide optimum conditions for wine aging.

Despite its small production (about 60,000 bottles), which comes from two vineyards, the winery serves as the logistic centre for the whole Eguren group.

El Puntido, which dates from 1975, occupies 25 hectares of trellised Tempranillo vineyards on a gentle south-facing slope. With its 1.75 hectares, La Nieta is much smaller and its shallow soils are planted with vines of the same variety. They produce a wine of the same name, arguably the most Burgundian and elegant of the Eguren family in Rioja. As with other premium wines, destemming is done manually, grain by grain. After five days of pre-fermentative cold maceration, the wine ferments in small 10-hectolitre oak casks, with traditional foot treading. Malolactic fermentation and aging are both carried out in French oak barrels. La Nieta retails in the Spanish market at €80, whereas El Puntido costs around €34.

Somewhat surprising was the launch of a 2005 Gran Reserva under the El Puntido brand (about €40) given the family's past aversion towards traditional aging terms. It was the case at least with their more modern wines, but it evidences the resurgence of this category in Rioja. Do not expect a customary Gran Reserva. It follows the Eguren style, aged under 30 months in new French oak barrels, and shows vigour and weight on the palate.

Rioja in the 21st century: styles and categories of wine