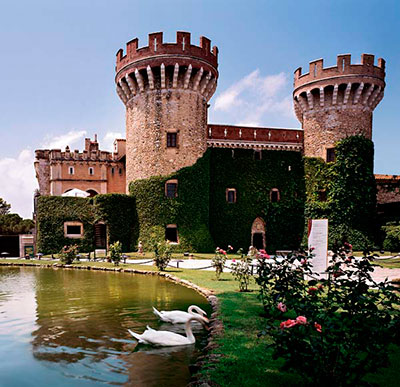 Perelada represents a key point of reference for wine in the Empordà region, and today is an important group that is currently in the process of expanding. Miguel Mateu bought the complex of buildings at Peralada castle in 1923, including a magnificent monastery where the Carmelite monks had produced wine for centuries. The Gran Claustro cava, which even today continues to age in the convent’s cellars, was the first wine to make the winery famous, being served during American president Dwight Eisenhower’s visit to Spain, as well as featuring in royal weddings such as that of Baudouin and Fabiola of Belgium.

In the 1970s, Arturo Suqué – Miguel Mateu’s son-in-law and successor at the helm of the family businesses – began to produce a sparkling white (the Blanc Pescador) with winemaker Enric Serra, which increased the volume of the wine business. However, the era of quality wine began with Javier Suqué, grandson of the founder, who was committed to planting vines and producing a range of wines primarily based on foreign varieties (Cabernet, Merlot and Syrah), while more weight has been given to the indigenous varieties Cariñena and Garnacha in recent years.

The winery currently owns five properties (Garriga, Espolla, Garbet, Pont de Molins, Malaveïna), located in various areas of the Empordà region, which benefit from the varied soil types and locations, enabling them to have both mountain vineyards as well as other, more Mediterranean ones.

The exceptionally wide variety of wines includes Aromas Primarios, a range of young wines, and Jardins, a collection of single variety wines, as well as Cigonyes, a new range that focuses on local grapes. The 3 Fincas (€5) or 5 Fincas (€9.50) reds, which blend local and foreign varieties, stand out for their excellent quality-price ratio and combine the winery’s own grapes with grapes from third parties.

Above this price point, everything is produced from the winery’s own vineyards, and in many cases the wines are named after the property they come from, except in the case of the very intense Gran Claustro (€29.50), a blend of Garnacha (50%) with Cabernet Sauvignon and Merlot where the combination of different soils and varieties seeks maximum complexity and longevity. With 30% Monastrell, Finca Espolla (€15.45) is one of the winery’s most distinctive reds. Finca Malaveïna (€19.50), which has a higher presence of foreign varieties, is a great example of a spiced, balsamic and Mediterranean wine, reminiscent of French wines from Roussillon. Today, there are two reds that originate from the enthralling vineyard of Garbet, with slate soils and terraces that look out over the sea in Cap de Creus (the first attempt to recover the wine-making tradition of terraced vineyards, which had been completely abandoned on these Costa Brava hillsides): the firm and very mineral Finca Garbet (€110) made with Syrah and Cabernet, and the new Aires de Garbet (€38), a hugely evocative, juicy and expressive Garnacha.

From La Garriga come a single-variety Cariñena (€15.45) and a Chardonnay and Cariñena white (€16.50). This is the oldest property and is also home to the experimental vineyard used to make the sometimes extravagant, but always interesting, Ex Ex (for ‘exceptional experiences’), which is released every year.

The group has been present in Priorat for some time with its own project, Casa Gran de Siurana, and a project shared 50:50 with the Pérez family (Martinet Viticultors) in Cims de Porrera. In Ronda, Málaga, they are working on a wine-making/property project, La Melonera, which already has wines on the market. Perelada has recently taken over Bodegas Fin de Siglo in Rioja and is getting ready to expand to other key regions such as Rueda, Ribera del Duero and Rías Baixas.

Make the visit to Perelada unforgettable by taking in the entire compound created around the castle: the casino, the convent with its gothic cloister and the museums that hold the private collections of the Mateu-Suqué family, in addition to the hotel, golf and spa complex. In summer, the castle gardens host the famous Peralada Festival, with numerous music and dance performances.

Our favourite wines in 2014
Garnacha, can a grape be sexy?