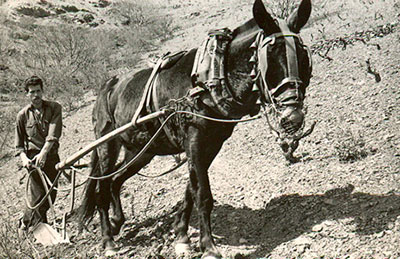 This is the region’s great historical winery, linked to the arrival of Carthusian monks in Priorat in the 11th century, who were responsible for spreading the cultivation of grapevines. In the 1830s, with the Ecclesiastical Confiscations of Mendizábal —which resulted in the expropriation and privatisation of monastic properties in Spain— the convent was raided and partially destroyed, although some years later five families acquired the properties and set up the Societat Agricola l’Unió agricultural society. That is where they bottled the first Priorat wine in 1878, which was presented at the Paris World Fair. The company was re-founded in 1974, once again resulting in the first wines bottled in the region, this time in the modern age. The Raventós Codorníu group became a shareholder in the mid-2000s, assuming control of the winery.

The Scala Dei wines from the 1970s helped to develop a second revolution in Priorat in the 2000s as the region incorporated production techniques such as fermentation with stems or ageing in large foudres instead of the smaller 225-litre Bordeaux barrels. Winemaker Ricard Rofes has created a line of Garnachas that largely follow this style and come from different soils and elevations. After several trials, the best performing wines were those sourced from vineyards at higher elevations on soils other than schist where, according to Rofes, phenolic and stem ripening occur simultaneously.

Sant Antoni (€79) is a beautiful amphitheater-shaped vineyard located at 600 metres where red and yellow clay magically melt on the ground. Harvest is usually done in three phases factoring in the different exposures and the fact that yellow clay absorbs less heat and grapes take longer to ripen. Mas Deu (€85) is the most stunning, both as a landscape as a wine. The vineyard climbs from a red-clay area at 690 metres to 800 metres at its highest point where the soil becomes chalky. The wine is full of energy, yet it retains the finesse of non-schist soils. Since the 2014 vintage, fermentation and ageing are done exclusively in cement tanks resulting in pure, lovely-defined fruit.

Scala Dei owns 60 hectares of vineyards, mainly planted with Garnacha and Cariñena varieties. They are spread over 42 different plots at 400 to 800 metres above sea level, climbing up the slopes of the Montsant mountain. Its classic line of wines has also been renewed. The wines come now in Burgundy-shaped bottles and part of them undergo whole bunch fermentation (15% to 20%). Wines feel fresher and fruitier than in the past with hardly a trace of oak in them. The young, entry-level red Scala Dei Negre (around €11.5) is now 100% Garnacha, while Prior (€23) only includes 15% Cabernet Sauvignon and 15% Syrah in the blend.

Cartoixa (€38) no longer includes international grapes and is now a blend of 80% Garnacha and 20% Cariñena. Some 60% of the grapes are sourced from schist soils and the rest comes from a mix of clay and limestone soils. The 2016 vintage has recovered the ancient label design of the 1970s which has also inspired the new Heretge (“heretic”, €50), Scala Dei’s first foray into the single-varietal Cariñena category and a wine that needs additional cellaring time.

The winery is open to visitors all year round and bespoke tours are available. The Carthusian monastery, also open to the public, was owned by Cellers de Scala Dei until 1991, when it passed onto the hands of the autonomous government of Catalonia.

The wines can be bought at the group's online store.

Priorat: is it all about terroir?
Our red -and white- picks from Priorat
Ten fun Spanish reds that won’t break the bank
Alimentaria 2016: a four-day chronicle
Grenache soils in Spain
The increasing diversity of reds in Priorat
Garnacha, can a grape be sexy?
A guide to Priorat’s new vineyard classification
#WeStayAtHome: Spanish wine lovers get through the lockdown
Scala Dei recovers the heritage of Priorat's monks