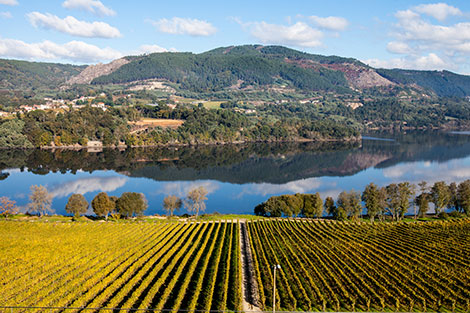 One of the newest in the appellation, this winery produced two wines from the 2013 harvest, with a total of around 50,000 bottles. This family project was started by the children of an emigrant, Ramón, who acquired land in the Castrelo do Miño area upon his return to Spain. There are seven hectares planted along the typical hillsides above the Miño valley, although the family also buy from other vine growers. The winery rises up between the vines, offering an amazing view of the valley.

They produce two whites under the Ramón do Casar brand: a blend of Treixadura, Albariño and Godello (€12.45) and a single variety Treixadura (€14.50). The labels are especially eye-catching, made using photos from the 1950s taken by Alberto Martí in A Coruña harbour. One shows a farewell to emigrating Galicians; another, the social classes in Galicia in that era. Behind them are two letters: one from Ramón the emigrant announcing he has arrived in Venezuela safely; the other from his wife back in Galicia.

Two single-varietal Treixadura wines were later added to the range. Nobre (around €19 in Spain) is aged briefly in oak whereas Lento (€42, lento means slow) is a late harvest white, a novel approach to Ribeiro’s flagship grape variety.

The wines have a clean style, with plenty of prominent fruit and have been produced very meticulously.