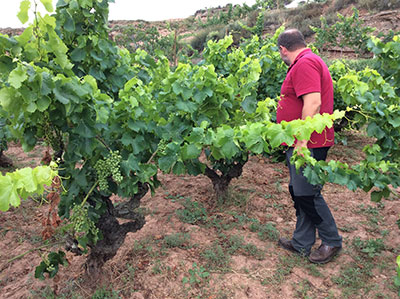 Given his experience teaching Oenology at the University of La Rioja and his work with professor Fernando Martínez de Toda to recover minority grape varieties in the appellation, it is no surprise that Juan Carlos Sancha’s personal venture is based on the results of his research. He had previously experimented with single varietal wines from these rescued grapes during his time as winemaker for Viña Ijalba. At present he combines the management of Ad Libitum (the name in Latin means freely or with pleasure) with teaching and consulting.

But as interesting as the grapes he works with is the area where he grows them. Located in the Alto Najerilla valley, close to Sierra de la Demanda mountain range, Baños del Río Tobía is one of the coldest spots in Rioja. Here Sancha grows organic red and white Maturana, white Tempranillo and Monastel, a real rarity from which he makes what he says is the only wine in the world made exclusively with this variety (around €10). He has also recovered ancient Garnacha plots, some of them planted by his grandfather in 1917 at 750m above sea level in an area called Peña El Gato (literally The Cat’s Rock). The name apparently comes from the fact that the area was so remote that not even cats dared to go there.

Garnacha used to be blended with white grapes in this area to produce a rosé wine called “Clarete”, but the effects of climate change mean that it can now be bottled as a single varietal putting the spotlight on a corner of Rioja with a unique character capable of producing plenty of pleasure. Altogether Sancha makes seven different Garnacha wines from seven different plots, one of them sulfite-free. The latter plus Peña El Gato Garnacha Viñas Centenarias (around 3,000 bottles, €13.5) come from his own vineyards while the rest are made from plots owned by local winegrowers. All of them are bottled separately –the packaging includes the name of each grower written on a tag hanging form the bottleneck. In all cases production doesn’t reach 1,000 bottles.

Garnacha and Ad Libitum Maturana Tinta (17,500 bottles, €10) are fermented in 500-litre oak barrels which are periodically rotated by hand to encourage must and skin contact; aging continues in the same barrels for about a year. The rest of the range includes Ad Libitum Tempranillo Blanco (6,000 bottles, €9.5), a mutation of red Tempranillo discovered a few years ago in a Rioja vineyard. It is made like a young white with fermentation taking place in stainless steel tanks whereas Ad Libitum Maturana Blanca (€11.5, around 2,500 bottles) is fermented in oak for three months.

There are two new wines, a red and a white, set to be released in 2019 under the new category of Viñedo Singular. Grapes for both of them are sourced from Cerro La Isa, a hundred-year old vineyard that has been looked after by five generations of growers. Vines are on a steep hill with a 35% gradient and cover 1.35 hectares on clay-limestone soils with high ferrous content. Red Garnacha is the dominant grape variety but there is also an interesting mix of white grapes: Viura. Malvasía, Garnacha Blanca, Turruntés and Calagraño. Only one barrel of each wine (660 bottles) is made. The white wine is fascinating and shows great depth; the red is an extreme expression of high altitude Garnacha that toys with herbal and green notes. Both wines are expected to cost around €40.