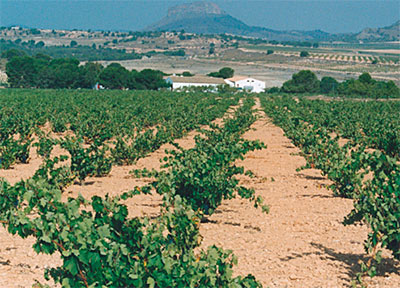 Although officially founded in 1991, Casa Castillo lies on the grounds of an old farming estate which incorporated a winery built by the French in 1870. The Vicente family has successfully managed to get the best out of the vines, all of them exposed to extreme heat in non-irrigated land.

Located on the slopes of Sierra del Molar at an elevation of up to 760 metres, the property occupies 405 hectares, 170 of which are under vine. The rest is planted with almond and olive trees, which grow among pine trees and scrubland.

The past years have seen changes under the leadership of José María Vicente. Tempranillo and Cabernet plantings, valued for their quality and considered indispensable in the 1990s, have been removed to give way to late ripening Mediterranean varieties, which can be harvested in September and October. Their focus is to make silkier and fresher wines.

Monastrell represents 80% of the vines, followed by Garnacha (12%), which has no tradition in the area but has adapted well to Casa Castillo’s climate and soils, and Syrah (8%). Soils are limestone and/or sand and gravelly at higher altitudes. New plantings favour higher density plantings with around 3,000 vines per hectare compared to 1,600 in traditional vineyards, yet total yields remain more or less the same; the aim now is to achieve lower yields per vine.
Except for the basic Casa Castillo Monastrell, the wines are fermented in epoxy-coated stone tanks with variable amounts of whole bunches depending on vintage variations. Ageing takes place in 500-litre casks and foudres which can be kept up to a sixth use or even longer.

The portfolio starts with Casa Castillo Monastrell (around €7-8), a single-varietal with grapes sourced from the valley in the property and aged for eight to nine months. Since the 2015 vintage, the oldest vines (+30 years old) in this area are destined to the new Casa Castillo Vino de Finca (€12), whose production is expected to rise gradually in the future. There are two more single-varietal reds: El Molar (around €14, 40,000 bottles) is a fragrant, smooth Garnacha, whereas the powerful Valtosca Syrah (€18, 30,000 bottles) displays jam and black fruit notes and considerable structure.

Casa Castillo single-vineyard reds stand out not only for their quality but are also among the greatest terroir-based wines in Spain. Las Gravas (€23, around 35,000 bottles) comes from a high-altitude north-facing slope with gravel soils. The blend has notably changed since it was first released in the 1998 vintage. International grape varieties (Cabernet Sauvignon first and Syrah more recently) have been abandoned in favour of Monastrell and some Garnacha. Expressive balsamic aromas (garrigue) dominate with an underlying warm rustic texture but an irresistible mineral expression. In 2015, grapes from the highest part of Las Gravas were fermented separately to make Nemesio, a tribute to the owner’s father which will only be produced in outstanding vintages.
Finally, Casa Castillo Pie Franco (€47, 5,500 to 6,500 bottles) is a deliciously peculiar Monastrell, planted in 1942 with ungrafted vines on a south-facing slope. It is a firm, deep red with lovely texture and fine tannins that is likely to benefit from additional time in bottle to fully develop.