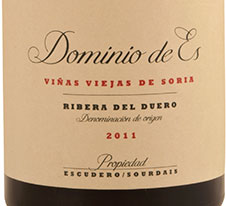 During the 2000s, Frenchman Bertrand Sourdais was technical director at Dominio de Atauta, the winery that discovered the remote and extraordinary landscape filled with very old vines that laid hidden in the east end of Ribera del Duero, within the province of Soria. He has now embarked on two projects within this region.

His most personal endeavour is Dominio de Es, where he has been working as a vigneron producing small yields. He works 25 plots occupying just 3.5 hectares in the village of Atauta. All of them are rented for 15 years with the exception of La Diva and La Mata, the source of his two scarce and expensive single-vineyard reds. All of his wines blend some Albillo with Tempranillo. While the two single-vineyard reds are fully destemmed, the Dominio de Es cuvée includes some whole bunches.

Grapes for La Diva (less than 500 bottles, €425 and €590 per bottle) are sourced from a small plot at the end of a narrow valley that is protected by a knoll near the ancient bodega district of Atauta. The soil is pure sand on a limestone subsoil. In contrast, La Mata (around €390, 600 bottles) has a subsoil of pure chocolate-coloured clay that can be moulded as if it were plasticine. It is a seven-hectare site with 13 different soils and 14 owners. Sourdais works a vineyard that was considered old in 1904. Protected by a small hill, it is the first to be shaded from the afternoon sun.

Bertrand Sourdais: the French winemaker who fell in love with Soria