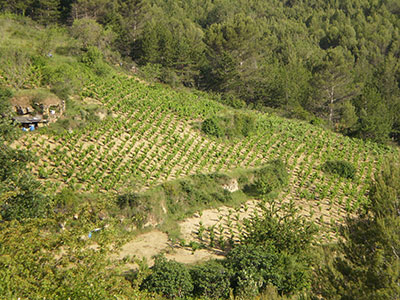 This project was launched by Artadi, the legendary Rioja winery which settled in the area in 1996. Carlos López de Lacalle explains in this video that it initially started as a request by a US friend who wanted to sell a good Spanish Garnacha in his country.

At the time of Artazu's birth, international varieties and Tempranillo were the grapes of choice to produce quality reds in Navarra whereas Garnacha was reserved for rosés. Thus, up to not long ago, Artazu was virtually the only producer in Navarra to make high quality red Garnacha wines. The vineyards are located around the village of Artazu, in the Valdizarbe subzone, one of the northernmost parts of the Denomination of Origin and notably influenced by the Atlantic. Some of them are pre-phylloxera gems and are used to make the winery's top end wine, Santa Cruz de Artazu (€27 in Spain).

Artadi's idea of Garnacha has a cool northern character, with red fruit notes, mineral nuances from the soil and age of the vines, as well as nerve and freshness. Fruit an terroir are the main elements helped by the use of 500-litre casks.

The portfolio includes a red and a Garnacha rosé (€9.5) and a white Garnacha (€9,5) under the Garnacha by Artazu brand which was first released in the 2014 vintage. The idea is to go a step further --the renewed Artazuri range has turned into single vineyard wines.

Red wine Pasos de San Martín (€17) has been produced since the 2011 vintage after the purchase of a 12-hectare plot (35-year old bush vines grown on a single slope) in San Martín de Unx, a village sought after for its Garnachas and located on the eastern subzone of Baja Montaña.

Other wineries in the group are Artadi and El Sequé.

10 great-value reds to celebrate Grenache day
Grenache soils in Spain
Garnacha, can a grape be sexy?
Spanish wines break through the glass ceiling
The renaissance of Garnacha Blanca in Spain