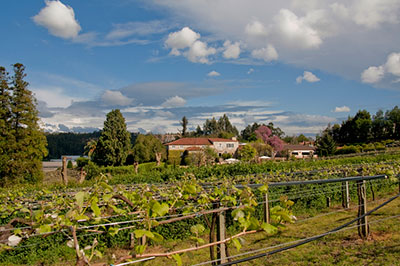 Pazo Señoráns stands out among the leading quality brands in Rías Baixas. Located in Val do Salnés, where Albariño inequivocally dominates the vineyards, the winery pioneered ageing on lees in stainless steel deposits in order to improve the complexity and longevity of white wines.

Owner Marisol Bueno is one of the area's main campaigners. She has led the way both with her wines and her work as president of the Denomination of Origin Rías Baixas between 1986 and 2007.

The estate that she and her husband Javier Mareque bought in 1979 includes a 14th century pazo (manor house) which has been lovingly restored and 12 hectares of vineyards, many of them trained on the traditional pergola system. They own a further six hectares and buy in grapes from local growers. Given the fragmented small holdings which are so common in Galicia and the modest size of the plots, the winery has to rely on over 150 providers to reach an annual output of around 325,000 bottles.

Pazo Señorans Albariño (€12.5 in Spain, around 300,000 bottles), produced since 1989, is one of the more consistent and reliable references in the Denomination. It shows a restrained nose and elegant, complex fennel and stone fruit notes, and is usually at its best a year after the harvest date.

The 1995 vintage saw the birth of the winery's second white wine, showing Albariño's ability to withstand the pass of time. Pazo Señorans Selección de Añada (€32, around 15,000 bottles) comes from Los Bancales (the terraces, in English), one the most singular vineyards in the estate with pure granite soils and minimal organic matter. It is aged on its lees in stainless steel deposits for 30 or more months where it achieves a level of structure, complexity and finesse that make it one of the best white wines in Spain. Every Spanish wine aficionado should try this reference at least once.

At a later stage they launched Colección (€17), which is the standard Señoráns aged for 30 months in bottle; a wine which proves that Albariño’s aging ability is not limited to specific batches of very high-quality grapes. The latest release from Pazo Señoráns, Tras los Muros (behind the wall, €47, 3,000 bottles) is the brainchild of Berta García, Marisol Bueno's daughter-in-law who is married to her son Javier. Following her training with legendary French producers in Bordeaux (Haut-Brion) and Burgundy (Louis Latour), she decided to make a single-vineyard Albariño aged in barrel; it has the required structure and acidity to age beautifully.

Travellers to Galicia are encouraged to pay a visit to the pazo and enjoy the beautiful scenery, well-tended gardens and pergola vines. The winery also produces two eaux de vie in its own pot stills which add an attractive note to the visit. Weddings and other events are also held at Pazo Señoráns.