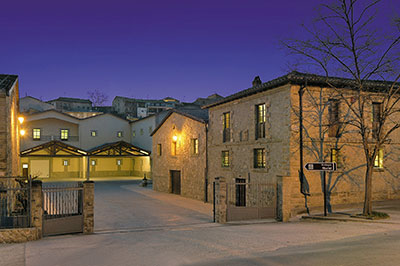 Julián Murúa Entrena founded this winery in 1986 in Elciego (Rioja Alavesa) follow-ing the steps of his father. Back in 1926, José Murúa set up Bodegas Murúa to trade with bulk wines among négociants across northern Spain but then sold the winery to Masaveu group in 1972. Muriel, the current winery's name, combines the family sur-name (Murúa) and the village name (Elciego).

Muriel is the epicentre of a large Rioja group which incorporates Bodegas Eguía and Marqués de Elciego in Rioja, Pazo Cilleiro in Rías Baixas and the table and PGI wine division known as Real Compañía de Vinos. But the jewel in the crown is the historic Conde de los Andes winery in Ollauri that the family purchased from Paternina in 2014 along with its outstanding collection of old wines. The company sells 12 million bottles a year.

Muriel Group owns 260 hectares of vineyards that account for 20% of its overall grape supply needs. One of the most distinctive properties is the 25-hectare El Gallo estate in Elciego (Rioja Alavesa) which was acquired from Marqués de Arienzo. Planted mainly with Tempranillo and Viura, it is the base of the two Viña Muriel Reserva (white and red). Montavillo is a 200-hectare vineyard located in the slopes of Mount Yerga (Rioja Baja). With 125 Ha. under vine, Tempranillo rules here. Other grape varieties include Mazuelo, Garnacha, Viura and white Tempranillo. The rest of the vineyards are scat-tered throughout Rioja Alavesa in the villages of Laguardia, Elciego and Viñaspre (Lanciego). The 4.5 hectares of old Tempranillo and Viura from Viñaspre will be des-tined to the Viña Muriel Gran Reserva from the 2018 vintage onwards.

Muriel has successfully focused in the export market (85% of the wines are exported to 40 different countries) and has managed to produce Rioja wines for powerful UK su-permarket groups such as Sainsbury's and Tesco.

Two ranges of wines are produced. Muriel is the largest and includes three young wines (white, rosé and red), and the three classics: Crianza, Reserva and Gran Reserva. The premium Viña Muriel range consists of two Reservas, a white and a red and a Gran Reserva.

Getting a taste for old Paternina vintages at Conde de los Andes in Rioja
The rebirth of Rioja’s ancient cellars
“The word Rioja helps to sell, but adding value is up to the individual”