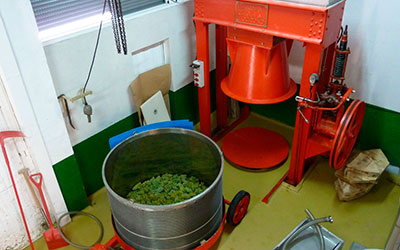 Basilio Izquierdo is an influential figure in Rioja. His more than three decades at Cvne (Imperial, Viña Real and some time at Contino) have given him a wide perspective of the region and its historical wines.

Already in his 60s, he launched a project in 2007 to produce a renewed version of the Riojas from yesteryear made with grapes from here and there. His red B de Basilio (€36) could well be a Viña Real from the 21st century: it blends 30% Tempranillo from Leza and Laguardia (Rioja Alavesa); 30% Tempranillo and a drop of Graciano from Haro (Rioja Alta) and 30% Garnacha from Tudelilla (Rioja Baja) and Cárdenas (Najerilla Valley). Despite its relatively high price, it shows a juicy, nervy character with more taste and intensity than structure and expressive red fruit notes.

The white B de Basilio (€38) is mostly Garnacha Blanca, an unusual grape in the region, with a small percentage of Viura in the blend. Fermented and aged in barrels for 8-11 months, it has been produced since 2007 although in very small quantities. Grapes come from the area of Briones. The wine was bottled with a glass stopper until the 2011 vintage with cork replacing it from the 2012 vinatge. Bottle evolution for some vintages is quite interesting.

The Acodo range includes a white (€19), a rosé (€25) and a red (€19). Their shared leit motiv lies in the origins of the vines, which precede the start of clonal selection. The quirkiest is probably the rosé – a blend of 70% Garnacha Tinta and 30% Garnacha Gris, barrel-fermented and aged on its lees for eight months.

Izquierdo does not own any vineyards. His website offers bespoke bottlings for customers who wish to purchase “a long-lived wine to celebrate a special date”. A rather suggestive offer coming from someone who is used to making wines for posterity.

Rioja through the eyes of veteran winemaker Basilio Izquierdo
Garnacha, can a grape be sexy?
Rioja in the 21st century: styles and categories of wine
Ten Spanish whites to enjoy this summer, including some orange wines