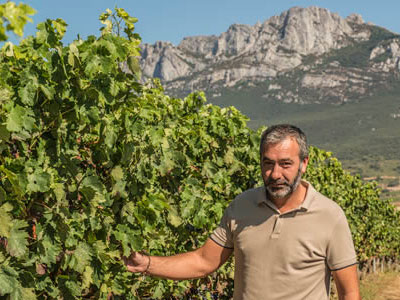 Carlos San Pedro is one of the leading winemakers in Rioja and a clear representative of modernity in the region. This winery is his personal project. As a member of a well-known wine dynasty from Laguardia (Rioja Alavesa), he went solo with one of the family vineyards planted by his father. La Viña Grande (also known as Finca Valdepoleo) has 15 hectares and lies at over 600 metres of altitude under the proctective shadow of Sierra de Cantabria. The first vintage in the market was 1998 but the winery was not built until three years later.

His entry-level red Pujanza was born from this first vineyard and some small amounts of grapes harvested from another plot. A 100% Tempranillo grown on 11 plots, it used to be aged separately and blended according to the style of the vintage and the evolution of the wines. After the 2011 vintage, this bottling was interrupted and replaced by Finca Valdepoleo (€19, 70,000 bottles) which is based on the original vineyard and presented on Burgundy bottles.

There are three single vineyard wines whose image was also renewed in 2011. The most important is Pujanza Norte (€40) now in a Burgundy-shaped bottle, which comes from one of the highest vineyards in Laguardia (650 metres), a long, narrow and windy plot (hence the name: norte means north). It was a present from his father on his 18th birthday and Carlos planted the vineyard with his own hands. Cisma (€130) is a rare bottling which comes from the tiny La Valcavada plot, planted straight on the rootstock and without grafting by his grandfather more than 80 years ago. Burgundian in style, it commands a much higher price. Production of Pujanza Añadas Frías (Cold Vintages) is even more anecdotal. Its Viura grapes come from the San Juan de Anteportalantina plot, which lies at 600 metres of altitude on highly calcareous soils. As its name suggests, it is only made on the coolest vintages. Climate change does not help much hence the only examples to date are the 2007,2010 and 2013 vintages.

The economic downturn prompted the launch some years ago of Pujanza Hado (around €11), a fruit-forward, easy drinking wine which is aged in barrels for up to 12-13 months. It has benefited from the changes in the range – since the 2011 vintage it is made from some grapes that used to go to Pujanza.

Carlos San Pedro's wines are generally a good example of modern Rioja. They are fruit-driven, expressive and round on the palate, with acidity as the guiding element helping them to be drinkable and balanced.

31 wines to try in August
Rioja in the 21st century: styles and categories of wine