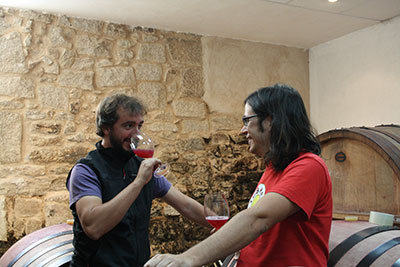 Two men have been instrumental in the rebirth of Gredos: Dani Landi, who also runs his own project in the area after leaving Jiménez-Landi, his family's winery in Méntrida, and Fernando García, who works as a winemaker for Bodega Marañones (Vinos de Madrid). Their commitment is unequivocal: “We want to know how far we can go with the variety and the terroir”, says Fernando. As a testament to their words, they are making wines in the three valleys mentioned earlier. They have recovered some very high and hard to reach vineyards and are trying to extend the growing cycle in order to slow down ripening.

Fermentations are carried out with stems, extractions are soft to “intervene as less as possible” and aging is done with lees in large wooden vats or fudres. Their approach is clearly Burgundian in style and France is their model in terms of terroir definition (regional, village and cru wines) and the search for minerality in their wines.

The name Comando G goes back to the winemakers' childhood and refers to a well-known cartoon series in which five youths defend planet Earth from outside threats. The letter G, from Gredos, Garnacha and granite, fitted perfectly and their debut came in 2009 with La Bruja Avería (a cult children's TV programme from the 1980), a fun, fruity and juicy entry-level red (€13, 28,000 bottles). It was later renamed Bruja de Rozas as grapes are sourced from Rozas de Puerto Real, a village at the entrance of Valle del Tiétar (Madrid).

The grapes that make Rozas 1er Cru (€30) are grown in this village too. This Garnacha comes from vineyards located on the foothills of the mountain (900 metres). It is a nice example of what to expect from Gredos' cooler areas. The vineyard of Las Umbrías (€90) is to be found at a higher altitude. This is a half-hectare plot with over 60-year old vines planted on granitic soils with some clay located on the top of the so called Roe Deer Mountain.

Other cru-like wines are the fresh, supple and breezy Rumbo al Norte (€90), from a vineyard in Navarrevisca (Valle del Alto Alberche, Ávila) at 1,150 metres of altitude, where vines grow among large rocks, in a difficult area to work. On the other side of the river and at 1,200 metres of altitude lies the north-facing vineyard which produces El Tamboril (€32), made from white and grey Garnacha. Tumba del Rey Moro (€60) is an almost vertical 70-year old north-facing vineyard with vines planted among oak, chestnut and fig trees in Villanueva de Ávila, in the same valley which produce a bright, long-lasting Garnacha.

The breathtaking beauty of Gredos in pictures
Does terroir matter in Spain's appellations?
Grenache soils in Spain
Sherry meets Rioja and other flor stories
Spanish wine growers: first steps towards excellence
Most popular stories in 2017
Comando G rescues old Garnacha vines in Gredos
On the trail of minerality with Pedro Parra and Comando G
Microbes, flamenco and an open-minded look at Spanish wines
Join us at our party in Lavinia Madrid!
Garnacha, can a grape be sexy?
The best pictures from the #LaviniaSWL party
Most popular stories in 2018
What do critics really value in Spanish wine?
A green cloak and nine unique bottles
Scorching heat and fire burn vineyards in parts of Catalonia and Madrid
Dogs are winemakers’ best friends
Most popular stories in 2019
Building fruitful partnerships with cooperatives
Harvest report 2020 (II): Southern Spain
Tasting with five Masters of Wine and other spring highlights