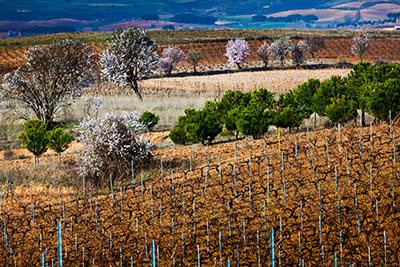 Since its original inception, Viñedos Alonso del Yerro has been an exemplary project. At this family-run winery, grapes are sourced exclusively from their own vineyards and they are determined to produce an accesible range of terroir-driven wines with just two labels in their portfolio. The winery is run by serial entrepreneur Javier Alonso and his wife María del Yerro, an interpreter and translator, with the eldest of their five children, Miguel, already working at the winery.

They had ambitious ideas for their project right from the start. It became pretty clear when they hired prestigious French consultant Stéphane Derenoncourt, who still looks after the wines. In 2006 French winemaker Lionel Gourgue joined the winery and since then, the wines have entered a new, more mature phase and have a more defined personality. The input of soil expert Claude Bourguignon has also been crucial. His aim was to reflect in the wines the limestone subsoil found in the area.

Located in Roa (Burgos), grapes are sourced from four different vineyards –Santa Marta, Quinto de Pedro, Viña Montserrat and Pago de los Mayores– which are further subdivided into various plots covering 26 hectares dating from 1989. Vines are trellised and planted at 800-850 metres above sea level with average yields reaching 30 hl./ha. The winery produces its own compost and plants cereal among vine rows in order to avoid soil compaction and a second sorting table is used after destemming during the harvest. It also favours malolactic fermentation in barrels, bâtonnage and microoxigenation.

Two wines are made at Viñedos Alonso del Yerro, both of them from local grape Tinto Fino (Tempranillo). Alonso del Yerro (€20, around 70,000 bottles) is their flagship wine, while María (€50, 7,000 bottles) is the top cuvée. Alonso del Yerro is a good example of the estate’s varied vineyards and soils. Individual plots (or similar groups of plots) are vinified separately and the 12 resulting lots are then aged separately prior to blending. Unsurprisingly, aging times vary according to the characteristics of each wine. By contrast María is the result of combining two different vineyards: one of them has fine sandy soils resulting in elegant and floral notes in the final blend; the clay-limestone ground in the second plot adds backbone and power.

In 2007, a second venture was established in the DO Toro, to the west of Ribera del Duero. Both projects share the same philosophy, although Toro is smaller, with just 9 hectares, mainly very old and ungrafted vines dating from 1930 and others planted in 1988. Paydós, made from the local variety Tinta de Toro, is the name of the only wine produced here.

There are special benefits for “Friends of Alonso del Yerro” programme, such as being entitled to a quota of new vintage bottles, taking part in tastings and events or experience harvesting at Santa Marta.

What to expect from the 2016 vintage in Spain
Alonso del Yerro, terroir-driven wines in Ribera