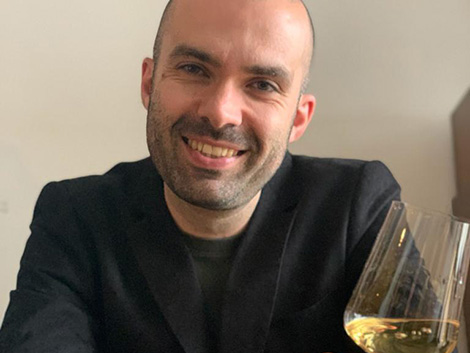 For Álvaro, the best thing about this difficult process was the opportunity to meet so many different people

Born in Barcelona and based in London since 2006, Álvaro Ribalta has joined the small group of Spanish Masters of Wine after successfully overcoming the last challenge in this hard, long road: a research paper on such a timely subject as traditional method sparkling wines in Penedès.

After finishing his studies in mechanical engineering in Barcelona, Ribalta moved to London to learn the language and live new experiences. He discovered wine working as a waiter and he soon enrolled in the WSET courses. For a while he combined his job at St. John, the Michelin-starred restaurant, with a master's degree in engineering. "At that  point I realised that what I really liked was wine," he recalls. In fact, he carried his master's dissertation into his own field as he focused on a wine bottling plant in Italy.

With his professional path laid out, he worked in different positions in wine until he joined importer Indigo Wines in 2014. Indigo specialises in small producers and manages a carefully selected range of Spanish wines. Ribalta has worked as business development manager here since 2018.

Signing up for the Master of Wine programme came naturally as his excellent grades in the WSET Diploma earned Álvaro a scholarship to study the first year for free.

Unlike other Spanish candidates, language was never an obstacle for him. "The greatest challenge was getting up in the morning and finding the motivation to keep going. It is very difficult to pass all the exams on the first attempt, especially the tasting part where the pass rate is just 10%," he explains.  For Álvaro, the best thing about this difficult process was the opportunity to meet so many different people. "My fellow students are now friends. I was the seventh MW in my study group and three of them passed on the first attempt. You also meet people from all over the world, which gives you global contacts”. He has also learned ("although you don't need to be an MW to do that," he points out) that there is always someone who knows more. "You have to be humble; the world of wine is huge with many experts in different areas. But if you apply yourself to it, you can learn every day".

The news of Álvaro becoming an MW adds extra visibility for Spain within the prestigious Institute of Masters of Wine. He joins a list of names such as Pedro Ballesteros MW, Fernando Mora MW, Andreas Kubach MW and Almudena Alberca MW, as well as three MWs who live in Spain: Norrel Robertson MW, David Forer MW and Jonas Tofterup MW.

Our first question to Ribalta after becoming a Master of Wine was: What needs Spanish wine to improve its reputation in international markets? This was his answer: "We have the wines, the diversity and the quality but we are not being taken seriously; if there was an easier solution, we would have surely implemented it a long time ago. Smaller countries with less diversity in their wines have a bigger presence on wine lists. Why can't Spain be just behind France? In the UK, Spain is at the same level as Austria. This country doesn’t have our rich diversity of climates and terroirs, but producers have done very well since the scandal they faced in the 1980s. Their exceptional marketing efforts have helped them boost their position among Central European wines. Germany or Greece are regarded on a par with Spain, even though they produce considerably less wine. Spain is still seen as good value for money".

Álvaro Ribalta MW plans to move back to Spain in April and he hopes to settle permanently in Catalonia. Congratulations and happy return home!