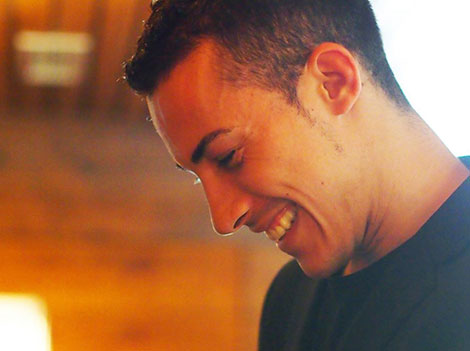 A desire to excel and an ability to always see the glass half full have helped Guillermo Cruz, 29, to be one of the most promising sommeliers in Spain. Although he was born in Zaragoza, he grew up among the vineyards that his family tended in Lanaja (Huesca) and remembers that wine was always present at the family table.

For Guillermo, wine was such a normal thing at home —when he was a kid, his parents would let him have “a small sip”— that it might have helped him realize at age 14 what he wanted to be when he grew up. With a great deal of passion and enthusiasm, he started to train as a sommelier. Right now, he is undoubtedly one of the sommeliers with the most solid training in Spain.

He started his studies at Zaragoza’s Catering School (“I spent one year learning kitchen skills and another one learning restaurant service”), followed by a Master in Winemaking ESAH and a professional sommelier course at Madrid’s Escuela de Cata (Tasting School). He is on the verge of completing his WSET Diploma in London which he combines with his Level 3 studies for Master Sommelier, a pretty tough qualification as it encompasses a theory exam as well as a restaurant service test. If he succeeds, Guillermo would become one of the first Spaniards to be Master Sommelier (Agustín Trapero, sommelier at London restaurant Launceston Place and Ferran Centelles, formerly at El Bulli are also working at it).

“I have to spend plenty of time studying, so I’ve decided to take on as much as I can. My holidays revolve around this and I devote a good deal of sleeping time to studying, but I do it because I firmly believe that I can achieve what I want with hard work. Rather than going to the beach, I visit vineyards around the world, but I do it because it’s fun”, says Guillermo.

“Spain needs more people with formal training —Pedro Ballesteros is the only Master of Wine in the country. Although wine is part of our culture, it is perceived as difficult and reserved for a selected few, and that fear has created a vacuum in one of the world’s leading production countries. Formal wine training is well established in other countries, but I think sommeliers here are gradually improving their knowledge. Individuals like Pitu Roca (El Celler de Can Roca, Girona), able to bring wine to the level of great cuisine, or Custodio Zamarra, Spain’s first great sommelier and recently retired from Zalacaín restaurant in Madrid, are some fine examples to follow”.

Travels as a sommelier

Guillermo combines his studies with his work as sommelier at Mugaritz (two Michelin stars) in the Basque Country, where he arrived over three and half years ago after stints at El Bulli’s former restaurant in Hacienda Benazuza in Seville and Vetula in Zaragoza.

During the three months that Mugaritz shuts every year, the staff enjoy one month holiday and two months of training. Guillermo usually spends this time traveling to wine regions to discover new wines, vineyards and, in general, to get a broader perspective on wine. Earlier this year he visited Alsace and Germany, but in the past he has worked as an intern in the Loire, where he spent two months working for four different producers.

“I think this kind of experiences improves communication with diners. We are three sommeliers at Mugaritz, each of us with a set of responsibilities. One is in charge of orders and admin, another one is into pairings and another one to traveling and discovering new interesting wines for our menu. We change approximately 30% of the wines in the list every year and that’s a joint decision between the three of us. It’s a team effort”, explains Guillermo.

Wine is essential with food but he rejects unnecessary tricks. “It is an accompaniment so wine should adapt to food and not the other way round”, he says. “Andoni [Luis Aduriz, Mugaritz’s head chef] created a dish with wine lees, but it was conceived as an element of the dish rather than as an ingredient”.

Gastronomy’s boom, propelled by the success of Spanish cuisine on the international level as well as by countless TV cookery programs, has meant that many youngsters in Spain want to become chefs instead of sommeliers or waiters. What does Guillermo think about this? Does he make a good living in this profession?

“It’s true that chefs are the stars, but a great restaurant would never be one without a good service. I try to make diners feel at home and enjoy the experience —being able to achieve that is wonderful. I’d love to see more people joining this profession”.

The wages are not the issue, thinks Guillermo. “At this level, salaries are similar for front-of-house and kitchen staff and are not bad at all. In any case, this is a passional job; money matters are not that important.”

He doesn’t have the recipe to get the young interested in wine, but he thinks that there are wines for all kinds of tastes and styles nowadays, with plenty of cheap and easy-to-drink options. Cocktails and kalimotxo (red wine and Coca-Cola) are fine if they bring wine closer to people.

“There’s no point in being a purist; if these mixes make people turn onto other things, they’re fine by me. There are some wines that I’d never mix, but there are others that qualify for mixing.”

He would like wine to have a modern edge, by making it available at night clubs and other leisure venues. Why not having parties where white wine is served by the glass at reasonable prices instead of Beefeater?, he wonders.

His favorite wines are Germany’s Rieslings (“seductive, versatile, with personality and food friendly”). In Spain he chooses Mencía from Bierzo (“producers there have reached new heights in a short space of time, focusing on old vines and making easily identifiable wines”), but he thinks there are many styles worth looking out for.

“Wines with soul and lovingly made have a bright future, although current favorites are fresher styles, with less concentration and more elegance; versatile, light wines which are food-friendly like reds from Galicia and Bierzo. Traditional, light-bodied Rioja classics are experimenting a comeback too”, says Guillermo.

Spanish whites remain a challenge, explains the sommelier. “There are some excellent examples, but there is still work to do. We’ve gone through some bad years when certain producers have focused on simple wines to sell abroad but I think we have some good years ahead, with more specialist and unique styles”, adds an eternally optimistic Guillermo.

Transferring Spanish cuisine’s great capacity to attract media coverage onto wine is the next challenge for the sector. “We have to believe in our products and be able to sell them. Chefs have done it so wine should be no different. Food and wine should walk hand in hand towards the same direction and join forces”, he concludes.

“Sherry has been badly mistreated”
“You don’t need to be a good taster to be a good sommelier”
Agustín Trapero: “The image of Spanish wine abroad is improving, except for Cava”
Send us your best Wine Lover shots of the summer
Sommelier Carlos Echapresto: “Rioja could be a victim of its own success”
Five Spaniards share their somm life experiences in London
The long hard road to become a Master of Wine
Spain’s best somms reveal their top Christmas wines
Nosing around for victory