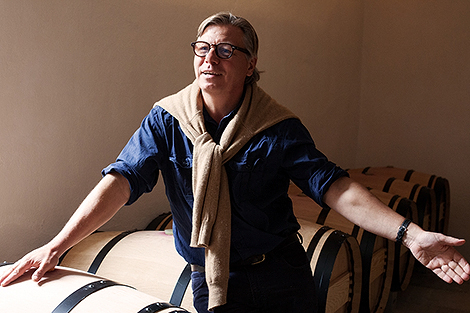 For Peter Sisseck, wine is a way of life. Photo © Pepe Franco

Eight years ago I wrote about Sisseck. I titled my piece “Peter Sisseck is Pingus, a lucky guy”, referring to the speed with which his Ribera del Duero wine had become an icon in international markets. I recalled the top scores given by Robert Parker after he tasted the wine en primeur in Bordeaux; the shipwreck that deprived American consumers of the first bottles sent to the US (with prices subsequently skyrocketing); or the effective mentoring by Jean-Claude Thuevin, Sisseck’s négociant in Bordeaux and the driving force behind garage wines. Overnight, Pingus, which is Peter’s nickname, became the most expensive wine in Spain.

To call him lucky would be totally unsuitable today, especially after the terrible loss of his daughter Alexandra in a traffic accident last year. Moreover it has always seemed unfair to me to talk about Pingus just because of its price tag. The truth is that both wine and winemaker haven’t rested at all. Eight years ago, Sisseck proudly showed me around his new laboratory. He wanted to know every little detail about his wines -from the very moment they were grapes- and especially which yeasts were responsible for fermenting each plot or vineyard. He still turns to the lab when he wants to run risks, like a trapeze artist performing without safety nets.

On this occasion, we visited the farm he is building, which will also be used as a training and lecture centre. Sisseck wants to show people the means to farm the land using sustainable techniques and preserving the natural habitat. A true believer in biodynamics (although he rarely talks about it), he has designed a fully-fledged farm with cereal and plant crops, animals and compost production.

Sisseck has reflected at length on high-quality wines, believes in styles beyond fads and trends and is fully convinced that wine owes respect to the land and to the cultural heritage of each region. He says he has turned wine into a way of life and in doing so he gives the impression that he has managed to go beyond wine itself. In his extensive report, Pepe Franco photographs with a particularly warm light the maturity and tranquility of a man who seems to have already found some answers.

The winery and the vineyards

Dominio de Pingus is located in Quintanilla de Onésimo (Valladolid), in the easternmost part of Ribera del Duero. The initial garage-like premises have gained ground, but the winery is still hard to find; the lack of signs make it highly inconspicuous. Vineyards are located further east in La Horra (Burgos). Close to the vineyards of Barroso and San Cristóbal -where Pingus comes from- new ones have been bought and others planted by means of massal selection. The gentle slopes are harmonious and serene. On our visit they were farming with horses. From this year on, the 33 hectares owned or rented by the winery will only be trodden by men and horses.

These practices are obviously difficult to apply on PSI, the most affordable wine within the range, at about €30. Made from vineyards owned by local vignerons in off-site facil-ities, it should eventually have its own winery. Sisseck has got more involved than ever in the region. The PSI project has been a perfect excuse to track historic vineyards in the area, many of them hopelessly lost. In addition, Peter became a member of the Ribera de Duero Regulatory Council in September last year.

Apart from Pingus, Sisseck consults for Hacienda Monasterio, the winery that made him move to Ribera del Duero. He also advises Clos d'Agon (Girona, DO Catalunya) and together with one of its partners, Silvio Denz (who owns Château Faugères in Saint-Emilion), they launched Château Rocheyron a few years ago. Based also in Saint-Emilion, the wines come from seven hectares they acquired in the Bordeaux right bank appellation.

It should not be forgotten that Sisseck got into wine through his uncle Peter Vinding-Diers just in time to taste the legendary 1982 vintage in Bordeaux. “With yields of 60 hl./ha., 1982 was the last classic vintage in Bordeaux. Since then there has been a revolution and somehow many practices have been distorted in order to achieve that 1982 effect. The Bordeaux I knew in 1983 has nothing to do with the way it is today. Family-owned properties have been replaced by corporations ruled by boards of directors,” he complains. “Everything is unnatural in Bordeaux. 90% of the land is planted with just three different clones and, as in Ribera, vines are quite young.”

During my visit I could taste different samples from 2012 and 2013. After the glorious 2009-2010-2011 cycle, defined by powerful and mouth-filling reds, just as anyone would expected from Ribera, Sisseck believes 2012 and 2013 will join the new trend towards finesse and balance. However, he also warns against excesses towards a lighter-style. “Spain is suffering from ‘Burgundytis,’ he says. “Trying to harvest Grenache at 12.5% can be attractive in terms of aromas, but you’ll taste stones on your palate. We should search for the soul of each region.”

Over the last years he has returned to a more traditional way of winemaking. "We have been refining the style without any abrupt changes,” Sisseck acknowledges. If possible, sulphites are not added during the harvest; fermentations start with natural yeasts using mother tanks for each vat; racking is back and microbiological stability is a priority in order to avoid filtration. New wood doesn’t play such an important role any more -Sisseck believes the texture of the wine emerges more clearly without it- and thanks to the arrival of PSI, barrels can be managed in a way that would not be possible otherwise.

Regardless of that, I tasted two fantastic 2013 barrel samples from the famous, brand new Taransaud T5 barrels, both of them form Barroso vineyard. The first came from a sandy area and showed perfectly defined red fruit. Crisp, juicy and extremely long, it was one of the wines that impressed me most. The second, marked by red clay, had more weight on the palate, firm tannins and a jammy character, but without losing juiciness. Another sample from San Cristóbal (gravelly clay), the second vineyard that goes into Pingus, showed an almost perfect length/structure on the palate.

As a novelty, the 7% Garnacha that goes into PSI 2012 makes for a gentler palate. Quite focused on red fruit, there’s a rustic edge that adds character. I also tasted two experimental Flor de Pingus 2012, both containing white grapes (20%) intended to fix colour but one of them had no sulphur at all. The way it felt was comparable to the removal of a veil or some kind of interference. It smelled and tasted like wild fruits, but was extremely well-crafted. Pingus 2012 (this was a barrel sample) had a really deep and complex nose with lovely forest aromas showing over red jammy fruit. Very impressive on the palate, precise, long, with a spicy touch on the finish that made me think of ginger.

Some weeks later I had the opportunity to taste the cool 2013 vintage at Vila Viniteca’s en primeur tasting in Madrid. Generally speaking, the wines were less structured although full of finesse. PSI: floral, fresh, savoury and already with 10% Garnacha. Flor was leaner than usual and had notes of liquorice and black fruits. With Pingus you could almost hear the fruit crunching in your mouth. It was perfectly defined: fresh, minty, elegant and showing great persistence. In terms of structure and ripeness, it could arguably be the least recognisable Pingus, but it is nonetheless a truly fascinating wine.
Now that fermenting with stems is so fashionable, I would like to remind that Sisseck has always worked with whole bunches -up to 40%, in some cases- depending on harvest conditions. As a general rule, stems must be fully ripe so it is usually discarded in cool vintages.

Being a Danish winemaker who has significantly helped to raise the image of quality of Spanish wines around the world, what does he think of them?  After more than two decades in Spain, Sisseck describes "a country of big wineries and small growers. In Burgundy, where owners are also growers and properties are family-owned, everything is more intimate and producers run the day-to-day work at their wineries. Italy has 35,000 growers who produce their own wine, but in Spain we are well below these figures,” he says. "Fortunately enough, Spain is changing a lot. It is no longer so much about the size of the winery. Families with long wine traditions like Muga, Murrieta and Riscal have gained ground".

And what about great wines? "All great wines have already been made in the past, in an untainted world planted with wholesome vineyards, naturally processing grapes (no pumping) in the best possible way and with great vintage variability. Today there are very few bad vintages, but also very few really good ones because we are forcing things too much. We have learnt from technology but are not capable of leaving it aside when necessary, and of course this never happens in big wineries,” he laments.

Sisseck has been exploring the intuitive way for some time (although he has his lab’s safety net) but he probably looks back with nostalgia to the pre-technological era.