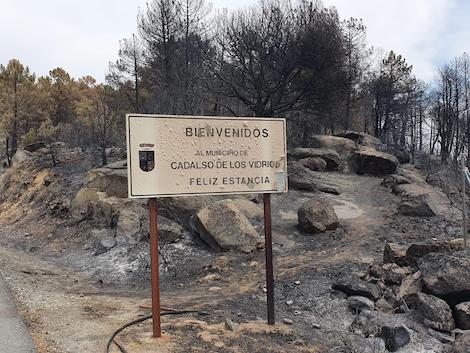 The welcome sign to Cadalso de los Vidrios, in the province of Madrid. 3,300 hectares of land were destroyed by fire in central Spain. Photo: Fernando García, Comando G

While txakoli production areas enjoy the beginning of a sunny summer with pleasant temperatures that suggest, for now, a good vintage, some vineyards in other parts of Spain have literally burned with heat and fire.

Ester Nin and Carles Ortiz, growers in Porrera (Priorat), were among the first to publish the devastating images of the damages to their vineyards caused by the heatwave of the last weekend in June, when temperatures of up to 42ºC were reached. "Some vines have died and kilos of grapes burned despite not having treated with sulphur for 10 days, and without having removed the leaves that provide shade to the grapes," Celler Nin Ortiz explained on their Facebook page. "The consequences are unknown; older people don't remember ever seeing anything like this. Climate change is here and it is affecting everyone.” Further north, in La Morera de Montsant, Aitor Trabado from Celler Pasanau understands how his neighbours in Porrera feel. "In our Los Torrents vineyard, a canyon facing west that lies midway between Poboleda (340m) and La Morera (700m), we have lost half of the Cariñena, some 1,000kg of grapes, from both old and young vines. Luckily, only the fruit has dried, not the plant", explains Aitor, relieved because their Garnacha vines have not suffered any damage. "From Los Torrents comes the Cariñena that we use for the eponymous wine, which is a blend with Garnacha. It will be Vi de Paratge from the 2017 vintage but we will have to see what 2019 looks like".

Their winery and other vineyards are in La Morera, on the foot of the Montsant mountains, where 40ºC were recorded at the weekend. “Bunches here are fine but the the end bits have dried out because the berries are still very small,” explains Aitor, who adds that grapes in this area ripen a couple of weeks later than in the southern end of Priorat.

“El Vell Coster, our Cariñena vineyard in Poboleda, has so far held, but we’ll see how it goes because the forecast is more heat over the next days. “This week we have exceeded 31ºC every day and at night the minimum does not fall below 25ºC", warns Aitor. "If this heat wave had happened at the end of July, when the fruit is bigger, the plants would have withstood better". José Mas, winemaker at Costers del Priorat with vineyards in Bellmunt, Torroja and El Molar, explains that their losses have been limited (5% of the Cariñena) because as the year has been dry so far they avoided desuckering vines intensely. "This saved us but the clusters that were not shaded are damaged on the shoulders. We'll see what happens in August, when veraison starts", says Mas. "A strict selection on the sorting table will also be necessary to remove the dry berries and prevent the wines from feeling hard or with pine nut flavours".

The DOQ Priorat Regulatory Board estimates that 20-25% of the harvest has been lost, although there are vineyards where 90% of the grapes are damaged. Extreme heat has ravaged red varieties such as Cariñena (especially the youngest plants) and Syrah. Among the whites, the most affected are Pedro Ximenez and Cartoixà. Fortunately, Garnacha, which represents 41% of the total vineyard area in the region, has coped well with extreme temperatures and warm desert winds in a year with 50% less rain than usual in Priorat (90 litres as opposed to the average 170 by the end of spring).

In this area surrounding Priorat, the 20 hectares of organic vines grown by Josep Grau Viticultor have not been damaged. "In view of the dry winter and spring we've had, we decided to de-leaf later in case the heat came," explains Modesto Arroyo, winemaker at the Marçà winery.

Ten kilometres further inland, in El Masroig, José Carlos Ríos is still surveying the damage to the 500 hectares of vineyard he manages, but he says: "The Cariñena is a late-ripening variety so its skin was still tenderer than others and that's why it got the worst of it", explains the technical director of Celler Masroig, the largest winery in the DO Montsant. "We hadn't done any treatments, but that's irrelevant; the extreme heat has  impacted those who had given a hand of sulphur to protect the plants from powdery mildew as well as those who hadn't", he adds. "We reached  45.5ºC last weekend. I'm from Seville and I'm used to the heat but the sensation, with only 7% humidity, was like being in an oven". Ríos believes that the fire that took place a few days earlier about 25km from Montsant may have reduced the humidity exacerbating the damage.

Now a new time is beginning because nobody knows what will happen, although Celler Masroig's technician asks that alarmism be avoided. "The local elders do not remember such extreme temperatures at the end of June so it is time to adapt to this situation and change our mentality. The growers here are very professional and they work very well but we will have to adapt to the situation, clear less leaves and protect the clusters".

Further south in the province of Tarragona, Joan Lliberia, owner of Edetària, reports some damage in the region, especially in the valleys where less air flows. In terms of varieties, Cariñena, whose clusters tend to hang more than in other varieties and are less protected from the sun, bore the brunt of the heat. "On this occasion, lack of water was not the problem. The damage has been indistinct in both irrigated and dry vines. The sun radiation was so strong that it just scorched the leaves". Lliberia is still assessing the damage to his 60 organic hectares, but he says that the Garnacha Blanca grapes resisted well because they were protected by the leaves, which suffered some damage. In contrast, the Cariñena leaves are in good condition but the grapes have dried.

In the far north of Catalonia, the heat of last weekend also burned some of the Cariñena vines owned by Salva Battle (Cosmic Vinyaters). As in other areas further south, plants in deeper plots, with less ventilation, have suffered the most, along with those facing the afternoon sun. "In some vineyards we have lost between 15% to 20% of the grapes but in others the damage is as high as 50%," says Salva. As in the case of Edetària, Cariñena took the brunt while in the case of Garnacha, the damage is on the leaves. And the heat is still lurking. The past weekend saw temperatures rising to 41.5ºC, not far from the 37ºC and rising on the day we talked to Salva [July 4th]. In spite of everything, the eternally positive Salva is not discouraged. "Although the plants suffered dehydration, the soil still has moisture. Sunscreen protection would have been of great help". He's not joking. After this experience, he discovered, thanks to other grape growing friends, that such a remedy exists and is suitable for organic vineyards, although he is not going to use it for the moment. "You have to accept what’s there without forcing it; we will see how the plants evolve iover the next two months until the harvest".

The fire started on 28 June in a farming area with trees in the village of Almorox (Toledo) and burned 3,300 hectares in this province and in the Community of Madrid. The flames are now extinguished but the consequences of this fire will be felt in the region for a long time to come.

In addition to the alarm for the inhabitants of Cadalso de los Vidrios and Cenicientos  —some had to be evacuated, although fortunately there were no casualties —, the damage to the landscape and the environment is considerable.

"Oaks, chestnut trees, ashes, holm oaks, almond trees, olive trees and the entire scrubland is burnt", explains Fernando García, from Comando G. The fire also caused direct damage to some of their vineyards. "We have lost a hectare, completely scorched, that we were recovering in the mountains and between 10% and 15% in Peña de Cenicientos. The vines next to the boundaries have been burned and others are scorched by the heat," explains Fernando, whose winery is in Cadalso de los Vidrios. “The village cooperative has lost the most vines.”

What will be the effect of the fire, the most serious in the province of Madrid in the last 20 years, on the wines of the 2019 vintage? "It is likely that there will be a loss of quality in the grapes, both from the heat shock and the fire," adds the co-owner of Comando G. "There is also a risk that the wines will smell of ash, burnt, barbecue, as happened in Chile and the United States. For his part, Andreas Kubach (Peninsula Vinicultores) still does not know the real extent of the damage although he is aware that they have lost some small vineyards in the mountains and that some vine edges are also burnt. "We are committed to this area because there are a lot of old vines in danger of disappearing", says the Master of Wine. "And although vines are very resistant plants, it makes no business sense to replant them in an isolated and mountainous area".

Another big problem is the neglect of mountain areas. “We lack a proper forest management policy, here and in many other parts of Spain. This, added to the heatwave, is an addtional danger," adds Kubach.

Aware of the critical state of their mountains and with the fire embers still simmering, the producers of Cadalso —the village cooperative, 4 Monkeys, Miguel Santiago, Finca Mariscalas and Luis Saavedra, in Cenicientos— have joined forces to submit to the authorities a project to repopulate the land with native species, clean the mountains, replant vineyards in historical areas that have suffered the fire with traditional dry goblet vines and build dry stone walls around them.

"If it succeeds, we want to extend the project to all grape growers who want to work in this way", adds Fernando García.

For the time being, as Andreas Kubach says, "the greatest help is for people to buy and drink wines from the damaged areas".