The first interaction that we know of between humans and wild vines in the Iberian Peninsula goes back almost 800,000 years. The pollen remains found in the Gran Dolina archaeological site in Sierra de Atapuerca (Burgos, Castilla y León) indicate that the fruit of these wild vines was collected and consumed by the Homo ancestor that inhabited this place. Therefore, the presence of wild vitis vinifera is at least 780,000 years old in Spain.

The next important milestone is the arrival of vines from the East. The Phoenicians brought them in the 9th century B.C. The main vestiges of this period include seeds found in wine presses in Sierra de San Cristóbal in Cádiz (Andalucía, south Spain) and in Denia (Alicante, southeast Spain), dating back some 600 years BC. We have no data on the grape varieties grown by the Phoenicians. In that time, wine was a scarce commodity which was used as an offering to the deities; it was the drink of the gods. Once the grapes had been crushed, the must was mixed with fruits and heated in ovens to 200ºC resulting in a sweet, fruity, rich liquid, halfway between sangria and syrup.

The Romans turned wine into a popular drink, expanded vine growing, improved the grape varieties and boosted the trade and the use of wood and clay to transport wine. In the first century, Columela was the first author to mention cultivars that we know today: Jaenes Purpureas, Teta de Vaca, Cabrieles and Apineas, which are presumably our current Muscats. In fact, he describes three types of early-ripening, sugar-rich Apineas with varying levels of grapey Muscat flavour, all of which, he says, are best trained in pergolas.

The arrival of the Muslims to the Peninsula in the 8th century represented a radical change in the growing patterns established by the Romans. Between the 9th and 11th centuries, many agricultural treatises were written in the increasingly popular Andalusian Agricultural School. Muslims encouraged the use of table grapes and changed the way of propagating the vine. Thus, the layering of vine shoots practised by the Romans to preserve the quality as well as the identity of cultivars was abandoned. Agronomist Ibn Bassal described how "the bones of raisins [the seeds] are planted so that a type of vine can be transferred from one region to another in September". The goal was to increase the diversity of grapes for fresh consumption. His colleague Al-Tignari describes the sowing process for vines that are not transplanted; they were arranged in pots and subsequently planted in Granada's cármenes -carmen comes from the Arabic word "karm" which means "garden" or "vineyard".

Among the varieties grown by the Muslims that we know today, Abu Zacaria (or Ibn Al Awam) mentioned two types of reddish Muscat in his Book of Agriculture. One of them, described as having round berries, could well be Muscat à Petit Grains ("red and round grapes"). When it is fully ripe, it acquires a deep gold, almost reddish colour, while the red and elongated grape could match the pink-berry Muscat.

From the Middle Ages to the discovery of America

Between the 12th and 15th centuries grape growing was fundamental in the reconquest of the land. It was a task for the Cistercian monasteries, considered to some extent as the origins of today’s appellations of origin. Wine became a staple food as well as a source of enjoyment, although it was strongly linked to the Catholic religion. One of the most important routes for the circulation of varieties was the Camino de Santiago, which crosses the northern part of the Peninsula.

The discovery of America in 1492 ushered in the Modern Age. Wine growing was still attached to religious orders and the need to produce wine for Catholic worship, but there was also an attempt to develop the local economies of the new continent. Vines were sent to America to boost wine consumption. The Jesuits carried the first cuttings to Mexico at the end of the 15th century.

In 1513, in the midst of the Spanish Renaissance, the agronomist Alonso de Herrera listed the following grape varieties in his Agriculture Treatise: Albillo, Torrontés, Moscatel, Cigüente, Jaén, Hebén, Alarije, Malvasía, Lairén, Palomina, Aragonés, Palomina (negra), Herrial, Tortozón, Vinoso, Castellano Blanco, Castellano Negro and Uvas Prietas. Except for Herrial and Vinoso, the rest are still grown in Spain and have the same names and features described in the book.

Heben, also known as Gibi, played a central role in Spain’s and Portugal’s varietal map. Believed to hav originated in North Africa, it has female-only flowers, so reproduction by seeds between the 9th and 12th centuries resulted in a significant number of descendants. Many varieties currently grown on the Peninsula are the result of natural crosses between Hebén and other grapes mentioned by Alonso de Herrera in his treatise. The chart below shows the male parents crossed with Hebén in blue and their offspring in red. This is the first time that all these parent-offspring relationships are published together. 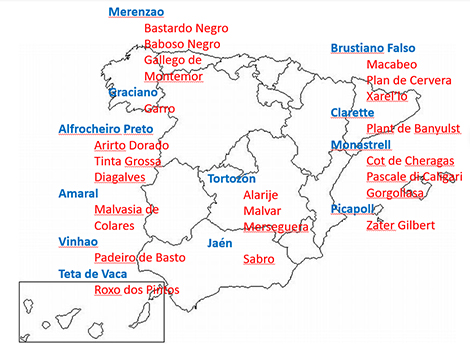 According to the ordinance of the Casa de Contratación de Sevilla, issued in 1522, "all ships leaving for the New World must carry vines". Thus, Spanish settlers introduced vines to Peru between 1535 and 1541, then to Chile (1550-1551) and thence to Santiago del Estero in Argentina in 1557.

Grape varieties broguth from Spain included Listán Prieto, called Criolla Chica in Argentina, País in Chile and Mission in the US; Negra Corriente, aka Prieta in Perú; Mollar Cano or Negra Criolla in Perú; and Moscatel de Grano Gordo (or Moscatel de Málaga or Moscatel de Alejandría). The majority of American native cultivars come from crosses between three of these grapes, as described in this chart. 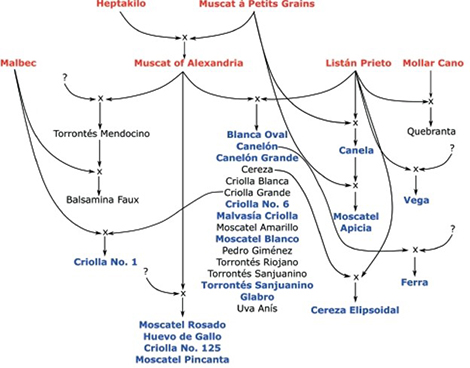 The arrival of phylloxera in Spain in 1877 wreaked havoc on a large part of the country's varietal heritage. Figures are impressive in terms of area under vine. Out of 2,030,850 hectares in existence prior to the insect's attack, 1,162,103 were destroyed or damaged. In 1912, engineer and ampelographer Nicolas García de los Salmones revealed 2,456 mentions (including synonyms) of grape varieties grown in different locations in Spain. 178 are still cultivated today, but we are not aware of the existence of 587 of them, at least by the names listed in his work.

Throughout the 20th century, grape diversity has decreased dramatically. Before the turn of the millennium, nine grape varieties (Airén, Tempranillo, Garnacha, Cayetana, Monastrell, Bobal, Macabeo, Palomino and Pedro Ximenez) accounted for 85% of the total area under vine.

Nevertheless, many appellations were particularly active in recovering indigenous varieties in their respective areas. To them we owe the rebirth of Godello, Verdejo, Parellada, Xarel.lo, Merseguera or Planta Nova (white), as well as the reds Mazuelo and Graciano.

In the 1980s the US TV soap opera Falcon Crest -called Viñas de Odio (Vineyards of Hatred) in some Spanish-speaking countries- put the spotlight on French varieties like Cabernet Sauvignon, Merlot and Chardonnay. The fashion reached Spain, where they were generously planted, though not all of them were really new to the country. Guillermo Hurtado de Amézaga had brought Cabernet Sauvignon to Marqués de Riscal (Rioja) in 1860. Eloy Lecanda followed in 1864 as he planted Cabernet, Merlot and Malbec in his Vega Sicilia estate in the present-day Ribera del Duero appellation.

Globalisation of international cultivars continued during the first years of the 21st century. Carlos Falcó, marquis of Griñón, was a leading figure behind this trend. In addition to Cabernet Sauvignon and Merlot, he planted Syrah and Petit Verdot in his estate in the Montes de Toledo (Castilla-La Mancha). Other French international varieties introduced in Spain in recent decades include Sauvignon Blanc, Gewürztraminer, Pinot Noir and Malbec. Major trends in Spanish vineyards between 1990 and 2019 include:

The revival of indigenous grape varieties

Although international varieties are still being planted, the 21st century has also witnessed a shift from globalisation and the active recovery of minor cultivars.
In 2011, 22 research groups from all over Spain decided to survey mountain areas in which vine growing had been neglected for decades but where unidentified relictual genotypes could be found. They also explored the river valleys of eastern and central Asturias; the Liébana area in Cantabria; the Pyrenees and Pre-Pyrenees of Navarra, Huesca, Lérida and Gerona; Arribes del Duero and Sierra de Francia in Castilla y León; the area surrounding San Martín de Valdeiglesias in Madrid; mountain ranges in Cáceres, Granada, Murcia and Valencia; La Manchuela; Sacedón and Mondéjar in Guadalajara and the Balearic and Canary Islands.

The 2,175 samples obtained were classified and analysed in the hope of increasing the number of minority grape varieties. The aim was to bring diversity to Spain's varietal heritage, whilst identifying quality, disease-resistant grape varieties to face climate change. Among the unknown samples, 208 were isolated cultivars that appeared in one single location, but 95 were found in two or more locations so far apart that they could not have possibly originated from a single seed. Those were identified as new grape varieties and given the local names by which they were known. Among the most interesting are Tortozona Tinta, Planta de Vic, Jarrosuelto, Botón de Galo, Tinta Redonda, Tortojona, Terriza, Soto, Aleuia and Cedrés. The map below, which shows the places of origin of the plant material, indicates that many of them are likely to have been widely present in the Peninsula in the past. 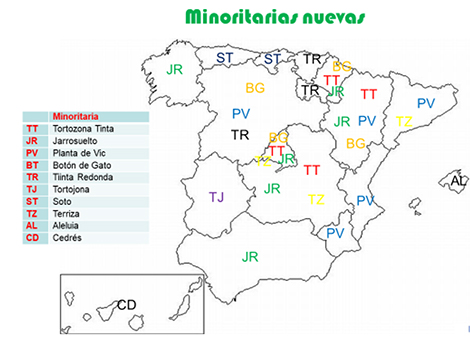 For what they can provide in terms of diversity and future potential, at El Encín Vine Collection in Madrid we recommend the preservation and development of these native cultivars.

Could vine diseases change Spain’s varietal map?
How many grapes are there in Spain?
A better future for Spanish wines with pre-phylloxera grapes?
Castilla y León: a treasure trove of rare varieties