Those who have followed Aurelio Garcia’s career and tasted the wines he produces at Valquejigoso in Villamanta (Madrid) or others he makes as a consultant at Valdepotros in Carabaña, also in Madrid, or Lagar de Isilla in Ribera del Duero, may be surprised to find how different they taste from the ones he and his wife Micaela Rubio make in their family project. In contrast to the fuller reds -often backed by international grape varieties- he regularly makes, the wines of Aurelio and Micalela focus on their roots, personal taste and local grape varieties and sites with unique soil features.

Sold primarily abroad since the 2012 vintage, the wines, sourced mainly from Cuenca and Gredos, were eventually released in Spain in 2000. Full of self-confidence, the couple did not shy away from setting prices well above the average in those areas. “These small regions are a gateway into international markets,” claims Aurelio.

The son of a truck driver

To juggle their own wine project with their busy schedules, Aurelio and Micaela built the ageing cellar on the ground floor of their home in La Alberca de Záncara (Cuenca, central Spain). Fermentation facilities are only a stone’s throw away, in the spacious premises where his father, a lorry driver, used to park his trailer.

Aurelio has no childhood memories of harvesting with the family, but rather of weekends doing his bit to have the truck clean and shiny. "My father instilled in us the value of work from a very early age; as a teenager and university student, I spent my summers helping him," he recalls.

He attended university in Ciudad Real, first studying Chemical Sciences and then Food Technology, where he learnt about viticulture and winemaking. Wine-loving teachers like Professor María Dolores Cabezudo or Isidro Hermosín, a specialist in polyphenols, opened his eyes to a new world that, eventually, proved far more appealing than the exam he passed to teach at a secondary school. Aurelio began his wine career in 2003 at Bodegas Mont Reaga (Montreal del Llano, Cuenca) alongside Juan Fuentes, a well-known flying consultant in Castilla-La Mancha. From there he went onto Villamanta, in Madrid province, where he started to fly solo by taking charge of Valquejigoso’s ambitious range of wines.

From Cuenca to Ribera via Gredos

Since then, Aurelio has simultaneously worked as technical director of this winery as well as a consultant, but also dreamt about making his own wines in partnership with his wife, who is also an oenologist. Born, like Aurelio, in La Alberca de Záncara, Micaela Rubio has developed most of her career in Ribera del Júcar (Cuenca, Castilla-La Mancha), first at the Casas de Benítez cooperative (Bodega San Ginés) and later at Pozoamargo’s Casa Gualda. She still remembers a vine grower, just short of two metres tall, arriving on a tiny, toy-like tractor with his diminutive but excellent-quality Bobal grapes, some of the best at San Ginés. The vineyard they were sourced from, along with many others that failed to be tended by younger generations, are now part of their project.

Given her remarkable experience with Bobal and her unusual name firmly rooted in her family, it seemed quite natural that the couple's wines from Cuenca should bear Micaela’s name. There is a second project in Gredos called Alto Horizonte. The portfolio in both cases starts with an entry-level village wine, followed by a vino de paraje from a specific site and a single-vineyard wine at the top of the range. Given the winery's location, the wines produced in Cuenca are released as VT Castilla and the ones sourced from Gredos are sold as table wines or Vino de España, although they expect to have their own winery in this area in the future. 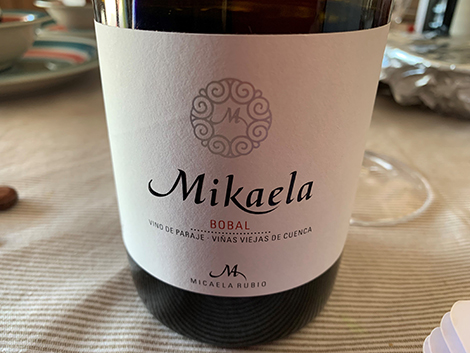 Both projects come under the general umbrella of Aurelio García Wines and there is a third venture in the pipeline set to be released by the end of November under the seal of DO Ribera del Duero. It’s just one wine – “it is an excuse to keep visiting an area to which I feel particularly attached to,” says Aurelio. La Guía de Aurelio García, as the wine will be called, is made from old vine Tempranillo with some white Albillo from Matanza, Soria, in the eastern tip of the DO. Fermentation is done with around 30% whole bunches and the wine is aged in 500-litre seasoned barrels so that the style is more in line with the fresher, terroir-driven wines of this increasingly sought-after corner of Ribera del Duero.

The Bobal project is focused on a triangle-shaped area with distinctive soils in the villages of Pozoamargo, Casas de Benítez and Casas de Guijarro, all of which are part of DO Ribera del Júcar in Cuenca. This relatively flat land shaped over a Tertiary sedimentary basin was gradually filled with materials from the surrounding mountains as well as rivers and lakes from an ancient landlocked basin.

The bulk of the vineyards (85%) are in Casas de Benítez; the rest in Pozoamargo, an earlier ripening area that lies further away from the River Júcar. They own 7Ha and buy some grapes from growers who have preserved goblet-trained vines -these traditional plantings are under threat due to the lack of generational replacement and increasing constraints to find labour to pick grapes.

The soils are covered with pebbles that preserve moisture. Underneath lies "a layer with various amounts of sand or clay, plus some gravel, invariably leading to limestone", explains Aurelio. "There are very few places with these many stones and uniformity of size", he adds. As the pebbles are not large, there are more of them making it easier to till the land and also to release the heat stored during the day. The picture below shows how the soil underneath remains cool. 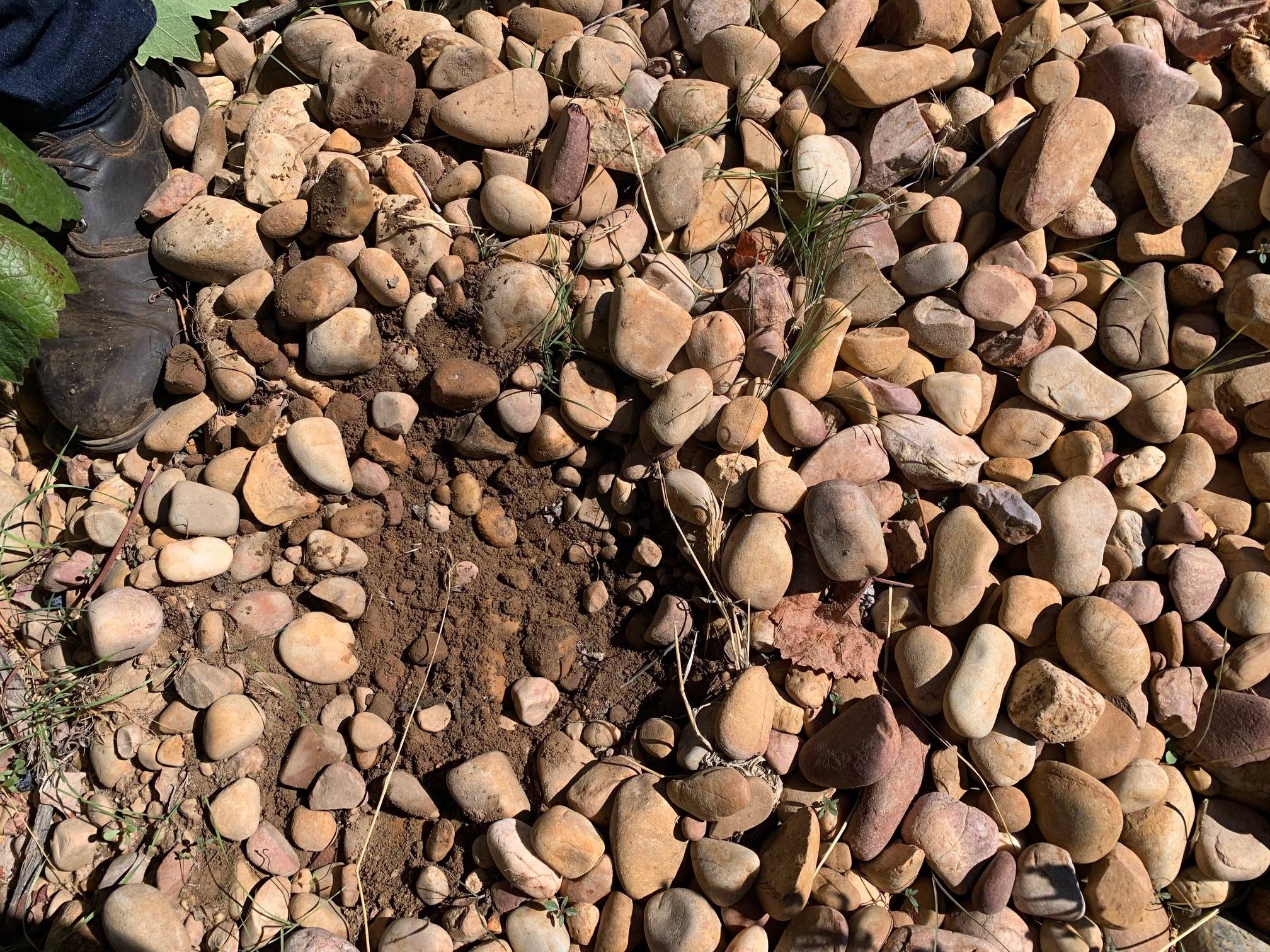 They have bought old, dry-farmed vineyards with remarkable diversity including different clones of Bobal as well as other grape varieties like Rojal (also various clones of this one), Coloraíllo, Pintaíllo, Moravia Agria and intermixed white varieties. They are not after low yields; instead, they prefer to have 5,000 to 6,000 kg/ha so that grapes ripen slowly and can better express the soils. The area has the right conditions to produce healthy grapes (from 2023 the wines will be organically certified). Biodynamic treatments are applied in rainy years as Bobal suffers considerably in cold springs. Vines are tilled once a year, clusters are thinned out after veraison to remove bunches that have been exposed to the sun and leaves are removed from the inner part of the plant to provide aeration while avoiding trimming in order to shade bunches. At harvest time they look for crunchy grapes. In a warm vintage like 2022, alcohol levels ranged between 12.7 and 13.5% abv.

The entry-level red El Reflejo de Mikaela (14,000 bottles, €18) is an easy-to-drink, Beaujolais-style red. It is fermented with 30% whole bunches in stainless steel tanks, then aged in moderately porous French vessels made from clay and silica and barrels (new oak is usually destined to this cuvée). The herbal part of the stems is present on the nose (I felt this was a wine of style rather than terroir), but the palate is fresh and juicy.

Mikaela (€30, just under 3,500 bottles) is a great way to discover Bobal's many charms and potential -in the past there was a lack of confidence in this variety, which still needs more discerning eyes willing to explore its ability to produce fine wines. Grapes are sourced from El Poleo, a sand-rich area influenced by pine forests adding a marked Mediterranean character and finesse on the palate. The 2019 vintage also displays meaty nuances and good depth. The firm, ripe tannins give way to a long finish with forest and scrubland notes.

Although not easy to identify in the flat landscape, the top red La Infanta (just over 500 bottles, €90) comes from the most elevated point in the basin. When the ancient lake dried out, materials swept to the sides, so the soil is shallower and the limestone bedrock lies at 30 cm. This is the first vineyard that Aurelio and Micaela bought for their project: the one tended by the tall vine grower that produced small grapes. It consists of four small plots planted next to each other (there used to be a fifth which is lost) in 1919 following the ancient tresbolillo (staggered rows) pattern. Delicate floral (lavender) nose with some meaty notes on the background. The palate is very different: refined and almost ethereal at the beginning growing in depth to end extremely long. Bobal can also mean finesse. 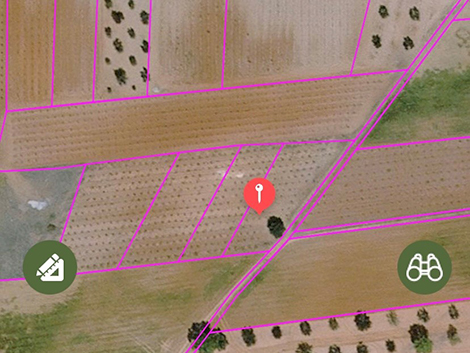 Looking for elevation in Gredos

With 3ha of their own, two rented and 35% of purchased grapes, the couple chose Gredos (the mountainous, granitic range that divides Spain’s central plateau in two halves) for its elevated sites in the province of Ávila, notably in the village of Navatalgordo and to a lesser extent in Burgohondo. Overall, they look after 50 tiny plots of 80+ year old vines, some of them at over 1,100m elevation.

The 2020s -a fresh vintage- are particularly expressive. Stems are generously present in the fermentation, but they go unnoticed as the wines feel balanced. The floral, fragrant entry level red +Altitud (11,000 bottles, €16) is a great example of Gredos’ gentle, low-extractive Garnacha with chalky tannins on the finish.

Alto de la Cruz (under 5,000 bottles, €30), which is the equivalent to Cuenca’s Mikaela in Gredos, plays a similar role as it conveys a pure, highly recognisable expression of the area. Grapes are sourced from a terraced area in Navatalgordo with a fair amount of clay adding structure and ripeness within the refined style that marks all of the wines. A pure nose with flowers and orange peel aromas followed by a mouth-watering palate with marked saltiness on the finish that enhances the wine’s character. 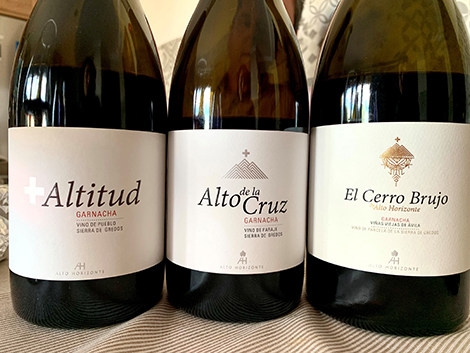 As with the wine La Infanta in Cuenca, the top Gredos red El Cerro Brujo (under 800 bottles, €90) goes a step up and tries to express the extreme “verticality of granite”, says Aurelio. The plot is just under half a hectare in a site called La Jorá or El Morisco with a 40% gradient and eroded, washed out, pure granite soil. Although not short of depth, this is the most delicate, almost naked wine of the range. There is very little fruit here -instead, it feels like licking wet stones. If you want to taste soil in your wine, this is your kind of Garnacha.

The project is growing slowly but surely. In 2022, 55,000 kg of grapes have been handled; 30,000 from Cuenca; the rest from Ávila. Of all of them, just over 10,000 kg will be destined to produce wines in partnership with third parties. Brand new concrete tanks were delivery recently to host the paraje wines next harvest. Although plastic recipients are also used for fermentations, their small stainless steel tanks (3,300 to 3,500 litres) are great to work with small batches and get to know their plots better.

In the basement, next to the barrels and clay jars, Aurelio and Micaela have their own, eclectic and well-stocked cellar with wines from classic areas in Spain and the rest of the world and plenty of Spanish regions that have experienced a renaissance in recent years. It seems clear that their wines are benefiting from the knowledge, experience and contacts acquired over their many years of work as winemakers.

They truly believe in the regions they work and dare to price their wines in line with the age of their vineyards and the quality of their wines. Those struggling in regions wrongly described as minor or marginal should give heed to Aurelio García’s advice: “Right now, it is easier to sell abroad Spanish wine from lesser-known regions than from well-established areas like Rioja and Ribera del Duero.”