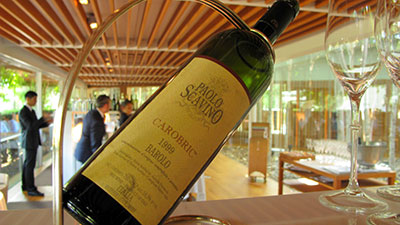 After 10 years in the World’s 50 Best Restaurants and three Michelin stars, El Celler de Can Roca’s gastronomic credentials are well known. But what is really special about El Celler is that it has been able to maintain its hospitable family essence, despite its glittering cachet. No wonder it has become a place of pilgrimage for foodies and wine geeks worldwide.

Behind this feat are brothers Joan (head chef), Josep (wine and dining room) and Jordi (desserts) but also their parents, who passed onto them the passion, effort and dedication required to manage a restaurant. Montse and Josep knew what they talked about: in 1967 they opened Can Roca, a bistro in a working class area in Girona, 100km north of Barcelona —El Celler’s germ— which is still there. It was at this modest place where Joan and Josep started to work and learn the ropes, later helped by Jordi’s arrival once they had moved in 2007 to El Celler’s new premises up the road from Can Roca. It is clear that they have not forgotten their origins, found in many of the dishes and wines available in El Celler.

The combined skills of the three brothers give way to a perfect three-sided game which culminates with the Classic Tasting Menu (€155) and specially the Festival Menu (€190), a gastronomic, sensory and emotive pleasure which is hard to match. The journey commences with five starters transporting diners to five different locations in the planet (Turkey, Mexico, China, Morocco and Korea). They represent the Roca’s global vision and are followed by an appetizer with caramelized olives —with evident Mediterranean roots— served on a bonsai tree.

Myriad dishes —all surprising, delicious and spectacularly presented— are served by a small army of waiters led by Josep “Pitu” Roca, who brilliantly pairs his siblings’ creations with 14 different wines. Sensible, humble and with a vast wine knowledge, he is capable of creating such emotions with just a glass of wine that the experience of eating at El Celler turns unforgettable. Unlike other restaurants at this level, wines are paired not only on the basis of the dishes served, but also on diners’ taste and wine preferences. Thus you can see a group of winelovers enjoying a 1986 bottle of a little-known Ribera del Duero producer such as Goyo García Viadero or a table of classic wine buffs drinking an old Rioja or Ribera vintage.

Pitu likes the "emotional impact" that old wines leave on people who taste them. He stores over 130 selections -mostly from Rioja- with vintages going back to 1914 as well as a few verticals such as Cvne, Marqués de Riscal, Pomal and Marqués de Murrieta. Besides Spanish classics, El Celler’s wine list —split in three volumes— spans all kinds of wines and regions of the world and includes 3,360 different wines.

It is not easy to secure a table at El Celler. Bookings are taken 11 months in advance and although there is a waiting list, cancellations are few and far between. It is not a restaurant to suit every pocket, but if budget allows, the experience is guaranteed to be unforgettable. Y.O.A.

In search of old Riojas (and III)
Uncorking 10 unusual wine presents
How can architecture and design help wine?
Wine and food pairing: is it an overrated practice?
“You don’t need to be a good taster to be a good sommelier”
Cosmic Vinyaters champions rare Cariñena Blanca in Empordà