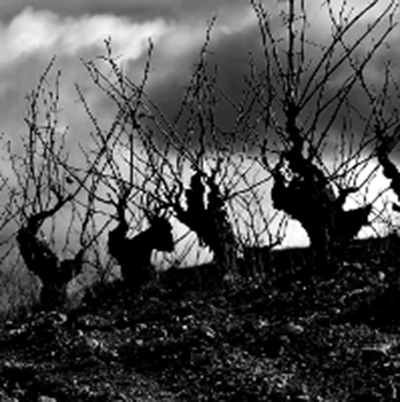 THIS PRODUCER IS NO LONGER IN BUSINESS

Although rather unknown, the project launched by producers Jorge Navascués and Carlos San Pedro is very exciting. Both are highly respected in their respective regions —Navascués is the winemaker at Pago de Aylés (Cariñena) and consults for several wineries in Aragón whereas San Pedro is behind Bodegas Pujanza in Laguardia (Rioja). In the early 2000s they met halfway from their respective bases to recover old garnachas planted in the Aranda river valley, in the town of Jarque del Moncayo (Zaragoza). The region, which is outside the limits of any appellation, has lost many traditional vineyards and the surface under vine has dropped drastically. The wines are sold under the VT Valdejalón designation.

Their nine hectares of vineyards, most of them north-facing, are mostly 50-60 year old bush vines plated at high altitude (800-900 metres) on decomposed black slate soils —a character that clearly appears in the wines. Yields rarely exceed half a kilo per vine. Bunches are destemmed, fermentation takes place in stainless steel tanks and the wines are aged in 225-litre French and American oak barrels.

The flagship wine is Mancuso (only 5,000-6,000 bottles, €44 in Spain): a 100% Grenache that undergoes malolactic fermentation in barrels and is aged for about 14 months in Allier French oak. Moncaíno de Mancuso (15,000 bottles, €14) is also a 100% Grenache but it is aged in French and American barrels for just 7 months. Mancuso is the name of a gold coin form Aragon which was first coined during the reign of Sancho Ramírez, while "moncaíno" is related to the Moncayo, the highest peak in the Iberian mountain range where some of the most distinctive Garnachas in Spain are found.

These wines —specially Mancuso— are full-bodied reds with plenty of character which manage to combine the warm slate notes with fresh balsamic nuances coming from the high altitude and the northern exposure of vineyards. Terroir-seekers will love the wines.