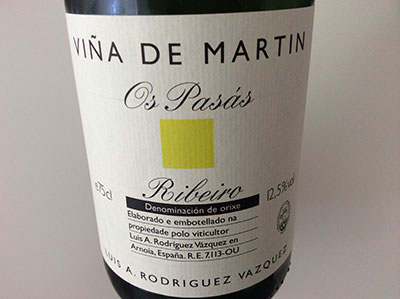 Luis Anxo is a winegrower and producer linked to the Arnoia valley, where he has 3.7 hectares that are worked as traditional terraces, or socalcos, and are divided into multiple plots. In this area, the classic Galician smallholding goes to unimaginable lengths. Just consider that the traditional measurement used here was the copelo, equal to 21 square metres (226 sq ft). He also has a 1.3-hectare property in Ribadavia. A mix of different varieties can be found on all his properties and plots.

His whites are mostly Treixadura, with some Albariño, Lado and Torrontés, which is the variety he considers to be least appealing. For the reds, he combines Brancellao, Caíño and his favourite, Ferrol. He only includes some Sousón and Garnacha Tintorera (Alicante Bouschet) in his basic red Eidos Ermos.

No herbicides or insecticides are used in the vineyard, although fungicides are, considering that mildew is his vines’ main enemy. He is reclaiming the viticulture practiced by his great-grandparents, compared to what is known as ‘the winegrowing degeneration’ of his parents’ and grandparents’ age.

For Luis Anxo, the Arnoia wines are the most closed and mineral of the appellation —he maintains that they take several years to express themselves. What is certain is that his Viñas de Martín benefit from bottle ageing and are far from the aromatic exuberance that is usually found in the more well-known Avia valley. Production is done individually, by properties and plots. His range includes several quality levels, and unlike other wineries that only focus on whites, he also works with reds (40% of production) throughout nearly his entire range of wines. This is the case with the most basic labels, designed for drinking sooner rather than later, which are marketed under the brand Eidos Ermos (around €11). In the mid-range are Viña de Martín Os Pasás and the red A Torna Dos Pasás (both around 15 €), both of which are produced in stainless steel. The white is aged on its lees for an additional year in steel, while the red is moved to 300-litre used barrels to age for a year.

The premium range comprises the white Viña de Martín Escolma and the red A Torna Dos Pasás Escolma (both around €29). The white is worked by property: each has its own barrel where it ferments and is then aged for just over a year in wood and several years in the bottle. The red is not produced every year and is also cask-aged for a year. A Teixa (around €18), the white from his Ribadavia vineyard, is fermented and aged in oval wooden vats, and is the winery’s only single-vineyard wine. Aging is always made in French oak.

In total, Luis Anxo scarcely produces 30,000 bottles, of which 20% are exported, mainly to the United States, where José Pastor acts as importer.