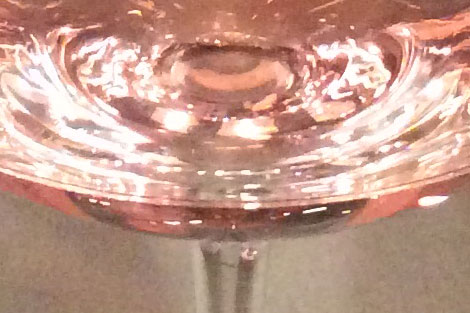 Is it time to praise outstanding rosés in Spain? Photo: Amaya Cervera.

A lighter shade of red is not necessarily better, but behind the new trend towards light-coloured rosés, some quality-conscious Spanish producers are trying to make serious wines in this style.

Rosé wines are undoubtedly making inroads in the world of wine. According to the International Organization of Vine and Wine (OIV), consumption of rosé wines increased by 20% between 2002 and 2014 to reach 22.7 million hectoliters (m hl). Rosé wines currently represent 30% of total still wines consumption in contrast with 17% in 2012.

Spain is the world’s second rosé producer with 5.5m hl and the leading exporter with 46.3% of total rosé exports in 2014 accounting for 4.53m hl. As you may have guessed, France is our best client —it buys as much as 2.7m hl, more than half of all Spanish rosé exports.

With wine consumption at depressingly low levels in Spain, rosés are no exception, yet the category is bustling and some really interesting wines have been released lately.

Murrieta: from barrel aging to pink

Marqués de Murrieta launching a rosé is quite a thing. The legendary Rioja producer has not tried to craft a new version of the old barrel-aged style they stopped making in 1987 (“too expensive to make”, says owner Vicente Cebrián). After three years of experimenting with Tempranillo, Viura and Garnacha, they have decided to rely on Mazuelo (Carignan). A high-acidity grape, it is blended with Tempranillo in Castillo Ygay, their top red. A single-varietal red Mazuelo was produced to celebrate the 150th anniversary of the cellar.

For this rosé, grapes are sourced from the highest part on the estate at 500m of altitude. During the presentation, winemaker María Vargas insisted on the colour (“pink, not salmon”) and said they had tested the tone to ensure that it remains virtually unchanged for at least three years. Grapes are macerated for three hours, and then the must is drained and fermented at 10ºC as if it were a white wine.

Combining fine floral and fruity aromas, Murrieta Primer Rosé 2015 displays great acidity, a well-defined palate and a nice structure. Only 5,000 bottles have been produced and it comes in a unique, custom-designed bottle. It will retail at around €30-32.

Working on the cool, high and very old vineyards of Atauta in the eastern end of Ribera del Duero, French winemaker Bertrand Sourdais pursues a certain degree of provocation in making just over 1,000 bottles of a single-vineyard premium rosé.

For Le Rosé de Antídoto (€33 the 2014 vintage at Ideavinos) he blends almost equal parts of Albillo and Tempranillo. Both of them are harvested at the same time, jointly pressed and fermented and aged in 500- or 600-litre barrels. Sourdais aims to express the chalky character of the soil with this really sapid wine (like umami) which also displays floral and aromatic herbs notes.

“I favour pressing to make rosés,” says Bertrand. “I don’t do macerations, let alone bleedings. The latter are quite useful to concentrate reds but are not a good way to make high quality rosés. We are lucky to have a warm, sunny climate in Spain, so we don’t need to pursue an opulent, ripe style. I look for delineated, clean, precise rosés”.

Ironically, Sourdais is not bothered about colour. As far as he is concerned, it’s just the result of a way of doing things but his wine serves as a model to understand two techniques increasingly used in rosé winemaking; direct pressing and mixing white and red grapes.

None of them are really new. In Champagne it is standard to press red grapes quickly (Pinot Noir and Pinot Meunier) to obtain blanc de noirs wines. Grape varieties also have an effect: Cabernet or Syrah for instance will result in darker wines than Tempranillo but the latter would still add more colour than Garnacha. The timing of the harvest is another key issue —early-picked grapes will result in a lighter colour than fully ripe grapes.

The new rosé Hacienda de Arínzano Tempranillo 2015 (€14 at the winery) from Navarra comes from vineyards with slightly higher than average yields. The grapes are quickly pressed to obtain a light, delicate wine with petals, pink grapefruit and lots of citrus aromas. It is part of the new range of wines made at the estate under the direction of Manuel Louzada, after he left Numanthia to manage SPI group’s wine division which includes the stunning Arínzano estate.

In Rioja, renowned winemaker Miguel Ángel de Gregorio bleeds Tempranillo grapes on the hopper to make his new rosé Finca Nueva 2015 (€5.90 at Vinissimus). In line with the spirit of this project, focused on fun, affordable wines, it retails at around €6 in Spain and follows the pale colour trend.

Blending white and red grapes has been common practice in Spain and this is how Muga produces their rosé (€7.60 the 2015 vintage at Vila Viniteca) in Rioja, which has been traditionally considered one of the most light-coloured in the appellation.

As winemaker Jorge Muga explains, the “claretes” (local name for rosés) made in the Najerilla and the Oja valleys are a blend of Garnacha and Viura. "Preventing wine from spoiling may be the origin of this tradition”, says Jorge. “It was preferable to transport must than grapes so, whenever possible, grapes were trodden in the field which also explains the existence of stone “lagares” in the vineyards themselves. Obviously, colour was not important at the time," he explains.

Boasting a long tradition of rosés, Muga currently works their rose right from the vineyard. “We look for just the opposite of reds,” says Jorge. “Garnacha is grown on north-facing sites, just on the other side of the valley; we try to shade the clusters and yields are not as strict as for reds; otherwise we wouldn’t be able to ripen the grapes.” Bunches are cooled down in refrigerated trucks for 4 to 8 hours before being crushed and pressed. Jorge says it is very important to ferment Tempranillo and Viura musts together: “Viura (representing around 30% of the blend) helps to balance out Garnacha’s oxidative tendency, contributes to open up the nose and results in a far more interesting palate,” explains.

A good deal of sophistication

UK, Mexico and the US have been traditional markets for this wine, but Jorge, along with many other producers, confirms the rising demand for sophisticatedly packaged rosés on the Spanish costas, particularly during the high tourist season, from Málaga to eastern Spain and the Balearic Islands. Having Lio’s sommelier (Ibiza’s most glamorous club) at Marqués de Murrieta’s press presentation in Madrid was proof of this.

The event took place at Kabuki Wellington, one of the finest Japanese restaurants in Spain. Sommelier Silvia García acknowledged not having a sole rosé on her wine list but said the likes of Murrieta’s Primer would be very welcomed in it.

Bertrand Sourdais is convinced that “there’s a second chance for quality rosés in Spain and a new niche can be found right now in the market.”
Strange as it may sound, I believe this new trend is partly due to the fact that colour has stopped being such a crucial issue. Happy as we are now with slightly oxidized whites, and pale, light-coloured reds, it is probably time to praise outstanding rosés.

Ten Spanish wines to discover in spring
The highs and lows of grape varieties in Spain
Garnacha, can a grape be sexy?
Spanish rosés: a vibrant and diverse selection

1 Comment(s)
Comment on this entry* *All comments will be moderated before being published: