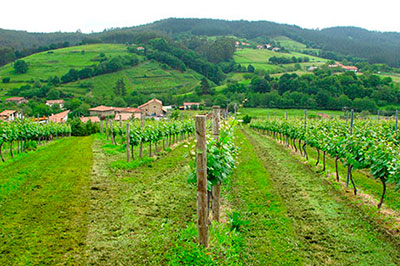 Itsasmendi has greatly contributed to improve the image of Basque txakoli and turn it into a quality white wine. A pioneer in growing international grapes like riesling and pinot noir or presenting their wines in a Bordeaux-type bottle instead of the traditional Rhein-type, they also produced the first sweet wine in the area and proved that txakoli can age beautifully.

The project started in Muskiz, where the seven Itsasmendi partners hired a winery and planted their first vineyards. Nowadays they grow 37 hectares throughout the province of Bizkaia. Almost 20 of them are to be found in the area of Uribe Kosta in villages like Lemoiz, Munguía or Gorliz; another 15 hectares are grown in Urdaibai, a natural enclave around the Gernika estuary which has been declared Biosphere Reserve; the rest are in the areas of Durangoaldea and Enkarterri.

“Geological and microclimatic diversity are amazing; that is why we need up tp 30 days to do the picking of the grapes some years,” says co-founder and technical director Garikoitz Ríos. Plots can also behave in different ways in every new vintage. Itsasmendi has established its own classification according to ripening times in the first, second or third week, with high quality performers in all three stages. Grapes harvested on the first week of ripening in villages like Leioa or Erandio bring structure; the second week, usually in places like Gernika and Muxika, makes for elegance and complexity. Finally, vineyards harvested on the third week and located in elevated areas of Morga and Durango plus a specific west-facing plot by the sea in Lemoiz, are a reliable source of acidity.

Total production stands at around 250,000 bottles. The fruity, young Itsasmendi (€10) is the entry-level white, while the deeper and far more complex Itsasmendi 7 (€14, around 60,000 bottles) is their star wine. It includes between 18% and 20% of Riesling in the blend and can develop nicely over time. A single-vineyard wine between 2003 and 2007, it is currently made with selected grapes coming from different plots that ferment separately and age with their lees. A classification of vineyards by areas and sites has resulted into a limited range of single-vineyard wines starting in the 2016 vintage. The wines, made in small quantities ranging from 600 to 1,000 bottles, vary in every new vintage and have been released with the number of the plot added to 7 as in 7.1 or 7.7 but the idea is to create a new range called Paradisoak (paradises) from the 2019 vintage onwards.

Itsasmendi Artizar (€33, around 2,000 bottles) aims to capture a peculiar or curious situation in a specific vintage, thus the wine usually comes from different vineyards and can follow different styles or winemaking philosophies, even change the packaging (it has been made in Rhin and Bourgudy-shaped bottles for instance)

The range is completed with Urezti Late Harvest (around €15 per 375 ml. bottle) the first sweet wine made in the appellation and the red Eklipse (€18) a singular blend of Pinot Noir and Hondarrabi Beltza. A recent addition is Batberri (less than 3,000 bottles, €13), a carbonic maceration white which has a bigger focus on skin-contact and feels a little wilder now.

In 2019, Itsasmendi achieved its dream of leaving behind its old facilities at an industrial park in Gernika and build a spacious new winery at a natural area surrounded by vineyards, woods and a small chapel. A notable addition is a new set of aging vessels including foudres, concrete, egg-shaped tanks or amphorae to explore the full potential of their grapes.

The essential guide to Spain’s sweet wines
Txakoli comes of age
Txakoli: a guide to producers and wines
The metamorphosis of txakoli