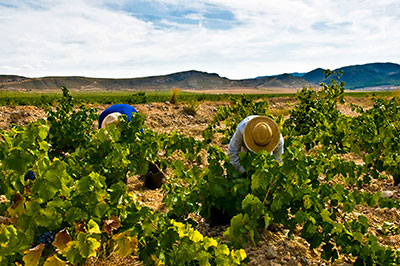 The Gil family celebrated its 100th anniversary in 2016. It was the saga’s great-grandfather Juan Gil Jiménez who decided to leave his job as a stone cutter and try his hand at making wine in Jumilla.

In an area where bulk wine was the standard until not long ago, the fourth generation made a strong commitment to craft high quality reds at Bodegas El Nido. In association with well-known Australian winemaker Chris Ringland, its two wines Clío (70% Monastrell, 30% Cabernet Sauvignon, around €35 in Spain) and El Nido (70% Cabernet Sauvignon, 30% Monastrell, €115) gained international recognition from the very moment they were released.

It’s impressive to see the progression of such a large wine group, considering its humble origins and the area where they started. Aside from Jumilla, where they own Juan Gil and Bodegas El Nido, the Gil Family Estates is also present in Montsant (Can Blau), Priorat (Bluegrey), Calatayud (Ateca), Campo de Borja (Morca), Almansa (Atalaya), Castilla y León (Tridente and Shaya, the latter under the Rueda appellation) and Rías Baixas (Lagar de Condesa). They have recently expanded to Rioja where they have built a winery called Rosario Vera after buying vineyards in Rioja Alta and Rioja Alavesa.

The group comprises over 1,400 hectares of own vineyards with production exceeding 8m bottles. Up to 75% of the wines are exported to over 40 countries. The fourth generation’s nine siblings all have a stake in the company headed by Miguel and Ángel Gil.

The group’s strategy is based on offering best value wines and the creation of economies of scale to be more competitive. Wine tours will be available in Jumilla in the near future and they may extend them to other wineries.

Their wine portfolio usually includes an entry-level wine followed by a top value wine in the mid-range category and a premium wine.

Garnacha Tintorera (Alicante Bouschet) is the main variety in Almansa, to the north of Jumilla. Monastrell is part of the blend in the entry-level Laya (30%, €5) and in La Atalaya del Camino (15%, €10,5) but the top Alaya Tierra (€22) is a wild, single-varietal Tintorera.

Moving north along the Mediterranean, in Catalonia, the family produces red wines in Montsant from Garnacha, Cariñena and Syrah planted on schist, clay and chalky soils respectively. The same blend with varied percentages is used for Blau (€7.5), Can Blau (€11) and Mas de Can Blau (€32). They are now present in Priorat where they have launched just one wine for the time being. It is called Bluegrey and it is a blend of Garnacha, Cariñena and Cabernet Sauvignon which retails for €14 in Spain.

Heading inland to the west, in Aragón, the focus is on single-varietal Garnacha reds. All three Honoro Vera (€5.5), Atteca (€11) and Atteca Armas (€32) come from Calatayud. In Atteca Armas, grapes are sourced from the oldest vineyards in the area. The range in Campo de Borja is more ambituous: two red wines have been released so far with 15 and 20 months of oak aging retailing at €15 (Godina) and €27 (Morca) respectively.

The family runs two projects in Castilla y León. Vineyards in Segovia, with distinctive sandy soils and a relatively high concentration of old vines, provide the grapes for the three Verdejo wines made in Rueda: the entry-level Arindo (€6.5), Shaya (€9) and barrel-fermented Shaya Habis (€22), which is made from the oldest bush vines in the area.

Further north in Zamora, the group has a winery to work the grapes from nearby vineyards which are later sold under the VT Castilla y León designation. While Tridente Tempranillo (€11.5) grapes are sourced from the villages of El Pego in Toro and nearby Villanueba de Campeán, Tridente Mencía (€9.5) comes from Cacabelos in Bierzo and Tridente Picudo (€21) from other areas in León. There is also the entry-level Tempranillo Entresuelos (€7) and the top Rejón (€35) which bears the name of a 130-year old Tempranillo plot in El Pego.

The most Atlantic-influenced project is based in Rías Baixas. Lagar da Condesa (€12.5) Albariño comes from the Salnés valley.

Rioja is the latest region where the Gil group has settled. Named after Rosario Vera, the matriarch of the family, grapes are sourced from small 15- to 60-year-old plots and are processed at their new winemaking facilities in Laguardia (Rioja Alavesa), The first wine on the market is Honoro Vera (€5.5 in Spain), a young single-varietal Tempranillo. A small part of the wine is briefly aged in barrels.

The Gil family has made a name for themselves thanks to their round, ripe reds with soft textures and easy to drink style. Their ultra-premium range tend to be powerful but without losing that velvety character, following the style devised by Chris Ringland for El Nido.