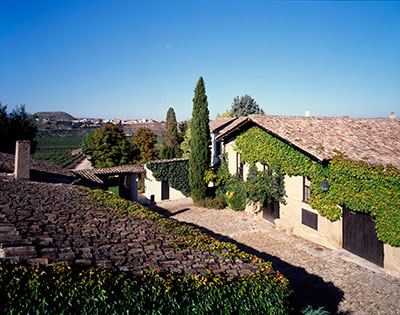 The relationship with the Cvne group comes from long ago, but it has been intensified since the end of 2013, when the legendary Haro winery took control of 95% of the company.

A pioneer of the single vineyard wine concept in Rioja, Viñedos del Contino was born in 1973 as a partnership between the Pérez Villota family, owners of Finca San Rafael (Rioja Alavesa) and a group of Cvne directors led by Jose A. Madrazo and Real de Asúa. The idea of making wine from a single terroir was unheard of in Rioja, where mixing grapes from different areas in the region was the norm. With this attitude in mind (and taking into account the quality of its wines since its early days) Contino must be seen as one of the instigators of the Rioja wine revolution and, together with Remelluri, as the leading advocate of the château concept in the DO.

The estate covers 62 hectares under vine on pebble soils in a meander of the Ebro river. Bunches ripen well on this location and result in wines with power, structure and great fruit expression which go well with Cvne's historical profile. Winemaker Jesús Madrazo, son of one of the project's founders, looked after the wines for over a decade. In 2017 the Aragonese producer and consultant Jorge Navascués took over.

All Contino reds -whose labels feature the image of Saint Gregory, protector of the vineyards- include Graciano in the blend. In fact, it was the first winery in Rioja to produce a single varietal wine with this complicated but tremendously lively and long-lasting variety which gives its best when it is fully matured (if it fails to ripen it might turn austere, herbaceous and extremely acidic).

The Reserva (around €24 in Spain) is Contino's flagship wine and bestseller. With a good aging potential, it exemplifies a timeless Rioja, with intensity, balance and length.

Contino Viña del Olivo (around €60), its top wine, is rather impressive and stands as one of the greatest modern Riojas. It a blend of very ripe grapes from old Tempranillo vines planted around an ancient olive tree and a particulary intense and vibrant Graciano. The percentage of Graciano varies according to the characteristics of the harvest and the needs to liven up the Tempranillo in the blend.

The winery has recently launched a rosé, a Garnacha single varietal and a white wine which is fermented in stainless steel and aged in large casks (350 to 500 litres), with no malolactic fermentation. It follows old-age vinification styles but with a renewed air. The blend is interesting too: it includes Viura, 20% Garnacha Blanca and 10% Malvasia from old vines planted in 1930. Wines can be purchased online.

Spain’s best somms reveal their top Christmas wines
Grenache soils in Spain
Five top Riojas to enjoy this Christmas –plus a few affordable alternatives
A walk through 21st century Cvne with Víctor Urrutia
Rioja in the 21st century: styles and categories of wine