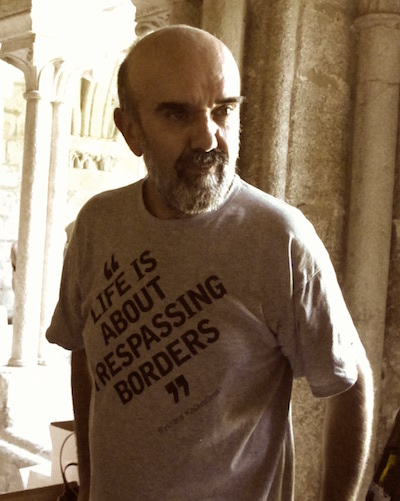 A sailing boat was the reason that drove Alberto Nanclares to leave his job as an economist in Madrid and settle in Rías Baixas in the early 1990s. Back then, he had no intention to work in wine but he gradually started to tend the vineyard surrounding his house in Castrelo, with a view of the Ría de Arousa. In 1997 he converted his garage into a small winery and started to make his own Albariño; by 2001 he purchased additional vineyards in the Salnés valley and officially became a winegrower and producer.

He now grows five hectares of Albariño in Pradenda, Cambados and Castrelo. As demand for his wines increased, particularly in the US, Alberto Nanclares decided in August 2015 to form a partnership with Silvia Prieto, a young winemaker with whom he shares the work both in the vineyard and on the commercial side. With this partnership, Nanclares ensures that his wines continue once he retires in a few years’ time.

In Rias Baixas they only grow Albariño vines, planted mostly in sandy soils with some clay. Unlike other producers in the area, who complain about how hard it is to rent or purchase vineyards, Nanclares says he has never had any trouble finding additional land.

Work in the winery and on the vineyards follows the same principles: minimal intervention, separate fermentations with indigenous, natural yeasts, moderate use of SO2 and bottling without clarification in order to preserve the wines’ character.

Their range of whites feature the many expressions of Albariño in their vineyards and starts with Tempus Vivendi (1,220 bottles, around €12) and Dandelion (2,215 bottles) followed by Nanclares (2,734 bottles, €13.50), which is sourced from five different vineyards and is fermented in stainless steel and 2,000-litre French oak casks. Paraje Mina usually comes from the vines surrounding the winery but the wine was not been released on the 2014 vintage because quality failed to match expectations. Soverribas (1,294 bottles, €18) is made from grapes in the Manzaniña vineyards planted with 35-year-old vines and fermented in a large oak cask.

Coccinella (471 bottles, €25) and Crisopa (448 bottles, €26) are made in partnership with their friend and sommelier José Luis Aragunde, owner of Ribeira de Fefiñans wine bar in Cambados. The first wine is sourced from hundred-year-old vines and is bottled on a fruit day, following biodynamic principles, whereas Crisopa is made in the traditional way —grapes are foot treaded, with 40% of whole clusters and fermented with its skins. It is one of those wines that you either love it or hate it —the Rías Baixas appellation disqualified it arguing lack of quality whereas Nanclares’ US importer liked it so much that he bought most of the bottles.

In Ribeira Sacra, Nanclares & Prieto make two reds in the traditional way, foot-treading whole cluster bunches: Miñato da Raña (563 bottles, €27.95), released on the 2014 vintage, is a blend of Mencía and Garnacha Tintorera whereas Penapedre, which has not yet reached the market, was made in 2015 for the first time and comes from 100-year-old organic vines. They make another red in Rivadabia (Ribeiro) following the same traditional winemaking practices. 2015 will be the first vintage of this blend —Brancellao and Caíño Longo from the Quinta Alto do Coto vineyard and Sousón, Carabuñeira, Ferrón and Merenzao from Quinta Costa do Beliño). Grapes are foot-trodden on traditional 80-year-old chestnut barrels and the wine is later aged on its lees.

For the first time and under the initiative of Silvia Prieto, this past vintage they picked grapes in the Paraje Mina vineyard which are usually left on the vine. These Albariño grapes, which had botrytis and excellent levels of alcohol, acidity and sugar, have become a one-off wine called Cinerea which has recently been released (600 bottles, €23).

Nanclares y Prieto: juggling with the many faces of Albariño
Selling Spanish wine in the US: It’s the “back story”, stupid