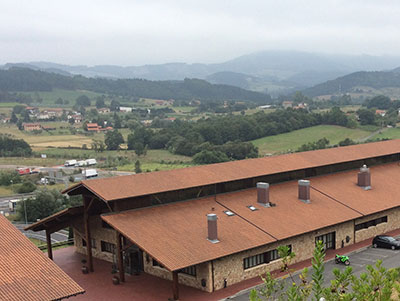 Very few wine producers around the world can boast about having a 3 Michelin-starred restaurant as neighbour but this is the case at Gorka Izaguirre, in the village of Larrabetzu (Basque Country), just 20 kilometres from Bilbao. Producer Gorka Izagirre along with his nephew Bertol and renowned chef Eneko Atxa, run a family business which includes ample Txakoli winemaking facilities, a state-of-the-art restaurant and an informal bistro.

Commanding great views over the Txorierri valley, the winery is a top spot for plane spotters given the proximity of Bilbao airport, barely a mile away. While the Michelin-starred restaurant boasts an impressive cantilevered glass dining room as well as its own greenhouse, the cellar below resembles in its façade the style of Basque traditional farmhouses. Once inside there is no place for romanticism —presses, macerators (all high quality grapes are sent there) and some 60 stainless steel tanks to ferment plots separately occupy the space.

The beginning of this project started with Aretxondo, a small Txakoli business set up by Gorka Izagirre’s technical director, José Ramón Calvo, and his aunt and uncle in the village of Mungia. The current facilities were built in 2005 and provide capacity for over half million litres of wine. They are the largest in the entire Bizkaiko Txakolina appellation —production is highly atomized in the area and wine is a secondary occupation for many producers, which is why they also provide winemaking and storage services for third parties. Total production stands at around 270,000 bottles but they aim to reach 400,000 in the near future.

All vineyards are their own or have been rented in order to have full control over them. Altogether they farm 40 hectares located in different villages like Larrabetzu, Euba, Amorebieta-Etxano, Mungia (the closest to the sea) or Dima. Two white varieties are grown: Hondarrabi Zuri (the Basque name for Courbu Blanc) and Hondarrabi Zerratia (Petit Courbu) which is also locally known as Small-Leaf Hondarrabi.

Winemaker José Ramón Calvo favours a south-east exposure to take full advantage of the first sun rays, which dry out the skins of the grapes and keep humidity away. In his opinion, a good exposure is far more important than being close to the sea. He also looks for land at high altitude in open, well-aerated areas.

Atlantic climate and rain go hand in hand. With 1,000-1,300mm annual rainfall, organic growing can get really difficult. Contact herbicides and treatments against mildew, which is endemic in the area, are common practices, yet they avoid spraying the vines within 25-30 days of picking. Green harvesting helps to expose bunches to the sun. Grapes are usually picked in October which means that Gorka Izagirre’s whites usually reach 12.5% vol., above traditional txakoli. They use selected yeasts, which are as neutral as possible, and all the winemaking processes are handled in a cool, inert atmosphere thanks to the use of dry ice.

The flagship wine is the young Gorka Izagirre (200,000 bottles, around €9 in Spain), a fresh, sharp and consistent txakoli. The G22 (45,000 bottles, €12) undergoes some extra aging with its lees in stainless steel tanks and displays weight as well as evocative floral notes. 42 by Eneko Atxa (7,500 bottles) was named after the 42 months that the first 2010 vintage spent in barrel, but from the 2015 vintage it is fermented and aged in a 5,000l wooden vat. Finally, the late harvest Gorka Izagirre Arima (4,000 bottles of 50 cl., €18) is made only in the best vintages. The acidity and sweetness of the 2015, which is still aging in the cellar, is very well balanced, following the style of Central European sweet wines.

The Hamaiketako Experience tour takes visitors through the winery tasting four wines paired with pintxos. The wines can be bought at Gorka Izagirre’s online store .

Txakoli: a guide to producers and wines
The metamorphosis of txakoli