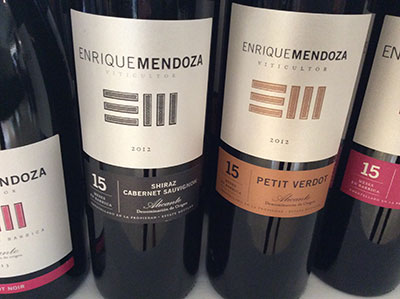 The Mendoza family has been making quality wines in Alicante since the eighties. They chose foreign varieties to produce their reds, as did many producers based on lesser known regions than Rioja or Ribera del Duero. The Mendozas were among the first viticultors in Spain to work with Syrah, but they also planted Merlot, Cabernet Sauvignon, Pinot Noir and Petit Verdot. They only allowed for one local variety – the sweet Muscats that are so typical from La Marina coastal area. In fact, the aging cellar is located in Alfàs del Pi, just six kilometres north of touristy Benidorm. Vinification is carried out at Finca Chaconero in Villena, a one-hour drive further inland, where the vineyards are planted.

The winery's reputation has been built on labels such as Reserva Cabernet Shiraz (14€) or Shiraz (14€), both inspired in Australia although solidly Mediterranean in character. This notoriety is specially based on a Santa Rosa (€22 in Spain, originally a blend of Cabernet, Merlot and Syrah, which now includes 35% of Monastrell), virtually the only Alicante red which consistently managed to be among the top wines in Spain in the nineties, thanks to its elegance and balance.

In recent years, efforts have shifted towards the native Monastrell (Mourvèdre) variety. The result is red wines like the entry-level La Tremenda, mainly sold abroad, and two outstanding single-vineyard wines. Estrecho (€24) is a fragrant, expressive red sourced from old bush vines planted on poor sandy soils in Paraje de la Pipa (Villena) at an elevation of 700m. Grapes for the distinctly mineral Las Quebradas (€22) are sourced form a plot planted at 500m on poor, stony, limestone soils resulting in high ripeness and a warmer expression of Monastrell.

A sweet limited-production red is made from over-ripe grapes which have been left on the vine and are highly concentrated and intense. This style is radically different from the fragrant, floral and seductive Moscatel de la Marina (€9), which is fortified with grape spirit or Moscatel de Mendoza (€12) which includes the complexity from its barrel aging.

The winery is committed to spread wine culture and organises wine tourism events and activities. It has recently launched Mendoza's Experiences, three consecutive days of activities in the winery at a very affordable price. A more exclusive package is the Premium Experience, where wine lovers can create their own wine in one day accompanied by winemaker Pepe Mendoza.