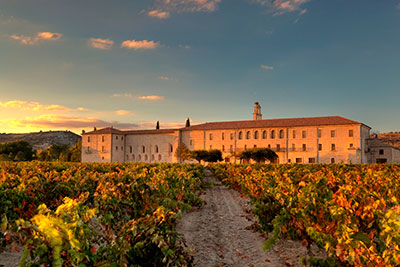 Located in Sardón de Duero, just outside the boundaries of Ribera del Duero (although some areas lie within the appellation), Santa María de Retuerta is one of the historical estates in the region. Its beautiful abbey is a reminder of a winemaking tradition which faded and even disappeared. In 1996, the financial support of Novartis, the pharmaceutical group, helped to launch an ambitious project which now has 210 hectares under vine in the 700-hectare estate.

French winemaker Pascal Debeck, who supervised plantings and production of the first vintages, continues to work for Abadía Retuerta as a consultant. However, the day-to-day work has long been in the hands of Ángel Anocíbar, who has skillfully returned the estate to its old winemaking glory.

Although Tempranillo is the dominant variety, French varieties such as Cabernet Sauvignon, Merlot, Syrah and Petit Verdot are also meticulously planted in the slopes beneath the Douro river. As vinification is gravity-led, the winery uses small crane-operated tanks and each pago (parcel) is worked separately. Aging is all done in French oak.

Selección Especial (around €29 in Spain and 16 months' aging) is the flagship wine. Production is just under half a million bottles and is made with around 75% Tempranillo, Cabernet Sauvignon and a small percentage of Syrah and/or Merlot. It is one of the leading reds in the area, at times even better than other Riberas in its category. The winery has traditionally focused on consolidating its brand and get the best out of their location within the so-called "Golden Mile" where illustrious wineries such as Vega Sicilia or Pingus are based. Since 2022 it has its own DOP Vino de Pago.

The single vineyard reds all retail around €70 and their production reaches around 5,000 bottles. Tempranillo-based Pago Negralada and Pago Valdebellón, made with Cabernet Sauvignon, are their more famous labels, but Pago Garduña (Syrah) and the Petit Verdot -less than 1,000 bottles and over €100- are both worth trying. Given that their wines started being labelled under the seal of VT Castilla y León, they grew from the very beginning grape varieties that were not allowed under the DO Ribera del Duero. This freedom allowed them to start producing some years ago Le Domaine (€30, 13,000 bottles), a novel Bordelais style barrel-fermented white blend of Sauvignon Blanc (60%) and Verdejo which is in stark contrast to the wines produced by its expert Rueda neighbours. Over the last few years the focus has been on growing grape varieties capable of fighing climate change like Garnacha, Graciano or Malbec. Thus they have relaunched the brand Cuvée Palomar to show this work starting with a blend of 40% Garnacha, 40% Tempranillo, 20% Malbec in the 2018 vintage. Teh wine reatils at around €58 in Spain.

The beautifully restored abbey houses a 12th century Romanesque church and a luxurious five-star hotel called Le Domaine. It belongs to the Relais & Châteaux network and hosts the Michelin-starred restaurant Refectorio, the Santuario Spa and an increasingly growing art collection. While the hotel is at the centre of a comprehensive wine tourism offer, the winery has its own wine store and the wine bar Calicata.

Find the wines at the winery's online shop. For inquiries concerning the USA, contact Europvin.

31 wines to try in August
Weddings among barrels
Do you need a separate glass for each wine?
Severe frost will mark the 2017 vintage in northern Spain
Abadía Retuerta: in search of lost time
Visiting Abadía Retuerta with Ángel Anocíbar
Wine tourism opportunities in the summer of the pandemic