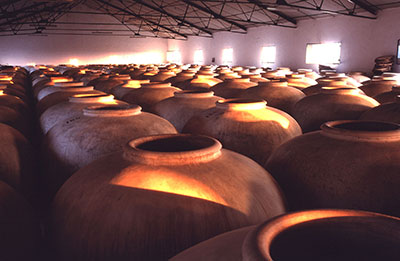 Founded in 1729 by Don Diego de Alvear y Escalera, it is one of the oldest wineries in Spain and is currently managed by the seventh and eighth generation of the Alvear family. Production facilities are spread across Lagar de las Puentes, in the mountains of Sierra de Montilla – a two hours' drive north east of the sherry capital Jerez and with the same chalky white soils– and the so called Casa Central, a building complex spread across 60,000 m2 in the town of Montilla. Almost all of the 6,000 aging butts in the winery – each holding between 500 to 600 litres– rest at this larger location where the oldest soleras (a fractional blending system) are stored at the 18th century Bodega de la Casa (House cellar).

The wines come from 150 hectares of family-owned Pedro Ximénez vineyards and from grapes purchased from 200 hectares controlled by local growers. Most of the current brands and brandies date from the early 20th century, under the management of Francisco de Alvear, count of Cortina, who oversaw the acquisition of a large number of vineyards and the expansion of the winery. The iconic C.B. Fino brand precedes this time. It goes back to Carlos Billanueva, who was an assistant to Diego de Alvear y Ponce de León, an army officer who defended Cádiz against the French. Billanueva, who eventually became his right-hand man and winemaker, used to mark the best butts with his initials.

Throughout its long history, the Alvear family has always been in charge of the winery. Illustrious names such as Sabina de Alvear y Ward, member of the English branch of the family, opened the UK market in the 19th century and the winery welcomed renowned visitors such as empress Eugenia de Montijo, wife of Napoleon III, or Prosper Merimée, author of Carmen, which inspired the famous opera with the same name.

The wines are made from Pedro Ximénez, the dominant white grape in this warm and sunny region which is harvested in August and has great sugar concentration potential. This means that there is no need to add neutral spirit to Fino and when grapes are dried in the sun, it can produce some of the most dense and sticky wines in the world, known as PX.

Alvear produces brandies, vermouth, vinegars, dry whites and specially sweet and generoso wines (Finos, Amontillados and Olorosos). Its range of Finos includes C.B. (five years' ageing and around €5.5), Fino en Rama (around three years' ageing and €11) and the benchmark Fino Capataz Solera de la Casa, a 12-year-old Fino that is almost on the verge of becoming an Amontillado.

Fino Capataz is part of Alvear’s premium range which also includes the Amontillado Carlos VII (over 20 years' ageing, €18) and Asunción Oloroso Abocado, aged for at least 25 years (€18), plus the recently released Palo Cortado Nº 7 (€24) and Oloroso Catón (€21), both with 20 years' ageing. All these wines are sold in an elegant, classically styled packaging.

The notable sweet PX range starts with the young PX de Añada (€10), an Alvear invention. This style, in which wines are statically aged, in contrast with the traditional solera system, continues with the complex Dulce Viejo (vintage-dated and over six years' ageing, €27) and has finally resulted in a “sacristía” range featuring a broad spectrum of vintages with retail prices ranging between €20 and €45. In contrast, the widely available PX 1927 (€13) is aged on a solera system.

Alvear has also released occasional bottlings of extremely old wines like the legendary PX Solera 1830 (€90). Sold in tiny amounts, it shows what a wonderfully old PX is capable of in terms of complexity and finesse. Similar releases include the very old Amontillado Solera Fundación (€100) from ancient family soleras and the extremely concentrated Abuelo Diego, a rare Palo Cortado (this style is more popular in the Sherry Triangle).

In recent years, efforts have been directed at developing a new range of terroir-driven wines in line with the new wave of unfortified Palominos thriving in Jerez. Envínate worked for Alvear as consultants in this project which initially sought to highlight the marked differences in elevation and exposure and the fascinating tinajas (cement jars) still in use at Lagar de las Puentes in Sierra de Montilla.

The result was the Tres Miradas range, featuring a village wine (around €12.5, 25,000 bottles) and several single-vineyard whites (La Viña de Antoñín, El Garrotal or Cerro Macho) with retail prices ranging from €14 to €20. In the current second stage, now under the guidance of Ramiro Ibáñez (Cota 45), cask fermentation and ageing under flor have been introduced. This not only adds extra complexity and depth, but also helps to enhance each terroir. The first 2019 vintage releases include Viña de Antoñín, Cerro Franco and Cerro Macho (all of them around €2 in Spain).

There are daily tours of the winery in four languages (Spanish, English, French and German). Tasting experiences for Montilla-Moriles wine beginners are also on offer as well as Las Llares, an in-house restaurant where visitors can try some tapas and wines.

All the wines can be bought at Alvear’s online store.

Southern treasures (II): Pedro Ximénez
The essential guide to Spain’s sweet wines
Alvear and Envínate: a winning alliance in the heart of Andalucía
Twenty unforgettable wines we tasted at Vinoble
Join us at our party in Lavinia Madrid!
The best pictures from the #LaviniaSWL party
Montilla-Moriles whites: a renewed vision of terroir
The human factor in Sherry and Montilla, by Willy Pérez and Ramiro Ibáñez
Tasting with five Masters of Wine and other spring highlights