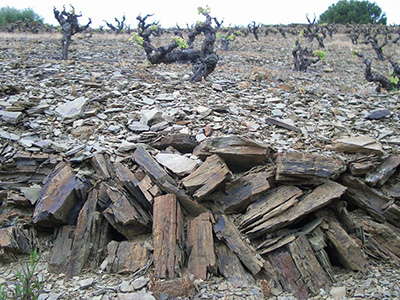 Launched in the mid 2000, this winery based in Torroja del Priorat revolutionised the working methods of this rugged appellation and anticipated some of the current trends in this Catalan region. Since then, Terroir al Limit has gone from being a tiny project crafting 10,000 bottles divided in five different wines to produce 100,000 bottles within an expanded range and a new focus on white wines.

The project is the brainchild of South African producer Eben Sadie -maker of Columella-, German businessman Dominik A. Huber and local grower Jaume Sabaté. Sadie and Huber had both previously dabbled in the area, but the new partnership encouraged a new vision and a different approach in the cellar.

French viticulture methods were put in practice on the vineyard and wines were divided into village wines (anticipating themselves to the region's official subdivision and the vi de la vila category), vi de coster (literally slope wines or Premier Cru) and vi d'altura, which is be the equivalent of a Grand Cru. Their approach to winemaking includes a preference for Carignan and Garnacha, the latter ideally sourced from soils other than slate; avoidance of overripe grapes and early harvests; fermentation with stems (which are removed before it is completed) in open plastic vats and minimum use of oak, preferably large foudres.

Nowadays, Terroir al Limit is just owned by two partners. Eben Sadie bowed out due to his commitments in South Africa, where he currently runs two wineries. The expensive portfolio starts with the white Terra de Cuques (€30, 90% Pedro Ximénez from clay soils in El Lloar and 10% Muscat from schist soils in Porrera aged for 10 months in concrete tanks) and the aromatic rather than structured red Vi de Vila (village wine) de Torroja (€29). With the exception of oak-aged Pedra de Guix, made with destemmed grapes, whites follow the same winemaking principles as the reds: grapes are fermented with their skins and stalks for around 10 days and they are pressed before fermentation ends.

Further experimentation with whites has led to two single-varietal, limited production wines: a fine Muscat (slightly over 1,000 bottles) marked by evocative Mediterranean herbs and the sapid and firmer Cartoixà Xarel.lo (around 600 bottles). All the whites are perfect to pair with food –being a passionate food lover Dominik always tries to make whites than can be enjoyed with a good meal. In fact the Roc d’Aubaga rosé (€36, 1,200 bottles) is almost entirely made with white grapes (Garnacha Blanca, Garnacha Gris and only 5% of Garnacha Tinta) and follows the same winemaking style of his whites.

He has launched a more affordable range of regional wines after renting the old Torroja cooperative. Dominik has found inspiration in the bottlings that used to be made by Tarragona’s La Unión cooperative prior to the arrival of René Barbier, José Luis Pérez, Álvaro Palacios and the people who pioneered modern priorats in the eighties. According to Dominik, back then grapes were sourced form Priorat and labels displayed the names of the region’s nine historic villages. Hence the name Terroir Historic for this new range. It includes a white and a red, both of them fermented with stems and aged in the cooperative’s cement tanks. Purposely rustic in style, retail prices stand at around €17 in Spain. Production ranges between 15,000 and 20,000 bottles but volumes are expected to grow progressively.

In October, Terroir al Limit holds its own harvest party where wines are served along with others from visiting wineries from other countries.

Priorat: is it all about terroir?
Our red -and white- picks from Priorat
Grenache soils in Spain
Copenhagen champions natural wines from Spain
The increasing diversity of reds in Priorat
Garnacha, can a grape be sexy?
Priorat whites: a tiny but appealing category