1 and 2. Sake is a beverage made from fermented rice meant to be enjoyed with food. 3, 4, 5 and 6. Sake production at Urakasumi. 7. Pablo Alomar, a leading sake expert in Spain. 8. Labels. Photo credits: Shuwa Shuwa and Salvioni & Alomar

Sake is a beverage made from fermented rice with a thousand-year-old-history. Although part of the Japanese culinary tradition, which is widely accepted in Spain, sake has not yet won the hearts of the country’s wine lovers. To begin with, many still think that sake is a distilled drink to be enjoyed as a digestif at the end of a meal. Others drink sake only with Japanese food as part of the folklore and cultural experience of eating at a themed restaurant.

But sake is meant for all kinds of food and situations – it encapsulates as no other the nature of the Japanese people. Making sake requires laborious, complex, painstaking work -the final result is an expression of the will and determination of the tōji or master brewer.

Sake does not attempt to impress or shock, but to complement, enhance and round off the flavour of food. It eschews grandiose descriptions, instead it seeks subtlety, perfection and the satisfaction of the drinker. Being free of additives and preservatives, sake brings a sense of wellbeing to body and soul and can be sipped at different temperatures. It is also a social drink, incorporating hospitality and courtesy towards others as drinking rituals.

Sake, as we know it today, is barely 40 years old. The premium category, which accounts for 20% to 25% of Japan’s total production and is the bulk of what is sold in Europe, has evolved very rapidly in recent years incorporating new rice varieties, yeasts and wine-related notions such as terroir.

Koji-kin is at the heart of sake

A drink that is somewhere between wine and beer, sake is somewhat unclassifiable. It is not a rice wine -unlike grapes, rice grains cannot be directly fermented- and it requires an additional process to convert starch into sugar. Sake doesn’t resemble beer either because polishing the rice involves removing the outer layers of the grains hence it can’t be malted nor produce its own enzymes. Here is where the star ingredient to make sake, the koji mould or koji-kin, comes in.

The task of this mould is to carry out the saccharification of polished rice by providing enzymes that convert starch into fermentable sugars. Koji-kin dissemination takes place in a special room and is one of the most laborious tasks in the entire production process. In the space of two days, the rice must be moved into new containers several times and kept at the right temperature and humidity. To ensure the desired result, sleepless shifts to stir the rice may be necessary. This process has to be repeated up to four times with each batch. Fermentation, aromas, body and the enzyme activity that produces the much-coveted umami flavour depend on the koji-kin. It usually takes over eight months from the time the rice is polished until a bottle leaves the brewery. The production process alone can require more than nine weeks, during which unique techniques such as multiple parallel fermentation and san-dan shikomi -a kind of yeast starter- are applied.

The brewer master and the concept of terroir

In the world of sake, the tōji is the equivalent of the winemaker. Some say that with sufficient experience and talent, it is possible to brew virtually all kinds of sake anywhere in Japan and with all types of rice and water. The mastery of these professionals and their control of temperature, humidity, interaction between ingredients and timing of each stage may produce amazing results. This is because the vast majority of premium sakes on the market are artisanal. The kurabito (brewery workers) monitor every stage. They check the consistency of the steamed rice with their hands, measure hydration times with a stopwatch, stir the yeast starter with paddles and massage the koji. Tōjis put all their heart and energy into the production of sake. They are the custodians of their communities’ tradition and of the ancestral knowledge of their breweries, some of which have been around for centuries.

This raises the question of whether there is such a thing as terroir in sake. If a tōji can produce any type of sake and flavour profile regardless of location, could we choose a sake on the basis of its origin? Does it make sense to talk about appellations?

Sake regulations allow to buy rice, koji and yeasts anywhere in Japan. The sole local ingredient is water, which would be extremely difficult and expensive to transport since at least 30 litres are needed per kilo of rice. Water hardness is a key element as it has an impact on the body, acidity, dryness and aromas of sake. Whereas hard water from the region of Nada-Gogō in Hyōgo produces dry, full-bodied sakes with high acidity and little aroma, soft water from Hiroshima results in smoother, lighter, more aromatic and slightly sweet sakes. Given that water leaves a strong mark in sake, can we talk about terroir?

Traditionally, sakes were the result of the ingredients available nearby, the type of food they would be paired with, and the skills and knowledge of the tōjis, who were grouped into local guilds. When premium sake with higher polishing ratios emerged, breweries began to source the ingredients they needed to make aromatic, light and elegant sakes from all over the country -sakes that were no longer indigenous and did not reflect the local culture, history and cuisine. Intended to be judged in competitions, they sought perfection and uniformity rather than distinction.

In recent years, however, some regions are recovering their distinctive features in order to build an identity of their own and offer a wider choice to consumers. Whichever the case, sakes with lower rice polishing ratio are better at expressing singularities.

The influence of wine and western markets have prompted concepts like domaine which would have been unthinkable in the past. Until recently, sake producers were forbidden by law to grow rice. After this legislation changed, some breweries decided to control the whole process, growing their own rice and even irrigating it with the same water that will be used in the production process. Although a niche trend, some producers are studying differences between plots planted at varying elevations. This opens interesting, unexplored paths.
Some breweries are planting native, hard-to-grow, low-yielded varieties that disappeared decades ago to revive local styles of sake. Other trends include isolating indigenous yeasts or letting existing bacteria replace lab-produced lactic acid.

Proud of this local heritage, and eager to make sake more understandable to consumers, especially in the West, there is now growing interest in appellations of origin and seals that certify the origin of the ingredients. In 2016, Yamagata was the first prefecture in Japan to obtain a Protected Geographical Indication for sake. Currently only two prefectures (Yamagata and Mie) and three regions (Hakusan, Nada-Gogō and Harima) have been granted this seal. However, many tōji reject appellations. They see them as a straitjacket, which, instead of enhancing sake, standardises and limits freedom and creativity.

A number of wineries have started to make sakes with styles that resemble wine in an attempt to attract Western consumers, but also young Japanese drinkers, who still see it as an old-fashioned beverage. These are mostly fruit-driven, extremely aromatic style of sake made with modern yeasts and high rice polishing ratios intended to be enjoyed chilled in a wine glass; other styles include high-acidity examples made with white koji-kin or aged sakes. The aim in all cases is to attract new consumers in Japan and overseas. The latest development along these lines is Tanaka 1789, launched by Canadian sommelier François Chartier, a blend of different, tailor-made sakes which is something completely new in the category.

Although the range of sakes available in Spain is limited, a few importers sell directly to consumers and supply gourmet stores and restaurants. The two leading players, Shuwa Shuwa and Salvioni & Alomar, offer a diverse and carefully designed portfolio.

Shuwa Shuwa is the brainchild of Mayu, one of the few female sake sommeliers based in Spain. She runs an online store and an izakaya restaurant (see photo below) in the Salesas district in Madrid where sake courses are regularly held both for professionals and sake lovers. With its large by-the-glass selection, Shuwa Shuwa is the best place in Madrid to try a wide array of styles, discover your favourite style of sake and buy bottles to enjoy at home. 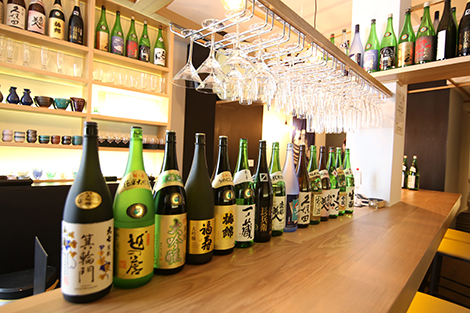 Salvioni & Alomar is a benchmark in the industry for their care and attention to detail and their efforts to win over a growing number of consumers. Manager Pablo Alomar hosts regular tastings and courses. He has also created "The S&ake Club", a monthly membership club featuring mystery sakes and tasting notes which work as a great and reasonably priced introduction to this drink.

There are two main types of sake: futsuu-shu and tokutei meishō-shu. The first may have external additives like distilled alcohol, sugar, molasses and flavourings. The second is known as premium sake and follows the industry’s quality guidelines such as the minimum amount of koji necessary for fermentation or the maximum amount of alcohol that can be added. The only ingredients allowed in premium sake are water, rice, koji, yeast, lactic acid and alcohol.

We have listed three significantly different tokutei meishō-shu sakes to get off to a good start in this exciting world: a daiginjo (with higher rice polishing ratio), a surprising junmai and a OC (origin controlee) sake. 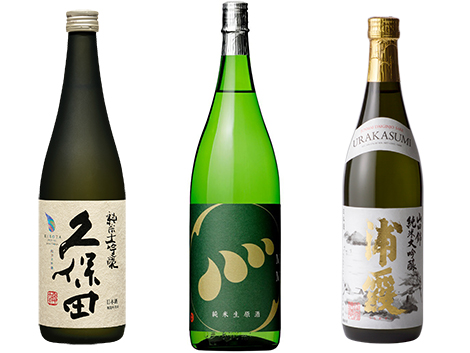 Urakasumi Junmai Daiginjo. Urakasumi is one of Japan's best-known brands. Produced in Miyagi prefecture in northern Japan, its name translates as "misty bay" and refers to the views from the brewery, which will soon be 300 years old. This is a classic Junmai Daiginjo (polished to 45% with no alcohol added) made with Yamadanishiki, the most prized rice for sakes with high levels of polish because it has a larger grain and perfect starch core. It is very aromatic, elegant and clean, with distinctive apple and pineapple aromas and a silky texture. Serve it at 10-12º C in a white wine glass. Drink as an aperitif or paired with sushi and light dishes.

Mutemuka Junmai Nama Genshu. This sake comes from Kochi Prefecture, an area in the island of Shikoku frequented by criminals and pirates. The region is well known for its creativity –yeasts have been sent into space and to the bottom of the ocean– and its large community of breweries and tōjis. Intended to be enjoyed with food, it is clean and has good acidity. Its forest-like aromas and flavours stand in contrast with its lightness. With notes of nuts, chestnuts, mushrooms and forest fruit on the background, it can be served either chilled (15ºC) or warm (45ºC) to enhance its sweetness. A genshu sake (no water added), it reaches 18% abv. It is also nama (unpasteurised) and has been aged at room temperature for six months to gain depth. Pair it with gyozas, stews and meats.

Find this sake for €35 at Shuwa Shuwa.

Kubota Junmai Daiginjo (OC Niigata). Niigata boasts the highest concentration of breweries in Japan. Its sakes have made a name for themselves thanks to its distinctive style called tanrei karakuchi: dry, clean, delicate and sharp as a Japanese sword (kire means cut). The Niigata OC appellation helps to preserve the style and guarantees the use of high quality local ingredients. An aromatic sake, Kubota displays tropical fruit (melon, pear, mango) notes and a balanced, round, enjoyable palate. Drink it on its own or paired with food at 10-12º C in a wine glass. It is produced with Gohyakumangoku, a variety of rice that is well adapted to the area’s cold climate and limits the enzyme activity of koji resulting in a dry, clean style only disrupted by a slightly sweet final note that invites to take another sip.