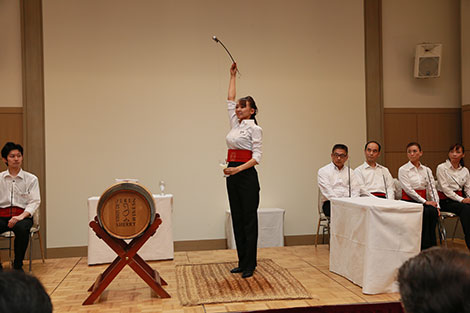 Tokyo has earned the title of Asia’s flamenco capital for its devotion to this traditional art and the large number of bailaoras (dancers) in the city but it seems to be vying for a second title - Asia’s venencia capital. A venencia is a special narrow cup fastened to a flexible shaft and used to ceremoniously serve sherry samples directly from the butt. This year, 72 Japanese contestants took part in the 14th edition of the Official Venenciadores Qualification Exams, which are supervised by professional judges from the restaurant trade led by César Saldaña, director of the appellations spanning the Marco de Jerez region.

Some of the eight finalists performed the task with elegance and composure while others lifted the venencia with the same rigidity and tension as if they were taking part in an army shooting competition. “I have been practicing for five hours every day during the last few months,” admitted a smiling Yoko Kamiya after claiming top spot. “I could only afford to practice with water, though”. She is a professional sommelier who works at Sky Tree’s French restaurant, a 623-metre tower with stunning views over Tokyo. “I am a French wine sommelier, but when I am asked to recommend something different I usually suggest sherry”, says Yoko, who hands me her business card featuring a half-filled glass in a Y shape.

Yoko’s case is increasingly common among professional sommeliers and wine aficionados in Japan who, over the last decade, have discovered the aroma, colour and flavours of sherry wines. The aesthetic component of the venencia is also important. Competitors get high points for their ability and showmanship with the venencia, a skill that is also valued by this year’s winner, who was initially attracted by the ability to maintain the flow of fino and pour it into the small copita.

Japanese love the precision and brevity of venencia. Both qualities are found in quintessential Japanese expressions such as haiku poetry, with only three verses, or sumo wrestling, where combats last a few seconds.

Technique is just one of the abilities needed to conquer the title. As well as the skills required to become a venenciador, participants must sit a written exam to test their knowledge of viticulture, winemaking, sherry wine history and the Appellation’s characteristics. César Saldaña, a competition jury since its start in 2002, believes there is much more beyond a demonstration of manual skills. “We are not interested in pantomime”, says the only jury to hold a points sheet in Spanish with the seven requirements needed to qualify: precision (pour the same amount of wine without spilling), height (distance between venencia and glass), speed of service, cut, general style, presence (clothing and presentation) and interaction with the public. The Spanish expert, whose promotional success is backed by the 130 official venenciadores certified across Japan, says that many contestants fail to pass despite their “robot-like” precision because they cannot tell the difference between manzanilla, amontillado and oloroso styles.

Sherry wines in Japan are better known thanks to the crucial support of individuals such as Yoshiko Akehi, founder of the official venenciadores exam, Spanish wine specialist and Sherry Wine Committee’s representative in Japan. Yoshiko spends a large part of her time visiting well-known vineyards or discovering wines in the most obscure locations across Spain and has recently published the first book ever written in Japanese about Spanish fortified wines. She has also been an invaluable support for places such as the Sherry Club, a renowned bar in central Ginza which has been serving sherry wines since the eighties, when the average Japanese person thought sherry wine was made with cherry juice.

The notoriety of Sherry Club increased after it appeared in the Guinness Book of Records as the bar with the most comprehensive variety of sherry wines in the world. This penchant for stocking an increasing number labels has taken over the country, according to the director of the Sherry appellation, who adds that growth in the Japanese market is limited to the number of brands. The next logical step should be a natural consequence of the popularity of venenciadores: a surge in the number of drinkers.

Sherry Club
Chuo Ku Ginza 6-3-17 Yugen Bldg. 2Fl. Tokyo.
An animated night of drinks and flamenco in Andalusia was enough for owner Michiko Takahashi to fall in love with sherry and open up this well-known bar full of Oloroso-scented barrels. Venencia, flamenco and Spanish food are always present. It made it onto the Guinness Book of Records in 2006 for its huge stock of sherry wines (227)

Bar Ollaría
Chuo Ku Ginza 7-2 (1Fl.). Tokyo
Also in Ginza, Ollaría displaced Sherry Club from the Guinness Book of Records serving yet a higher number of sherries (293). Its main attraction are its four venenciadores -two of them have won the annual competition in the past. Spanish ibérico ham is also served at this bar with a Spanish feel and an urban bistrot atmosphere.

Bar Roji
Shinjuku Ku Shinjuku 3-17-17 (B1-3F). Tokyo
The Japanese craze for highball drinks (watered down with water, soda or any non-alcoholic ingredient) has reached sherry too. Well-known for its roasted chicken yakitori, venenciadores need not apply for a job at this bar - sherry is served with soda. “A new highball style”, as its adverts claim.

Bar Venga!!
Chūkyō-ku Kawaramachi Tōri Takoyakushi kudaru
Hitosujime Iri ru Shioya-chō 671 - 1 LEX Bld. B 1 F
Kyoto visitors in search of a break from pagodas, zen gardens, incense smell and colourful kimonos should go to bar Venga!! “Let yourself be seduced by the charm of Spain and its sherry wines” is the slogan used to attract fans of amontillados, olorosos and finos in the ancient Japanese capital.

Spanish wine and Chinese food make a perfect match
Bodegas and tapas welcome visitors to Jerez
Tio Pepe comes of age and proves its longevity
Sherry 101: An introduction to styles and pairings
Top sherry wineries and tapas in El Puerto and Sanlúcar
El Maestro Sierra: a tale of courage and perseverance
A complete Sherry guide: our best articles about the region