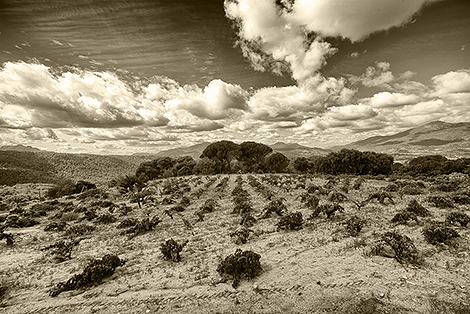 One of the pictures included in Pepe Franco’s photographic report on Gredos.

The world’s most beautiful winegrowing regions have been tamed by men for centuries. What impresses me most is people’s tenacity to build terraces, prune, grow and pick grapes in remote, inaccessible areas rather than the steep slopes or the staggering places where vines manage to survive. Despite very low yields, winegrowers have consistently worked in such vineyards for decades and have passed their knowledge onto the next generations.

Spain boasts many rugged, breathtaking winegrowing regions such as Gredos, less than an hour’s drive from Madrid.

Gredos is at a crossroads of provinces (Toledo, Ávila, Madrid), autonomous regions (Castilla-La Mancha, Madrid  and Castilla y León) and appellations: DO Méntrida, DO Vinos de Madrid and VT Castilla y León. Plans are underway to establish the new DO Cebreros, which would encompass vineyards in the province of Ávila.

We spent a couple of days visiting Gredos’ most significant vineyards and talking to the people who are working hard to put this beautiful region and its old Garnacha vineyards on the map. As you’ll see, Pepe Franco’s dramatic images speak for themselves. There is no better way to describe the beauty of La Viña Escondida (literally “hidden vineyard”), the smooth shape of Peña Caballera or Viña Bonita (“beautiful vineyard”), the steep slopes climbing towards Alto de Arrebatacapas (which translates as “the hilltop where cloaks are snatched away”) or the remote, isolated vineyards of Las Iruelas and Rumbo al Norte (literally “heading north”).

And what about the small, village wineries where all sorts of fermenting vessels are mixed together: amphorae, foudres, barrels or plastic vats? Winemaking methods seem to have gone back in time —the focus is a gentle approach with grape bunches being trodden like in the old days.

Perhaps, the deepest feelings conveyed by Pepe Franco’s images have to do with history and time: how long did it take for these landscapes to take shape, how long for vines to twist on themselves? Today, there is a group of young, adventurous winemakers fighting to preserve that legacy. Their goal: to capture history, landscape and soil in a bottle of wine.

Priorat: is it all about terroir?
Covarrubias, Tempranillo’s hidden playground
Toro: the land of hearty reds and old vines
Does terroir matter in Spain's appellations?
Rufete grapes put Sierra de Salamanca on the wine map
Comando G rescues old Garnacha vines in Gredos
Alimentaria 2018 On and Off: Less Merlot and more diversity
On the trail of minerality with Pedro Parra and Comando G
Building fruitful partnerships with cooperatives