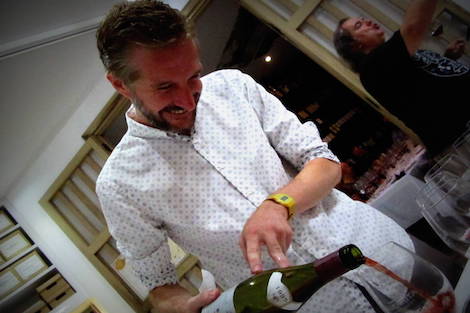 Armando Guerra, owner of Taberna der Guerrita and one of the leading contributors in the defense and promotion of Sherry wine culture in the last times, will move to Sanlúcar’s Barrio Alto to work with Bodegas Barbadillo, where he will head a newly created Premium Production and Innovation Division.

In this new department, tailor-made for the young tavern owner and with Barbadillo’s managing director as his only boss, Armando Guerra will have the freedom to do special sacas (drawing out wine from a solera for bottling), find forgotten and special casks among the 65,000 which are stored in Barbadillo’s various cellars in Sanlúcar and “showcase the winery’s fantastic wines which are very little known”.

The terms of the contract, which Armando has been negotiating for a year, state that he will have the freedom to organize his renowned summer tastings, which gather the who’s who of the Spanish wine world with names such as Pedro Ballesteros MW, Antonio Flores, Luis Gutiérrez, Ramiro Ibáñez, Envínate or Dani Landi, among others. Additionally, Armando will hire a person to take care of the day to day of the store but at the taberna it will be business as usual, he says.

His agreement with Barbadillo, one of the oldest sherry wineries in the region and producer of manzanillas like Solear en Rama, will prevent him from starting new projects with local producers, but Armando insists that the Guerrita store will continue distributing the wines that he has been selling until now.

“I relinquish to embark on new things but that’s compensated with all the new things that await for me here. Barbadillo is well regarded and has great potential so I am very excited about this new endeavor”, says Armando.

Tio Pepe comes of age and proves its longevity
Southern treasures (I): Manzanilla
Sherry 101: An introduction to styles and pairings
Top sherry wineries and tapas in El Puerto and Sanlúcar
Ramiro Ibáñez brings soils and terroir into Sherry country
Vinoble 2016 witnesses a change of cycle in Sherry
The essence of Pedro Romero lives in Sanlúcar
Barbadillo or the courage to tackle changes
A complete Sherry guide: our best articles about the region